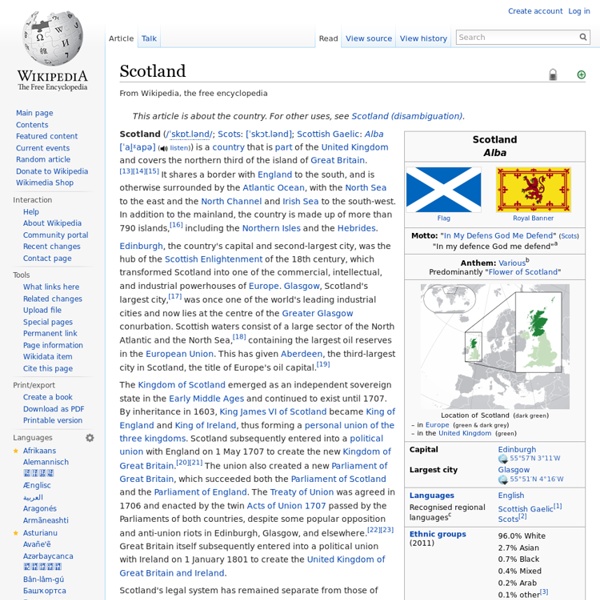 Facts and figures about Scotland National Symbol and flag Scotland is in north-west Europe and is part of Great Britain, an island country ( See map ) and the United Kingdom (UK) . Scotland is a mountainous country in the north of the island of Great Britain and shares a land border to the south with England and is bounded by the North Sea on the east and the Atlantic Ocean on the west. Its capital city is Edinburgh. Scotland has some 790 islands - 130 inhabited. Its fresh water lochs (lakes) – there are over 600 square miles of them. It is also famous for its clans, kilts, medieval castles, as well as poetry and songs of Robert Burns. Theatre lovers from around the world come to Edinburgh for its famous theatres festival. Famous Scots include: Walter Scott, Robert Louis Stevenson, Arthur Conan Doyle, David Hume and the actor Sean Connery. Famous musicians of Scotland include Annie Lennox, Wet Wet Wet, Travis and Simple Minds. Edinburgh was the first city in the world which had its own fire-brigade. Country Facts Wales

Scottish people This article is about the Scottish people as an ethnic group. For residents or nationals of Scotland, see Demographics of Scotland. There are people of Scottish descent in many countries other than Scotland. Ethnic groups of Scotland[edit] In the Early Middle Ages, Scotland had several ethnic or cultural groups labelled as such in contemporary sources, namely the Picts, the Gaels, the Britons, with the Angles settling in the southeast of the country. Use of the Gaelic language spread throughout nearly the whole of Scotland by the 9th century,[21] reaching a peak in the 11th to 13th centuries, but was never the language of the south-east of the country.[21] The Northern Isles and some parts of Caithness were Norn-speaking (the west of Caithness was Gaelic-speaking into the 20th Century, as were some small communities in parts of the Central Highlands). Scottish ancestry abroad[edit] Areas with greatest proportion of reported Scottish ancestry in the United States. Netherlands[edit]

Education in Scotland Traditionally, the Scottish system at secondary school level has emphasised breadth across a range of subjects, while the English, Welsh and Northern Irish systems have emphasised greater depth of education over a smaller range of subjects. State schools are owned and operated by the local authorities which act as Education Authorities, and the compulsory phase is divided into primary school and secondary school (often called high school). Schools are supported in delivering learning and teaching by Education Scotland (formerly Learning and Teaching Scotland). There are also private schools across the country, although the distribution is uneven with such schools in 22 of the 32 Local Authority areas. Qualifications at the secondary school and post-secondary (further education) level are provided by the Scottish Qualifications Authority, which is the national awarding and accrediting body in Scotland, and delivered through various schools, colleges and other centres. School years[edit]

Scotland Facts - Geography, Symbols, Traditions & Trivia Whatever reason you have for tracking down facts about Scotland, you're going to be happy you landed on this page :) From the geography and people of Scotland, to Scottish symbols, famous Scots and unique wildlife - the list is as fascinating and diverse as the country itself. Enjoy! Scotland - Geographical Facts There are some very diverse landscapes crammed into this small country! From gently rolling hills, to heavy industrialized cities, to awe-inspiring mountains and rugged and remote islands. Scotland is the northern section of the United KingdomIt covers an area just over 30,000 sq. miles, which is about 1/3 of the total UK landmassScotlands' population only accounts for about 10% of the UK figure. The Highlands & Islands This region covers about 50% of Scotlands' landmass and has the wildest and most dramatic scenery. The most northern group of Scotlands' Islands are the Shetland Isles, and they are culturally closer to Norway than to Scotland. Scottish Symbols Scottish Trivia

Visit the Highlands of Scotland - accommodation activities attractions and events Standard Grade Standard Grades (Scottish Gaelic: Ìre Choitcheann) are Scotland's educational qualifications for students aged around 14 to 16 years, which are due to be fully replaced when Scottish Qualifications Authority's Higher Still system becomes the main qualifications as part of the major shake up of Scotland's education system as part of Scottish Credit and Qualifications Framework overhaul. Scottish Standard Grades roughly equal the English General Certificate of Secondary Education (GCSE) Examinations in terms of level subject content and cognitive difficulty.[1] History[edit] Following the Munn and Dunning reports, the Standard Grade replaced the old O-Grade qualification, and was phased in from then onwards. Students will typically study 8 subjects at Standard Grade. Levels of award[edit] Students are awarded a numerical grade for each examination (which may consist of several papers) ranging from 1 (best) to 7. Higher Still[edit] Standard grade subjects[edit] Compulsory subjects[edit]

Crail Coordinates: Crail ( listen ); Scottish Gaelic: Cathair Aile) is a former royal burgh in the East Neuk of Fife, Scotland. History[edit] James V, the father of Mary Queen of Scots, sent for his wife, Marie de Guise, whom he had recently married by proxy in Paris, and she landed in Crail in June 1538. Architecture[edit] Crail Tolbooth (on the left) The large kirkyard surrounding the building has a fine collection of mural monuments dating from the late 16th century on. Other historic buildings in Crail are the tollbooth, with a tower dating from about 1600, which stands on its own in the large marketplace, and the doo'cot (Scots for dovecot) of the town's otherwise vanished Franciscan Friary. Crail once had a royal castle above the harbour (perhaps this was the site of the 'fort'). The Tolbooth in the centre of the town has a characteristic tower and a European style roof, similar to buildings in Holland. Carboniferous fossils[edit] Sport[edit] Aerodrome[edit] Gallery[edit] See also[edit]

Scottish Qualifications Authority The Scottish Qualifications Authority (SQA) (Gaelic: Ùghdarras Theisteanas na h-Alba)[1] is the executive non-departmental public body of the Scottish Government responsible for accrediting educational awards. It is partly funded by the Education and Lifelong Learning Directorate of the Scottish Government, and employs 750 staff based in Glasgow and Dalkeith.[2] SQA is best known for the delivery of the annual diet of public examinations within Scotland for school pupils. SQA Higher examinations are the general acceptable level for entry to university, with Scottish universities usually requesting a minimum of 3 Highers, all above C level. However, a greater number of candidates of all ages participates in SQA specialist, vocational and higher education qualifications. History[edit] Qualification types[edit] SQA has a statutory responsibility to provide public examinations for Scottish state schools, though these are also used more widely. National Qualifications[edit] Partnerships[edit]

Fife Fife ([ˈfəif]; Scottish Gaelic: Fìobha) is a council area and historic county of Scotland. It is situated between the Firth of Tay and the Firth of Forth, with inland boundaries to Perth and Kinross and Clackmannanshire. It was once one of the major Pictish kingdoms, known as Fib, and is still commonly known as the Kingdom of Fife within Scotland. It is a lieutenancy area, and was a county of Scotland until 1975. It was very occasionally known by the anglicisation Fifeshire in old documents and maps compiled by English cartographers and authors. A person from Fife is known as a Fifer. Fife is Scotland's third largest local authority area by population. The historic town of St Andrews is located on the northeast coast of Fife. History[edit] Fife, bounded to the north by the Firth of Tay and to the south by the Firth of Forth, is a natural peninsula whose political boundaries have changed little over the ages. Fife became a centre of heavy industry in the 19th century. Governance[edit]