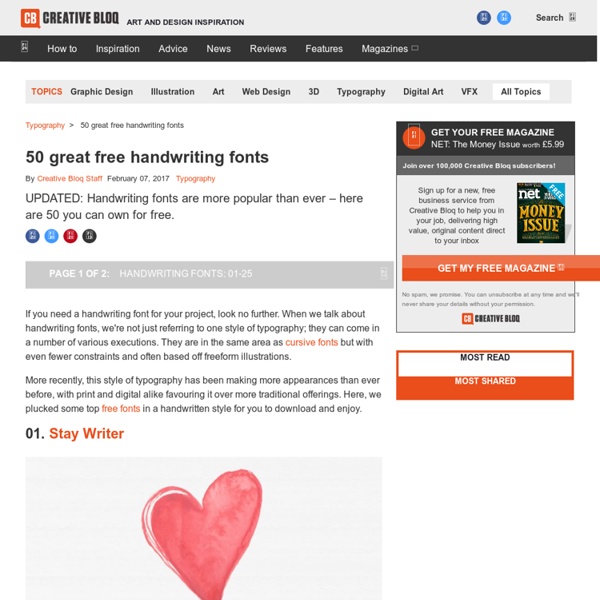 If you need a handwriting font for your project, look no further. When we talk about handwriting fonts, we're not just referring to one style of typography; they can come in a number of various executions. They are in the same area as cursive fonts but with even fewer constraints and often based off freeform illustrations. More recently, this style of typography has been making more appearances than ever before, with print and digital alike favouring it over more traditional offerings. Here, we plucked some top free fonts in a handwritten style for you to download and enjoy. 01. Charming handwriting font Stay Writer was created by graphic designer and illustrator Syed Faraz Ahmed. 02. Handwriting font SoulMarker was created by graphic designer and illustrator Faraz Ahmad. 03. The team at Australian-based design agency Team Scope are behind handwriting font Claire Hand. 04. "This is a one-day font," says Cavorting typeface creator Missy Meyer. 05. 06. 07. 08. 09. 10. 11. 12. 13. 14. 15.

10 Free Light and Minimalistic Fonts Our 100 best free fonts has been a hugely popular post on the site with thousands of shares and downloads – creators get the recognition they deserve and everyone gets free fonts, it’s a win-win. However that list has all sorts of free fonts jumbled up all together. One type of font that has become extremely popular is your light and minimalistic fonts which companies like Google and Apple are using, especially on large background images. It’s a great style that works because the font size is usually huge and sentences are very concise, making it easy for readers to know what they’re reading quickly.

653 free typography resources From free learning resources to free fonts, free apps and beyond. We all love free stuff, and the internet is full of it. But the time taken to sift through all the low-quality free tutorials, fonts and other resources can often be a false economy. To help you out, we consistently trawl the web and find the diamonds in the rough. Then we collect them together in articles that let you find what you're looking for quickly and easily. In this mega-post, we bring together all the best freebies for typography - all 653 of them!

15 Free Fonts for Your Minimalist Design “Minimalism? It is something I appreciate as an art form but leave to others – unless you count a collection of warhorse-workwear Yves Saint Laurent trouser suits. Maybe my penchant for hippie-deluxe eccentricity came from an escapist dream of a different world. It was tough being a working mom in the 1970s.” 101 best free fonts of 2016, so far 2016 has been one of the best years for type design in decades. The lettering craze has pushed a lot of illustrators towards digitizing their work. There’s a ton of great font software available these days. And with typography now recognized as one of the most important aspects of a website, everyone wants in on the act. In past years we’ve seen a few narrow trends dominating, but so far this year it’s very diverse. There’s fewer crazy experimental typefaces around, but also fewer staid sans-serifs; everyone’s meeting somewhere in the middle.

Download 30 free graffiti fonts In recent decades, graffiti has moved from an urban nuisance to a professional business thanks to the rise of street art as a serious creative force. And with the artform ever growing in popularity, there are now a wealth of graffiti font styles available online for creatives to use as the typography in their urban artwork. Here, we've scoured the web to find you the best examples of free fonts in a graffiti style for designers. Enjoy! 65 best free fonts, Spring 2015 So far, 2015 has been a bumper year for fonts, with dozens of new designs going live. There are a couple of dominant trends, both carried over from last year. The first is the ongoing influence of lettering that gives us great typefaces like Gallow Tree. The other is a love of expressive geometric sans, in designs like Ohmega Sans. Today, we’ve compiled a list of the best free fonts that have been released, or received a major update, in the first three months of 2015.

Anson font - By Mikko Nuuttila The Avro Anson is a British twin-engine, multi-role aircraft that served with the Royal Air Force, Fleet Air Arm, Royal Canadian Air Force and numerous other air forces before, during, and after the Second World War. Named after British Admiral George Anson, it was originally designed as an airliner as the Avro 652 before being redeveloped for maritime reconnaissance, but was soon rendered obsolete in both roles. However, it was rescued from obscurity by its suitability as a multi-engine air crew trainer, becoming the mainstay of the British Commonwealth Air Training Plan. By the end of production in 1952, the Anson spanned nine variants; a total of 8,138 were built in Britain by Avro. Glober free font The Glober font family includes 18 weights – nine uprights with nine italics. It is characterized by excellent legibility in both – web & print design areas, well-finished geometric designs, optimized kerning, excellent web-font performance and legibility etc. Inspired by the classic grotesque typefaces – Glober has his own unique style in expressed perfect softened geometric forms.