Light Up Name Tag. A Simple and Cheap Dark-Detecting LED Circuit. Here’s a simple problem: “How do you make an LED turn on when it gets dark?” 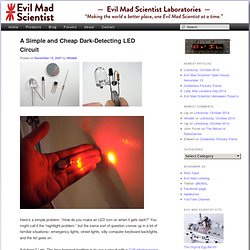 You might call it the “nightlight problem,” but the same sort of question comes up in a lot of familiar situations– emergency lights, street lights, silly computer keyboard backlights, and the list goes on. Solutions? Lots. The time-honored tradition is to use a circuit with a CdS photoresistor, sometimes called a photocell or LDR, for “light-dependent resistor.” (Circuit Example 1, Example 2.) Glow Doodle. Makey Makey Monome. Jenna deBoisblanc’s MaKey MaKey Monome musical instrument. 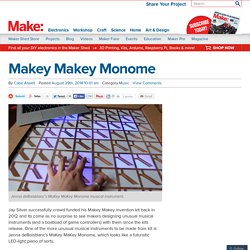 Jay Silver successfully crowd funded his Makey Makey invention kit back in 2012 and its come as no surprise to see makers designing unusual musical instruments (and a boatload of game controllers) with them since the kits release. One of the more unusual musical instruments to be made from kit is Jenna deBoisblanc’s MaKey MaKey Monome, which looks like a futuristic LED-light piano of sorts. Jenna designed the touchscreen musical instrument using the invention kit along with some NeoPixels, some copper tape and cardboard. The cardboard acts as the latticework that houses the individually addressable LEDs that light-up the instrument’s squares, which is covered by a 22-inch piece of glass covered on the bottom with white paper to diffuse the light. 64 copper triggers are positioned over the glass, light the corresponding LED and generate a tone when touched. 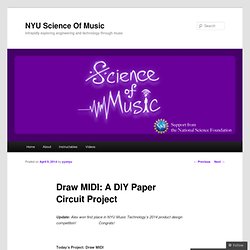 Draw MIDI. Piano code. Work with Shape-Memory Alloy. We’re very pleased to have Jie Qi on MAKE for our Advanced Materials month (which has been extended until Feb 6). Her bio is so impressive, I thought I’d post the entire thing: I was born in China and moved to the US when I was 6… Fast forward to college at Columbia University. I started out a pre-medical/biomedical engineering major and spent a semester and summer doing tissue engineering research in the MBL group. That same summer, I got an internship in Brooklyn building sculptures out of bottles for Aurora Robson, through which I fell in love with art again. Light-emitting Diodes (LEDs) MIDI Connector - Female Right Angle - PRT-09536. Www.bisnet.or.id/vle/pluginfile.php?file=%2F14870%2Fmod_resource%2Fcontent%2F0%2F7J-_CAT_Test_Yourself_and_Answers_Unit_Test.pdf. Beyond the Museum: Tinkering with Paper Circuits. One of the things that we are currently thinking about in the Tinkering Studio is how we might translate work we are doing on the floor of the museum to after school programs, classrooms, and other formal and informal educational settings. 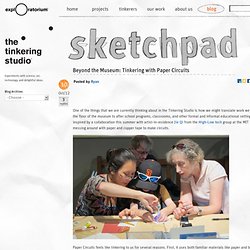 Papercraft Automata Race Game littleBits Circuit. Gather the following modules: 4 Wire (w1)1 Fork (w7)2 Button (i3)1 Sound Trigger (i20)1 Power (p1)1 Arduino (w6) On the Fork module, connect the Wire Out end to the first branch and the Wire In to a Button (i3) module Do the same thing on the second branch and connect a second wire to the remaining button. 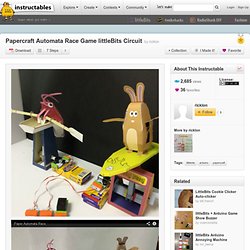 On the last branch, connect the Sound Trigger (i20) module. Series and Parellel Circuits. Cardboard: It Makes a Village (and Some Cool Kinetic Creatures) LEFT — Me to this kid: “Is that a bionic arm or something?” 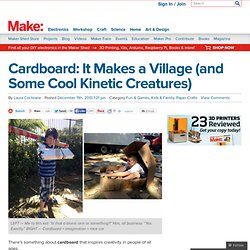 Him, all business: “Yes. Exactly.” Kinetic Creatures: Elephant. Papercircuits.pdf. The Animatronics Workshop. So you’ve decided to build your own animatronic show. 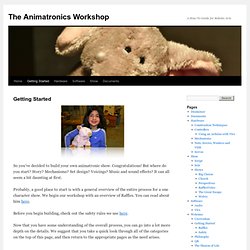 Congratulations! But where do you start? Story? Mechanisms? eTextiles: How to Make a Pressure Sensor. How to make electrically conductive paint. Origami Robots Fold Themselves And Walk Away. Paper_circuits.pdf. Circuit Card Prototypes. After lugging our set of wooden electricity boards to Milan for our 'Intro to tinkering workshop' (see video for evidence of our packing moment of zen), I started thinking about making a lighter and more portable version of the activity to take for offsite conferences and workshops. 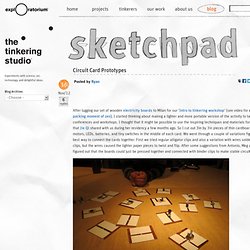 I thought that it might be possible to use the inspiring techniques and materials for paper circuits that Jie Qi shared with us during her residency a few months ago. So I cut out 3in by 3in pieces of thin cardboard and mounted motors, LEDs, batteries, and tiny switches in the middle of each card. We went through a couple of variations figuring out the best way to connect the cards together. First we tried regular alligator clips and also a variation with wires soldered to paper clips, but the wires caused the lighter paper pieces to twist and flip. Inside/Out Notebooking — NEXMAP. Digital Is. Cross-posted from the NEXMAP blog. 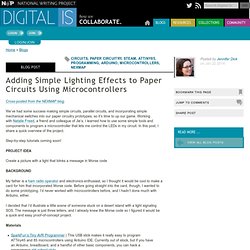 We’ve had some success making simple circuits, parallel circuits, and incorporating simple mechanical switches into our paper circuitry prototypes, so it’s time to up our game. Working with Natalie Freed, a friend and colleague of Jie’s, I learned how to use some simple tools and components to program a microcontroller that lets me control the LEDs in my circuit.

In this post, I share a quick overview of the project. Step-by-step tutorials coming soon! Create a picture with a light that blinks a message in Morse code. Tiny AVR Programmer - PGM-11801. Digital Is. Reposted from my blog. 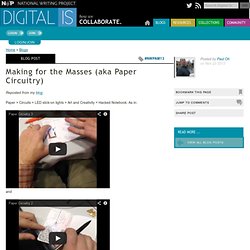 Paper + Circuits + LED stick-on lights + Art and Creativity = Hacked Notebook. As in: and This low-cost, lo-fidelity making happened this week at the National Writing Project’s Annual Meeting, Jie Qi of MIT’s Media Lab along with her collaborators David Cole, Jennifer Dick and me representing my org, helped a group of teachers turn their notebooks – that icon of the writing class - into a mashup of technical and artistic interactivity.

Makes.lmnob.com/resource/PaperCircuitry.Booklet.Nov2013.pdf. Digital Is. As a professional artist, deepening the ways in which seemingly disparate objects and processes are interconnected through locating, and mapping their intersections has been one of the main elements of my studio practice. The Fab Lab tools and working processes create an environment that is well suited to investigating those types of intersections. In an effort to integrate Fab Lab tools centered on craft, and studio-based processes into the classroom, I have been working to implement a Mobile MakerCart at a project-based K-8 charter school.

In addition to introducing craft-based physical computing projects to the children, a guiding principle behind the MakerCart is to give teachers the opportunity to develop familiarity with the MakerCart’s tools and processes in order to be able to envision the ways in which they might be able to develop their own curriculum for use in the classroom. MaKey MaKey Piano-2 on Scratch.

Flexinol Actuator Wire. Work with Shape-Memory Alloy. Animated Vines. Electronic Origami Flapping Crane w/ tutorial. Paper Circuit: Parallel with Pressure Switch. Paper circuits are a great way of adding light to your drawings, origami, or papercraft creations. Instead of using wires to connect a battery to LEDs, paper circuits use conductive metal tape. You may want to try the Make: Project Simple Paper Circuit first, which appears alongside this project on the one page paper circuit PDF, designed for easy reference in educational settings. Chibitronics. Circuit Sticker Video Tutorials. Interactive Papercraft Insect Collection. January 3, 2013 AT 12:04 am Samantha Moore writes: I am a huge fan of entomology displays, and wanted to create one that is interactive.

When the copper tape on the surface of the frame is touched, the butterflies illuminate through a capacitive touch sensor. The blank white strip of paper to the side of each butterfly shows the name, scientific and common, for a bit of unexpected learning.I created a box frame that is deep enough to house the paper butterflies along with the Arduino and breadboard. Paper Circuitry at Home: Electric Origami. Simple Paper Circuit. Electronic origami: Input/Output blintz folding. Paper Animatronics. Animatronics grew out of the desire to break the limitations of animated films to bring characters into the real world.

Our goal is to create the illusion of life with electronic creatures of our own design to tell an original story. Traditionally, animatronics has been the sole province of highly skilled artists and engineers working with complex mechanisms, found in theme parks. The exquisite entertainment robots they created often cost as much as a house, each. But you can build your own simple animatronic shows using inexpensive and readily available materials.