Stream PC Desktop to Phone for Virtual Reality (Now with Head tracking!) There are five programs that I use to stream my desktop to my phone/iPod. 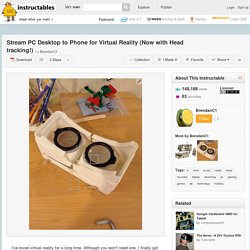 All of them have different pros and cons. 1. Kinoni Remote Desktop is probably the least laggy streamer out there. It can be downloaded at Pros: I ran many games like Portal and saw no perceptible lag while in game. High framerates. Free! Cons: The audio quality isn't great. Android only. 2. Built in head tracking? Relatively high framerates. Head tracking needs a some work. Costs money (5.27 USD for the app; the PC streamer is free) 3. Kainy can stream up to 60 FPS (frames per second) with minimal lag. Free version has ads, which makes it unsuitable for VR gaming. Android only. 4. Pros: iOS AND Android compatibility! Free on Android! Slow, especially on iOS devices. Costs money for the iOS app (5 USD) Singapore Hobby Supplies Pte Ltd. OKHOBBY - Mega Power Gemini-2014 Duo 300W + 300W Twin Charger. MEGA POWER GEMINI-2014 DUO is the world's most prominent Korean models used charger in the business design and production, the global 70 percent of models used charger are its factory production, including Germany, France, Britain, the United States, Japan, a line manufacturers are using such products quality and performance has been deeply the love users are certain that the product adopts double-the-designed two group terminal at the same time for two battery, and two battery without specifications, each group terminal may be the lithium polymer (Li-Poly 1-7 S), lithium-ion (Li-ion 1-7 S), lithium iron (Li-Fe 1-7 S) and nickel-cadmium (Ni-Cd 1 ~ 18 cell), nickel-hydrogen (Ni-MH 1 ~ 18 cell, lead accumulator batteries (Pb 2~24 V) and the most used batteries, whether for battery power, transmitters and receivers battery can a machine out single terminal with 20 A/300 W (total and power 600 W) super-strong charging power to make your charging more efficient. 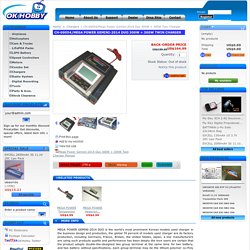 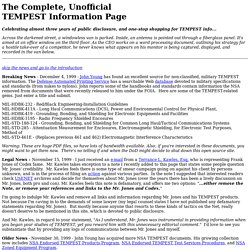 Across the darkened street, a windowless van is parked. Inside, an antenna is pointed out through a fiberglass panel. It's aimed at an office window on the third floor. Dell Alienware 13 Drivers for Windows 8.1 64bit - Helpexe ~ All Laptop Desktop and Printer Drivers. Drag Force - Wright 1903 Flyer. Getallen_voor_modelbouwers.pdf. Mool. Circuit Simulator Applet.

This is an electronic circuit simulator. 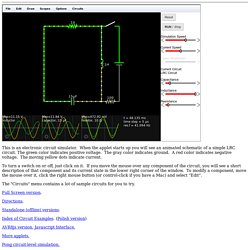 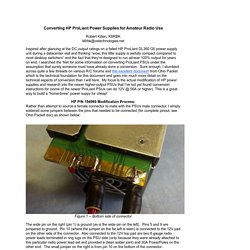 Sure enough, I stumbled across quite a few threads on various R/C forums and this excellent document from Ohio Packet which is the technical foundation for this document and goes into much more detail on the technical aspects of conversion than I will here. All projects. Server Power Supply Interface Board - for standalone miners and GPU rigs.

First "complete" prototype finished and undergoing testing; as soon as a reliable source of parts can be found I'll start on actual production. 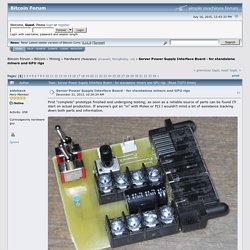 If anyone's got an "in" with Molex or FCI I wouldn't mind a bit of assistance tracking down both parts and information. This board is designed to mate with a Dell Z750P power supply from a PowerEdge 2950; said supplies can be found fairly readily on eBay in various conditions for as low as $12. Notes on the Troubleshooting and Repair of Small Switchmode Power Supplies. Showthread. Come fly with me/K-6/Activities 1 - 44. Come Fly With Me! 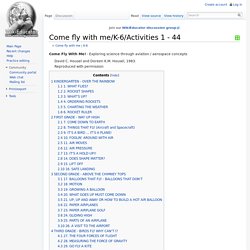 - Exploring science through aviation / aerospace concepts David C. Housel and Doreen K.M. Housel, 1983. GimBall 1 minute presentation. Autonomous ball drone bounces off anything. An article in the Journal of Field Robotics describes the first tests of the GimBall, a drone that appears pretty indestructable, even during flight. 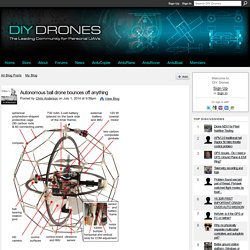 The drone is designed to literally collide with objects and continue moving. To make this possible, the team trades obstacle-detecting sensors for a spherical rigid frame that can roll on and around obstacles while in flight, protect against debris, and propel it along the ground. It looks like this: Image: Journal of Field Robotics The drone was also tested in a series of pre-programmed autonomous flights in a fairly thick forest. The algorithm ordered GimBall to fly up to an altitude of a meter, then to head north until the "end of [the] experimental area. " Bienvenue à Bray-dunes - Site officiel de la ville de Bray-Dunes 59123. Index of /remotes. Free 3D CAD with Motion Simulation : freeCAD Tutorials.

It is made from EPO and is the larger version that Hobbyking carries. Think it is originally from a company called DZ-Hobby. My plans with the Icon is to get a reliable and stable flyer that later will see fpv usage. The ability to start and land from both land and water is very appealing to me, and certainly helps to increase the accessibility of this model. Here are some pictures of the build so far. Thread Gallery - RC Groups. THIN FOAM HOT-WIRE CUTTING PROGRESS REPORT (aka Good Riddence to Shims) How to Fly a Walkalong Glider Using Controllable Slope Soaring - ControllableSlopeSoaring. Good designs for walkalong gliders must be stable in freeflight and fly slow enough that a person can keep up with the glider as it flies. 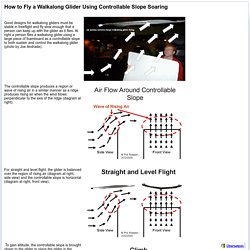 For straight and level flight, the glider is balanced over the region of rising air (diagram at right, side view) and the controllable slope is horizontal (diagram at right, front view). To gain altitude, the controllable slope is brought closer to the glider to place the glider in the region of maximum lift. Banking the glider is achieved by angling the controllable slope relative to the horizontal. How Do Aircraft Fly? If you're new to the hobby or new to flying you'll be wondering, "How do Airplanes Fly? " Well I hear you! This article is intended to be fairly easy to understand but still have all the information and explanations aswell. 1. The Forces On An Aircraft Every aircraft no matter shape, size, wing area or pilot for that matter all experience the same forces; Lift, Thrust, Gravity and Drag. Before looking into that we must first understand that the air we breath is filled with small molecules.

How Do Winglets Work? Disclaimer: I do not own any of the images used in this article. They are solely being used for your education purposes and not for advertisement or to gain revenue of any sort. Good that's out of the way. CAS-cozy site AOA-page. What is AOA , angle of attack? Angle between the relative wind and the chord of the airfoil. 36_DASH_QH-50.pdf. NichromeCalc. Click here to return to nichrome wire sales page Use this calculator to find the right nichrome wire size, length and power supply for your application.

Snelflight Hoverfly. How the Hoverfly Works. The Hoverfly uses an unique method to generate lift and cyclic functions that give you the control and feel of a conventional radio control helicopter. The Hoverfly is very lightweight and employs a very low rotor speed making it safe for indoor use. Rise of the Multicopter. Written by Paul Gentile As featured on page 46 the December 2012 issue of Model Aviation. As featured in the Model Aviation tablet app. Home. A Robust Head Tracking System Based on Monocular Vision and Planar Templates. 1. Introduction Latest advances in technology and the growing computational capabilities of desktop computers have allowed the introduction of new devices for human-machine interaction. These devices usually provide functionalities to substitute the computer mouse.

In the last years, new devices to estimate the real position of the user's head in real time under certain constraints have been developed. Most of these devices rely on cameras and image processing algorithms. 2DoF head tracking applications and products are easy to find. On-line CRC calculation and free library. Whenever digital data is stored or interfaced, data corruption might occur. Since the beginning of computer science, people have been thinking of ways to deal with this type of problem. For serial data they came up with the solution to attach a parity bit to each sent byte. Spektrum Telemetry Module. Bridging the Telemetry from and APM Quadcopter Controller to a Spektrum Telemetry Module I came across this post on the RCGroups forum describing how to interface into the Spektrum Telemetry Module and send your own telemetry to a Spektrum radio.