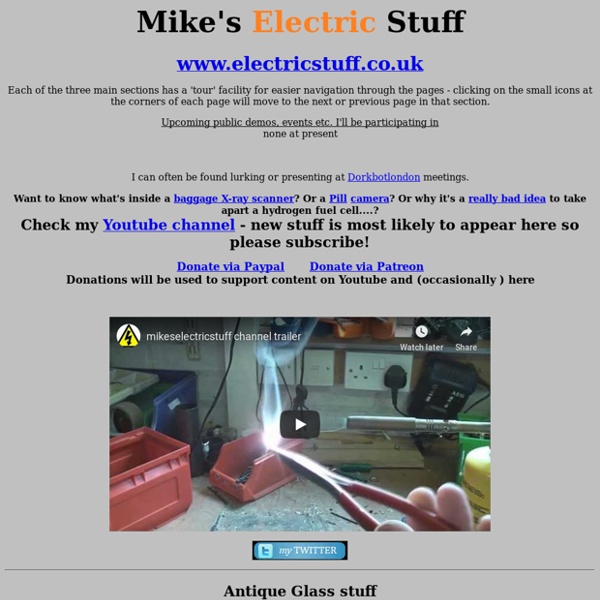 Circuit Simulator Applet This is an electronic circuit simulator. When the applet starts up you will see an animated schematic of a simple LRC circuit. The green color indicates positive voltage. To turn a switch on or off, just click on it. The "Circuits" menu contains a lot of sample circuits for you to try. Full Screen version. Directions. Standalone (offline) versions. Index of Circuit Examples. More applets. Javascript version. Report a problem/feature request Huge thanks to Iain Sharp for the Javascript port. java@falstad.com

Learn Bil Herd’s DIY Surface Mount Assembly Process You can do your own Surface Mount Technology based PCB assembly with just a handful of tools and some patience. At the heart of my SMT process is stopping to inspect the various steps all while trying to maintain a bit of cleanliness in the process. Surface mount or Surface Mount Technology (SMT) is the modern way to assemble Printed Circuit Boards (PCB) and is what is commonly seen when opening a modern piece of tech. It’s much smaller than the older Through-Hole (TH) technology where the component leads were inserted into holes in PCB, and act we called “stuffing” since we had to stuff the components into the holes. A few specialized tools make this a lot easier, but resourceful hackers will be able to pull together a solder paste stencil jig, vacuum tweezers, and a modified toaster oven with a controller that can follow the reflow profile of the solder paste. Component Size Matters Surface mount package names can be a little bit confusing. Caring for Solder Paste Applying the Solder

eCircuit Center Bipolar junction transistors as switches : Worksheet Question 1: Solid-state switching circuits usually keep their constituent transistors in one of two modes: cutoff or saturation. Explain what each of these terms means. "Cutoff" refers to that condition where a transistor is not conducting any collector current (it is fully off). "Saturation" means that condition where a transistor is conducting maximum collector current (fully on). Notes: In all fairness, not all transistor switching circuits operate between these two extreme states. Question 2: Explain the function of this light-switching circuit, tracing the directions of all currents when the switch closes: Notes: Ask your students to explain what possible purpose such a circuit could perform. Question 3: Trace the directions of all currents in this circuit, and determine which current is larger: the current through resistor R1 or the current through resistor R2, assuming equal resistor values. I'll let you determine the directions of all currents in this circuit! Question 4: Question 5:

Catalog of 150 open-spec, community-backed Linux SBCs under $200 Our 2021 catalog of 150 open-spec, maker-oriented SBCs that run Linux or Android provides updated prices and descriptions plus a comparison spreadsheet of major features. The following summaries of 150 community-backed and predominantly open-spec Linux/Android hacker boards under $200 are listed in alpha order. They list specs and lowest available pricing recorded in the last two weeks of December 2020 with products either shipping or available for pre-order with expected ship date by 2Q 2021. Please also check out our introduction article covering the latest community-backed SBC trends (see link below). Alphabetical index: Low-power Arm hacker board classic keeps it fresh with add-onsCompany/project — OlimexProduct pageProcessor — Allwinner A20 (2x Cortex-A7 @ 1GHz); Mali-400 GPUMemory — 1GB DDR3 RAM; opt. 8GB eMMC, 8GB NAND, and 16GB eMMCPrice — $49 (40 Euros); 48 to 60 Euros ($73) for ext. flash versions Arduino returned in 2018 with a reboot of its original, MIPS-based Arduino Yun.

Electronic Circuits on Circuit Exchange International (CXI) Raspberry Pi: Tutorials, Models, How to Get Started With more than 34 million units sold, the Raspberry Pi is not only one of the world’s most popular computers; it’s also one of the most important. Originally designed to help kids learn about technology, this inexpensive single-board system is the leading choice for makers, developers and hobbyists who want to do everything from building industrial robots to setting up retro arcade machines. Whether you’re eight or 80, if you love technology, the Raspberry Pi is made for you. And with models ranging in price from $4 to $75, anyone can afford to buy one. Here’s what you need to know to make the most of Raspberry Pi. Choosing a Model and Getting Started with Raspberry Pi If you don’t own a Pi, you should definitely get one. The recently-released Raspberry Pi Pico carries the Pi name but is a completely different kind of board. For every Pi model, except the Raspberry Pi Pico, you’ll also need: A microSD card of at least 16GB. What You Do with a Raspberry Pi Adding Raspberry Pi HATs GPIO Pins

Jones on Stepping Motor Types - Мозилин фајерфокс (Mozilla Firefox) Introduction Stepping motors come in two varieties, permanent magnet and variable reluctance (there are also hybrid motors, which are indistinguishable from permanent magnet motors from the controller's point of view). Lacking a label on the motor, you can generally tell the two apart by feel when no power is applied. Stepping motors come in a wide range of angular resolution. For both permanent magnet and variable reluctance stepping motors, if just one winding of the motor is energised, the rotor (under no load) will snap to a fixed angle and then hold that angle until the torque exceeds the holding torque of the motor, at which point, the rotor will turn, trying to hold at each successive equilibrium point. Variable Reluctance Motors Figure 1.1 The cross section shown in Figure 1.1 is of 30 degree per step variable reluctance motor. To rotate this motor continuously, we just apply power to the 3 windings in sequence. Unipolar Motors Figure 1.2 Bipolar Motors Figure 1.3 Bifilar Motors

Soldermans Basic Electronics: Binary and Hex - Мозилин фајерфокс (Mozilla Firefox) Computers understand numbers and logic, as most are digital computers. The Binary Hexadecimal System is the way the numbers or logical commands are instructed to the computer. All input devices or sensors must finally talk this language to the CPU, and all outputs and actuators must be able to understand this numbers to do their job. A bimetallic thermostat is like a simple mechanical computer. Where the bimetal response is the sensor input, the contacts are the output to actuator and the bimetal thermal behavior is of the nature of intelligence. Bit is 0 or 1 ... one digit ... 0 could be 0 volts and 1 five volts.Nibble is four bits, 4 digits, like 0010 , in hex a nibble is 0 to F.Byte is eight bits, 8 digits, like 1100 0010 , in hex 00 to FF.BCD binary coded decimal is binary code for numbers 0 to 9.Learn more by reading asciicat here.