How and why to use whom in a sentence 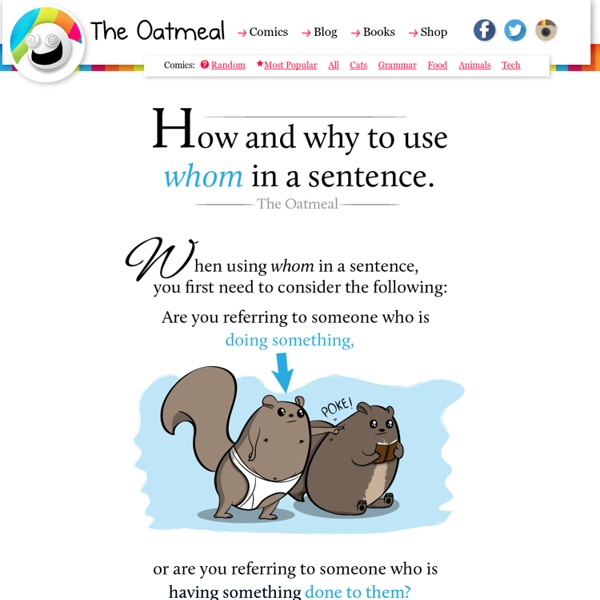 Online English Vocabulary Size Test Ever wonder about your vocabulary size? Even if you are a daily English speaker or a native English speaker, you still might find this test challenging! We conducted academic research and looked at online resources to design the model of this quiz. We believe we've prepared the best quiz for you!English | Français | Deutsch | EspañolPortuguês | Italiano | Polski | Русский | 中文(汉语)ภาษาไทย | Bahasa Indonesia | 日本語 | 한국어Nederlands | Dansk | Suomi

Start Here New to Keeper of the Home? Welcome! We’re so glad you’re here! I know it can be challenging to find your way around a new website. Why do we capitalize I? Why do we capitalize the first-person pronoun, I? The short answer is because we do. But that’s not a very satisfactory answer. Even though it feels natural to English speakers, capitalizing I is unusual. In fact, English is the only language that does. Germanic and Romantic languages typically have some conventions for capitalizing proper nouns, like Deutschland (in German) or Place de la Concorde (in French), but English is the only one that selfishly insists on capitalizing the personal pronoun.

BALL FAN REACHES NEOLOGISM PINNACLE "This is my month," boasted the note from Devin J. Biery, of Crofton. Such "guarantees" are common among Levey's ever-confident neologism entrants. But Devin made good on his promise. Explore Coub Facebook Twitter Tumblr Vocabulary Builder (500 will get you 5000) Double Your Vocabulary in a Month The 100 most common Latin and Greek roots figure in more than 5,000 English derivatives just beyond the average person’s vocabulary of 10,000 words. They are the ones in all CAPITAL letters. By memorizing these 100 CAPITALIZED Latin and Greek prefixes, suffixes and roots, you will have a short cut to sight read an additional 5,000 words. If you learn all of them (both the caps and non-caps roots), you can double this to 10,000 additional words.

Tragic images of children captured by photojournalists over time In most cultures, children are valued as precious gifts of life — treasured icons of hope. That stands in stark contrast to photographs circulated this week of a small, lifeless refugee child lying face-down on a Turkish beach with his bright red shirt, little blue cargo shorts and Velcro-strapped, sneakers. Almost immediately, the image became a symbol of the plight of refugees fleeing the Syrian crisis. When children are harmed, abused or neglected, the world gasps collectively — sometimes mobilizing to action. Merger - Merge keywords into new names - NameRobot A name that consists of two (or more) merged keywords is called a portmanteau word. It is one of the smartest methods to generate corporate and brand names. With the Merger, you can find these hidden gems in your naming projects' keywords with little effort. Similar to the Combinator, the Merger also combines words with each other to generate new names. The important difference being that, depending on your settings, the Merger tool will detect similarities in your keywords and delete particular components of the words, coming up with a range of portmanteau suggestions. Automatically generate portmanteau words

Science Vs. Politics – Australia’s Water Fluoridation Debate As countries around the world continue to ban their water fluoridation programs citing adverse health effects, Journalist Kate Johnston speaks to Independent Politician Mark Aldridge and Independent Film Maker Jaya Drolma, to find out why Australia is lagging behind. South Australian Independent Candidate and Civil Rights Advocate Mark Aldridge began questioning Australia’s water fluoridation program after encountering some information claiming that the benefits of fluoride on our teeth are largely topical – through application such as toothpaste – rather than systemic. “I couldn’t understand why we were bathing in it, drinking it, washing our cars in it when studies showed the benefits to be topical,” said Mark. “You know where it comes from, right?” he asked rhetorically.

Language of the birds In mythology, medieval literature and occultism, the language of the birds is postulated as a mystical, perfect divine language, green language, adamic language, enochian language, angelic language or a mythical or magical language used by birds to communicate with the initiated. History[edit] In Indo-European religion, the behavior of birds has long been used for the purposes of divination by augurs. According to a suggestion by Walter Burkert, these customs may have their roots in the Paleolithic when, during the Ice Age, early humans looked for carrion by observing scavenging birds.[1] There are also examples of contemporary bird-human communication and symbiosis. In North America, ravens have been known to lead wolves (and native hunters) to prey they otherwise would be unable to consume.[2][3] In Africa, the Greater Honeyguide is known to guide humans to beehives in the hope that the hive will be incapacitated and opened for them.

» Flower Power In late 1967 Bernie Boston was a reporter for the Washington Star a now-defunct newspaper. After he took this famous picture Star publishers didn’t see the value of the image and buried it the A section of their paper. Not deterred Bernie Boston sent the image out to various photo competitions which resulted in a number of awards, prizes and international recognition.

Origin of language The origin of language in the human species has been the topic of scholarly discussions for several centuries. In spite of this, there is no consensus on the ultimate origin or age of human language. One problem makes the topic difficult to study: the lack of direct evidence. Consequently, scholars wishing to study the origins of language must draw inferences from other kinds of evidence such as the fossil record, archaeological evidence, contemporary language diversity, studies of language acquisition, and comparisons between human language and systems of communication existing among other animals (particularly other primates). Many argue that the origins of language probably relate closely to the origins of modern human behavior, but there is little agreement about the implications and directionality of this connection. This shortage of empirical evidence has led many scholars to regard the entire topic as unsuitable for serious study.

ekit, phonecards, prepaid sim cards and international cell phones for international travelers When traveling, you need an international mobile phone that works on the GSM frequency bands used in the countries you are visiting. An international phone, often described as a global phone, travel mobile, travel phone, world phone or tri-band phone is simply a GSM phone that operates on three GSM frequency bands. Already have an international phone? You need to ensure your international phone is unlocked. If your phone is locked to your current mobile provider, it will not work with any SIM card service from another provider. Response to Quentin D. Atkinson - Languages Of The World We would like to thank Quentin D. Atkinson for taking the time to respond to our critique of the Science article by Bouckaert et al., of which he is one of the authors. While he appears to restate their team’s position rather than address specific criticisms that we had voiced, we feel that we should address those issues that Atkinson brings up in defense of their methodology. According to Atkinson, “the inferences based on linguistic palaeontology [i.e. the approach we advocate in our critique] have thus far failed to satisfy … three requirements”.