22 Motivational Pictures To Get You Off Your Ass 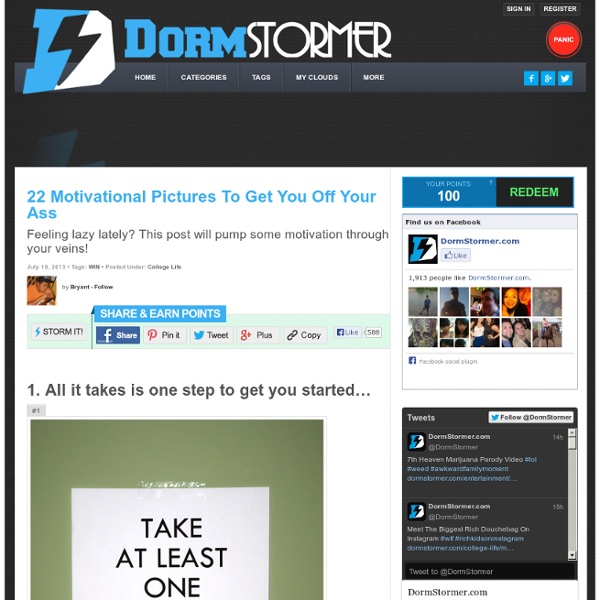 Related:  Things to Do • Psychology of Achievement

How to Rewire Your Brain to Be More Kind Toward Others Kindness is the state of caring about other people’s well-being and taking action to help make other people’s lives better and happier. It is a social glue that allows us to connect with others and build meaningful relationships with them When someone does something kind for us, we like them more and we want to cooperate with them more. When we do something kind for someone, we earn their trust and respect, and we feel better about ourselves for being a good person. Kindness is a reciprocal relationship. The Official Site for Denis Waitley » Psychology Of Winning Build self-esteem, motivation and self-discipline while developing the 10 qualities of a total winner. You will also discover the two vital qualities every successful person must develop. These same qualities have helped athletes shatter world-records. Winning isn’t just luck. You need a programmed mindset to become a champion. s

20 Ways to Feel ALIVE!!!!!! Unless you are the second coming of Jesus Christ (if you are, please comment!) it’s impossible not to feel a bit down sometimes. Here are 20 quick ways to revive yourself and get back that “on top of the world” feeling. Stick your body out of a sunroof while the car is driving I can tell you first-hand this one is a lot of fun. 9 Epiphanies That Shifted My Perspective Forever By David Over the years I’ve learned dozens of little tricks and insights for making life more fulfilling. They’ve added up to a significant improvement in the ease and quality of my day-to-day life. But the major breakthroughs have come from a handful of insights that completely rocked my world and redefined reality forever.

Think you’ve got a terrible memory? You don’t know the half of it In this far-ranging chat, psychologist Elizabeth Loftus spoke with MIT neuroscientists Steve Ramirez and Xu Liu about the future of memory manipulation. Last year, MIT neuroscientists Xu Liu and Steve Ramirez manipulated the memory of a mouse. In a fascinating and mildly troubling breakthrough caused by a laser and the protein channelrhodopsin, they “activated” fear memories in a mouse.

The Elements of Change ‘Without accepting the fact that everything changes, we cannot find perfect composure. But unfortunately, although it is true, it is difficult for us to accept it. Because we cannot accept the truth of transience, we suffer.’ ~Shunryu Suzuki Post written by Leo Babauta. 15 Ways to Be Irresistibly Attractive Be true to your values. Be honest. Do your best. Do things that bring you closer to your dreams. Take care of yourself, your family, and your friends.

Give and receive Money systemCharles EisensteinPhoto:Thulasi Kakkat The voice of Charles Eisentein may sound incongruous in our country that is in the throes of development. It is straining to be heard in a society charmed by consumerism. But his hard truths, delivered in his soft voice and gentle demeanour, had the audience sit up and listen at David Hall in Fort Kochi recently. This Moment By Leo Babauta We all suffer, every day: worry, procrastination, anxiety, feeling overwhelmed, irritated, angry, frustrated, wishing things were different, comparing ourselves to others, worried we’re missing out, wishing other people would be different, feeling offended, loneliness, fear of failure, not wanting to do something, wishing we had less fat or bigger boobs or bigger muscles, angry at being controlled, wanting to find the perfect someone, wishing our partner was more perfect, stressed about finances, not wanting to think about problems, not knowing how to fix things, uncertain about choices, rushing from one task to the next, not liking our jobs. And yet, these problems are self-created. They’re real, but our tricky minds have created them. The problems are in our heads, created by some ideal/fantasy/expectation of how we wished the world would be, or hope it will be but fear it won’t be. It exists in our heads.

77 Creative Ways to Lighten Up In Tough Times 51 Email Share We’re living in a time where nearly everyone is feeling overwhelmed with the changes and problems in the world. Some of us feel stuck, uninspired and fearful. Others have suffered major losses and feel hopeless and helpless. Some people find ways to thrive even in bad times.