The Law of Success - Napoleon Hill

Goal Setting. The Official Site for Denis Waitley » Psychology Of Winning. Build self-esteem, motivation and self-discipline while developing the 10 qualities of a total winner. 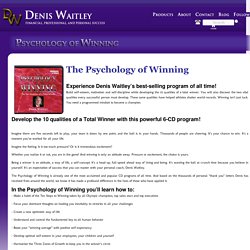 You will also discover the two vital qualities every successful person must develop. These same qualities have helped athletes shatter world-records. Winning isn’t just luck. You need a programmed mindset to become a champion. s Imagine there are five seconds left to play, your team is down by one point, and the ball is in your hands. Imagine the feeling. Whether you realize it or not, you are in the game! Being a winner is an attitude, a way of life, a self-concept. Brian Tracy on why you have to be future orientated most of the time. Brian Tracy says have a big idea and then just take the first step. Brian Tracy on the law of three when it comes to personal success.

Brian Tracy playing the one piece of advice game. Brian Tracy, Author of Eat That Frog! on the art of modelling success. 7 Ways to Grow the Action Habit. People at the top of every profession share one quality — they get things done. 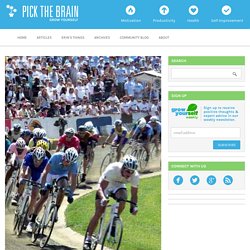 This ability supercedes intelligence, talent, and connections in determining the size of your salary and the speed of your advancement. Despite the simplicity of this concept there is a perpetual shortage of people who excel at getting results. The action habit — the habit of putting ideas into action now — is essential to getting things done. Here are 7 ways you can grow the action habit: 1. Don’t wait until conditions are perfect – If you’re waiting to start until conditions are perfect, you probably never will. 2. 5. 7. It takes courage to take action without instructions from the person in charge. Note: This list was inspired by The Magic of Thinking Big by David Schwartz. Don’t Forget To Follow Us On Twitter! Related Articles: How To Increase Self Discipline How To Motivate Yourself. Brian Tracy on why all you have to be is fractionally better to get miles ahead. Ed Wray on doing whatever it takes to achieve your goals, an example of raising finance. Edward Wray co-founded Betfair in 1999 and was Chief Executive until 2003, when he moved... 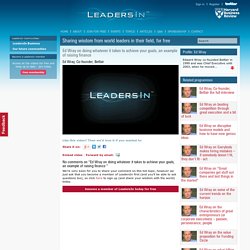 Edward Wray co-founded Betfair in 1999 and was Chief Executive until 2003, when he moved to Australia to set up the company’s joint venture there. He became Chairman of the Betfair Group in 2006. Betfair floated on the London Stock Exchange in October 2010, valued at £1.4bn. It is one of the world’s largest online sports betting operators, processing more than 7 million transactions a day. Edward stepped down from his role as Chairman of Betfair last year, and currently holds Directorships at Funding Circle (the peer to business lending site) and LMAX Limited (the world's leading exchange for FX), and is Chair of the Development Board of the charity YouthNet.

Prior to setting up Betfair, Edward spent 8 years at J.P. Ed was interviewed on LeadersIn in September 2013 in front of a London crowd. More information: www.fundingcircle.com. 22 Motivational Pictures To Get You Off Your Ass. Sahar Hashemi on courage and no hesitation. Have Sahar come to your offices!... 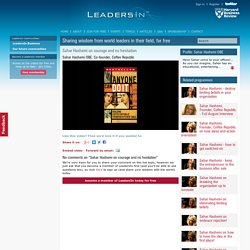 Giving up highly professional jobs, as a lawyer in London and an investment banker in New York, they staked everything on a dream – and made Coffee Republic one of the main players in the 'coffee revolution' that transformed a nation of tea drinkers into one obsessed with 'triple decaf half-caf lattes'. Her new book SWITCHED ON published in May 2010 about harnessing an entrepreneurial mindset for employees. John Griffin on having confidence in yourself and your ability - set high goals. Sir Stuart Rose on why fear can be a great motivator for success. Note: Sir Stuart was interviewed by LeadersIn on July 3rd, 2013 - click here to view the full interview. 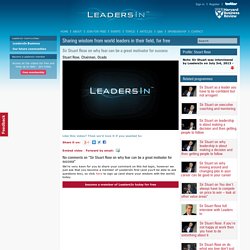 Biogrpahy: Sir Stuart Alan Ransom Rose is one of the UK’s most admired leaders in business, leadership and retail and is currently the Chairman of Ocado. Sir Stuart’s first job was an administrative assistant employed at the BBC. He then joined Marks & Spencer in 1972 as part of the management trainee program. It wasn’t until 1989 that he left and became the Chief Executive of The Burton Group. In 1997, he left and joined Argos as the Chief Executive. Robert Senior on the biggest risk is taking no risk at all… spending money on mediocrity and playing it ‘safe’

Robert Senior is CEO of Saatchi & Saatchi, Europe Middle East and Africa and the... 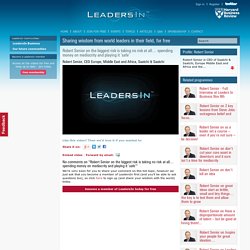 Brian Tracy on the law of incremental improvement. How We Elevate Each Other: Viktor Frankl on the Human Spirit and Why Idealism Is the Best Realism.