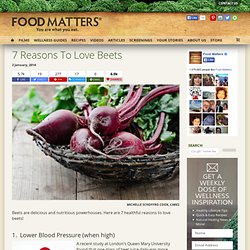 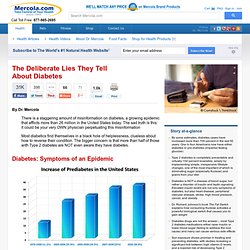 One in four Americans now have either diabetes or pre-diabetes (impaired fasting glucose) Type 2 diabetes is completely preventable and virtually 100 percent reversible, simply by implementing simple, inexpensive lifestyle changes, one of the most important of which is eliminating sugar (especially fructose) and grains from your diet Diabetes is NOT a disease of blood sugar, but rather a disorder of insulin and leptin signaling. Elevated insulin levels are not only symptoms of diabetes, but also heart disease, peripheral vascular disease, stroke, high blood pressure, cancer, and obesity Dr. One in Four People Have or Will Get Diabetes Get Your FREE REPORT and receive our Free Natural Health Newsletter Most Popular Diabetes Articles By Dr.

Diabetes: Symptoms of an Epidemic. Not All Calories Have the Same Effect. 'Fed Up' Theatrical Trailer. Good News: Artificial Sweeteners Are Gaining Bad Press. USANA, word!: You booze? You don’t lose! By Ravinder LillyUSANA ANZ Writer and Dietitian OK don’t get annoyed with me for this one. 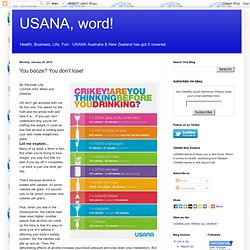 You asked for the truth and the whole truth and here it is... If you just can’t understand why you’re not shifting the weight, it could be due that alcohol is holding back your best made weight-loss plans. Let me explain... Exercise Found to Be EQUAL to Drugs for Heart Disease & Diabetes. By Dr. 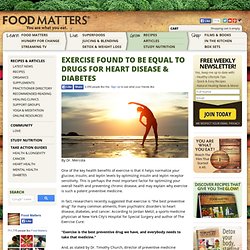 Mercola One of the key health benefits of exercise is that it helps normalize your glucose, insulin, and leptin levels by optimizing insulin and leptin receptor sensitivity. This is perhaps the most important factor for optimizing your overall health and preventing chronic disease, and may explain why exercise is such a potent preventive medicine. In fact, researchers recently suggested that exercise is "the best preventive drug" for many common ailments, from psychiatric disorders to heart disease, diabetes, and cancer.

According to Jordan Metzl, a sports-medicine physician at New York City's Hospital for Special Surgery and author of The Exercise Cure: Chocolate, wine and berries may protect against type 2 diabetes. 5 Foods to Avoid When Trying To Lose Weight. We spend a lot of time suggesting foods and herbal supplements that you can use to turbo charge your diet, but what about the things you should stay away from? 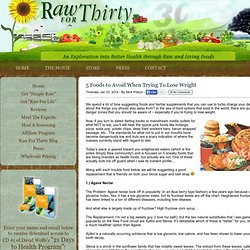 In the sea of food options that exist in the world, there are quite a few danger zones that you should be aware of – especially if you’re trying to lose weight. Now, if you turn to dated dieting books or mainstream media outlets for what NOT to eat, you’ll still hear the typical junk foods like hotdogs, pizza, soda pop, potato chips, deep fried snickers bars, bacon wrapped sausage, etc.. The standards for what not to put in our mouths have become dangerously low and truly are a scary indication of where the masses currently stand with regard to diet.

Today’s piece is geared toward you enlightened eaters (which is the entire Simply Raw community!) And is focused on 5 sneaky foods that are being branded as health foods, but actually are not. 1.) Certain probiotics could help women lose weight, study finds. Certain probiotics could help women lose weight and keep it off, according to a recent study published in the British Journal of Nutrition by a team of researchers headed by Université Laval Professor Angelo Tremblay. 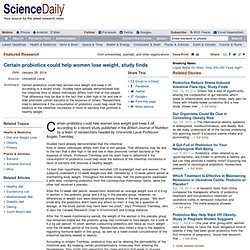 Studies have already demonstrated that the intestinal flora of obese individuals differs from that of thin people. That difference may be due to the fact that a diet high in fat and low in fiber promotes certain bacteria at the expense of others. My Advice to Weight Loss. Anti-Aging Miracle Supplements. Wrinkles? 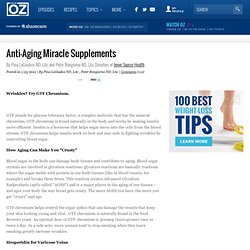 Try GTF Chromium. GTF stands for glucose tolerance factor, a complex molecule that has the mineral chromium. GTF chromium is found naturally in the body and works by making insulin more efficient. Insulin is a hormone that helps sugar move into the cells from the blood stream. Your Go-to Guide for Yoga & Wellness - MindBodyGreen.com. What is Cinnamon Good For? - Mercola.com. The Winsomeness of Cinnamon Botanical name: Cinnamomum cassiaThe sweet, woody scent of cinnamon has been known from almost the beginning of time as one of the warmest, most soothing fragrances on the planet. 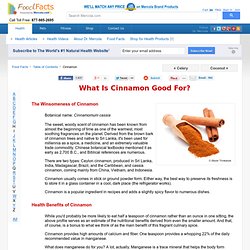 Derived from the brown bark of cinnamon trees and native to Sri Lanka, it's been used for millennia as a spice, a medicine, and an extremely valuable trade commodity. Chinese botanical textbooks mentioned it as early as 2,700 B.C., and Biblical references are numerous.There are two types: Ceylon cinnamon, produced in Sri Lanka, India, Madagascar, Brazil, and the Caribbean, and cassia cinnamon, coming mainly from China, Vietnam, and Indonesia.Cinnamon usually comes in stick or ground powder form.

Cardio Trek - Toronto Personal Trainer: 20 Ways to Tighten Skin after Weight Loss. The most popular blog post on this website thus far is one titled Weight Loss + Loose Skin, even though my later post Preventing Loose Skin During Weight Loss has more information on the topic. 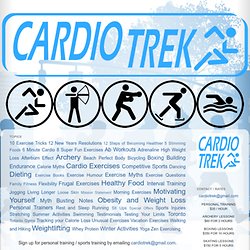 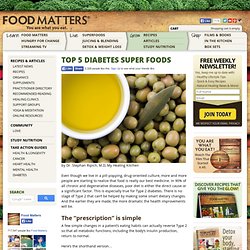 Stephan Ripich, M.D, My Healing Kitchen Even though we live in a pill-popping, drug-oriented culture, more and more people are starting to realize that food is really our best medicine. In 90% of all chronic and degenerative diseases, poor diet is either the direct cause or a significant factor. An aspirin before bed may reduce morning heart attacks. Here's some news that may be useful to millions of people who take a low-dose aspirin for their heart health: Taking the aspirin before bed may reduce the chance of having a heart attack or stroke in the morning, a new study suggests.

The American Heart Association recommends that people at high risk of having a heart attack should take a daily low dose of aspirin, if told to by their health care provider, and that heart attack survivors regularly take low-dose aspirin. Aspirin keeps platelets from forming clots, which can cause heart attack and strokes, says cardiologist Sidney Smith Jr., a professor at the University of North Carolina School of Medicine and a spokesman for the heart association. "Heart attacks are more likely to occur in the morning, so anything that would reduce platelet activity during the morning hours could be beneficial.

" Researchers in the Netherlands studied 290 patients with heart disease who were already taking aspirin. Children Who Sleep More Eat and Weigh Less. Nut Consumption Associated with Life Extension. Visit the Mercola Video Library This is a Flash-based video and may not be viewable on mobile devices. By Dr. Magnesium may help people with heart problems to live longer. Increased intakes of magnesium may help people with a high cardiovascular risk to live longer, according to a new study from Spain. A study of 7,216 men and women aged between 55 and 80 found that people with the highest average dietary intakes of magnesium had a 34% reduction in risk of mortality from cardiovascular issues and cancer, compared to people with the lowest average intakes, report researchers in the Journal of Nutrition. “There may be several explanations for these associations,” wrote the researchers.

“In particular, hypertension is a strong risk factor for CVD, and it is known that magnesium can lower blood pressure. Also, magnesium intake may inhibit platelet aggregation, modulate inflammation, and improve endothelial function. Exercise doesn't stop obesity, US report finds it's all about diet. Updated 4 hours 43 minutes ago Anyone pounding the pavement or sweating it out in the gym in the hope of shedding extra kilos may find they are wasting their time. A new report from the United States shows that obesity rates are continuing to rise despite more Americans becoming more physically active. Health experts say the key to reversing obesity trends has everything to do with food. The study by the University of Washington looked at three million Americans over the past decade and found increasing levels of exercise reduced death, heart disease and diabetes but did not put a dent in obesity rates.

Professor Bruce Neal, from the George Institute for Global Health at Sydney University, says the problem is the same in Australia. Snack cravings late at night, trigger unlocked in study. Global report: Obesity bigger health crisis than hunger. Nearly 500 researchers from 50 countries looked at 20 years of health data for the Global Burden of Disease report.

The Global Burden of Disease Report reveals a massive shift in health trendsWorldwide, obesity has increased 82% in the last two decadesDiseases like stroke and heart disease are leading causes of years spent sick or injured.

How the New Cholesterol Treatment Guidelines May Affect You.