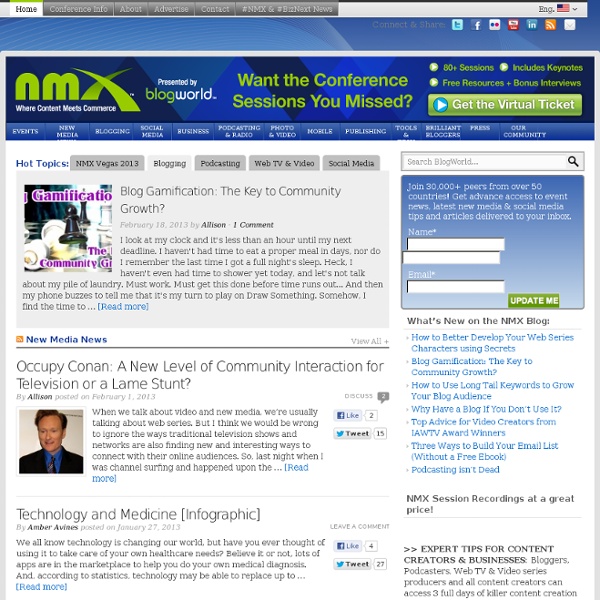 Basic Blogging Tips 5 Internet Marketing Trends for SMBs to Watch in 2012 In just the blink of an eye it will be 2012. And with that comes the opportunity for us to focus in on the hottest trends of the upcoming New Year, and maybe even those that eluded us in years prior. While you’re putting the finishing touches on your action plan for 2012, let’s dig into some of the hot Internet trends for SMBs to watch over the next 12 months. After all, you want to kick off the New Year on the right foot, don’t you? Of course you do. SoLoMo It was during November’s PubCon Vegas show that distinguished Google engineer Matt Cutts stood in front of a packed room and encouraged search marketers to focus on three areas over the next year: SocialLocalMobile While these areas were certainly hot in 2011, the data shows they’re only going to heat up from here. The year 2011 saw a 400 percent increase in the number of mobile searches, with 74 percent of people using their mobile phones to search while running errands. Using Online Reviews As Social Signals 1. 2. A Move Into the Cloud

Turkey&#039;s For Life... Andy Sernovitz's Damn, I Wish I'd Thought of That! Kuşadası Kuşadası (pronounced [ˈkuʃadasɯ]) is a resort town on Turkey's Aegean coast and the center of the seaside district of the same name in Aydın Province. Kuşadası lies at a distance of 95 km (59 mi) to the south from the region's largest metropolitan center of İzmir, and 71 km (44 mi) from the provincial seat of Aydın situated inland. Its primary industry is tourism. The district neighbours on the northeast to Germencik district, on the southeast to Söke district, on the west to the Aegean Sea, and on the north to Selçuk district. Geography[edit] The city stands on a bay in the Aegean with the peninsula of Guvercin Ada sticking out into the sea at one end, and the mountain of Pilav Dağı behind. It is 95 km (59 mi) south of İzmir, the region's largest metropolitan center. Demographics[edit] History[edit] Etymology[edit] Antiquity[edit] Rome and Christianity[edit] Later the port was a haven for pirates. The Turkish era[edit] Economy[edit] Industry[edit] Agents sell holiday flats and villas. In the town

A Guide to Google Analytics and Useful Tools - Smashing Magazine Advertisement Google Analytics is undoubtedly the most widely used web analytics application. Emerged from and based upon the analytics-package developed by Urchin Software Corporation (which was bought by Google in April 2005), the tool has become publicly available for free under the new flagship of Google Analytics. In May 2007 the application was heavily edited, developed and released; the design was simplified and more advanced featured were added. Over years Google Analytics managed to gain on popularity because of its simplicity and many advanced features for curious site owners and professional marketers. You probably use Google Analytics on a regular basis, for basic stats tracking the performance of your site. Did you know that Google Analytics can generate up to 85 different reports that will help you analyze all possible data about your website traffic. This post is not a be-all-and-end-all look at GA, but a rough guide to its many under-used features and reports.

Photo Essay: 25 of the Coolest UNESCO World Heritage Sites in Western Europe [Editor's note: I'm using the definition of "Western Europe" given by National Geographic (and Wikipedia). For more info on these and the rest of the 900 World Heritage Sites around the globe, visit the UNESCO website .] Cinque Terre, Italy The name refers to five small, cliffside towns strung along several miles of the Ligurian Coast, connected by a hiking trail and local train line. Jungfrau Region, Switzerland This area is the most glaciated of Europe's Alps and is named after the 4,150m (13,640ft) peak of Jungfrau. Bryggen, Norway Bryggen is the name of the old wharf in the coastal city of Bergen . Loire Valley, France This river valley was listed by UNESCO in 2000 for its historical and architectural importance to France and the rest of Western Europe. Surtsey, Iceland Surtsey is a volcanic island just south of the Icelandic mainland that didn't even exist until 1963, when an undersea eruption built up the square-mile landmass. Stonehenge, England Assisi, Italy Cordoba, Spain Venice, Italy

8 Small Business Social Media Tips From the Pros Are you looking for some social media tips to grow your small business? We asked eight small business pros for their hottest social media tips. Here’s their advice for you to . #1: Show Them the “Real You” Ed Gandia Use Facebook to show prospects, clients and customers the “real you.” I love to cook, so I’ve been known to post pictures of my grilled masterpieces. Oh, and I know I’m going to ruffle a lot of feathers by saying this, I get more engagement by updating five times per week than five times per day. Ed occasionally shares personal stories on Facebook. Ed Gandia , founding partner, International Freelancers Academy. #2: Pick One Thing and Do It Really Well Nichole Kelly Small businesses are faced with having to prioritize their resources toward the activities that deliver the most impact. Being on 5 social networks and giving all of them half-effort will not generate results. Nichole Kelly , founder of Full Frontal ROI. #3: Turn Your Facebook Page Into a Lead-Generating Machine Next, .