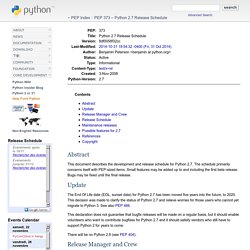 The schedule primarily concerns itself with PEP-sized items. Small features may be added up to and including the first beta release. Bugs may be fixed until the final release. The End Of Life date (EOL, sunset date) for Python 2.7 has been moved five years into the future, to 2020. What’s New in Python — Python 3.5.0a0 documentation. 2.8 Un-release Schedule. In all seriousness, there are important reasons why there won't be an official Python 2.8 release, and why you should plan to migrate instead to Python 3. 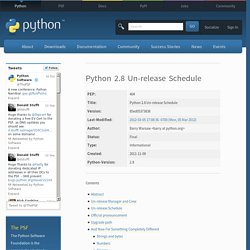 Python is (as of this writing) more than 20 years old, and Guido and the community have learned a lot in those intervening years. Guido's original concept for Python 3 was to make changes to the language primarily to remove the warts that had grown in the preceding versions. Python 3 was not to be a complete redesign, but instead an evolution of the language, and while maintaining full backward compatibility with Python 2 was explicitly off-the-table, neither were gratuitous changes in syntax or semantics acceptable. In most cases, Python 2 code can be translated fairly easily to Python 3, sometimes entirely mechanically by such tools as 2to3 [1] (there's also a non-trivial subset of the language that will run without modification on both 2.7 and 3.x).

The Gravity of Python 2. Recently there have been some discussions about Python 3 adoption. 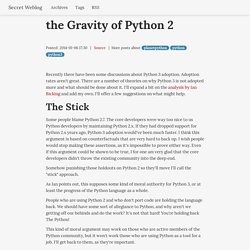 Adoption rates aren't great. There are a number of theories on why Python 3 is not adopted more and what should be done about it. I'll expand a bit on the analysis by Ian Bicking and add my own. I'll offer a few suggestions on what might help. The Stick. Python 3 is fine. There has been a slow chorus of poor anti-Python 3 articles lately. 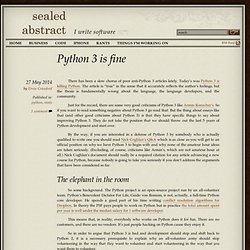 Today’s was Python 3 is killing Python. The article is “true” in the sense that it accurately reflects the author’s feelings, but the thesis is fundamentally wrong about the language, the language developers, and the community. Just for the record, there are some very good criticisms of Python 3 like Armin Ronacher’s. [Python-Dev] The end of 2.7. Why different flavors of Python ~ TechDarting - Propelling Technology. We always want different flavors in everything, don’t we? 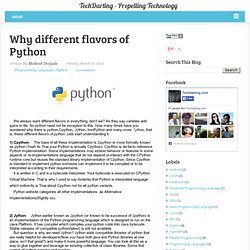 As they say varieties add spice to life. So python need not be exception to this. How many times have you wondered why there is python,Cpython, Jython, IronPython and many more . *ython, that is, these different flavors of python. 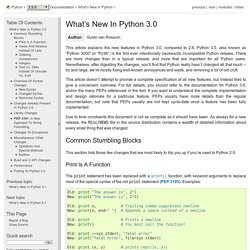 Python 3.0, also known as “Python 3000” or “Py3K”, is the first ever intentionally backwards incompatible Python release. There are more changes than in a typical release, and more that are important for all Python users. Nevertheless, after digesting the changes, you’ll find that Python really hasn’t changed all that much – by and large, we’re mostly fixing well-known annoyances and warts, and removing a lot of old cruft.

This article doesn’t attempt to provide a complete specification of all new features, but instead tries to give a convenient overview. For full details, you should refer to the documentation for Python 3.0, and/or the many PEPs referenced in the text. Due to time constraints this document is not as complete as it should have been. Common Stumbling Blocks. Porting to Python 3: An in-depth guide — Porting to Python 3 - The Book Site. Automatic conversion to Py2/3 — Python-Future documentation. Six 1.6.1. Package Index > six > 1.11.0 Not Logged In Status Nothing to report six 1.11.0 Downloads ↓ 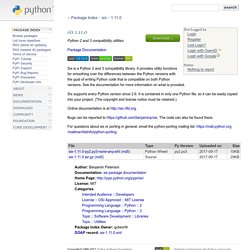 Self-publishing a book, Part 1: Why and How « Lennart Regebro: Python, Plone, Web. Nobody that reads this blog can have missed that I’ve written a book and self-published it. 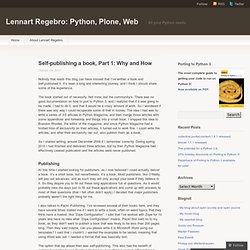 It’s been a long and interesting journey, and I think I should share some of the experience. The book started out of necessity. Not mine, but the community’s. Self-publishing a book, Part 2: My tool chain « Lennart Regebro: Python, Plone, Web. As a Python programmer, I’m of course biased towards tools that are written in Python or by Pythonistas or at least feel “Pythonic”. 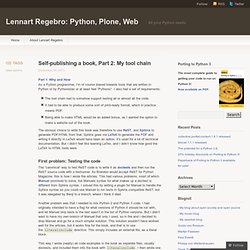 I also had a set of requirements: The tool chain had to somehow support testing all or almost all the code.It had to be able to produce some sort of print-ready format, which in practice means PDF.Being able to make HTML would be an added bonus, as I wanted the option to make a website out of the book. The obvious choice to write this book was therefore to use ReST, and Sphinx to generate PDF/HTML from that. Sphinx goes via LaTeX to generate the PDF and writing it directly in LaTeX would have been an option, it’s used for a lot of technical documentation. But I didn’t feel like learning LaTex, and I didn’t know how good the LaTeX to HTML tools were.

Picking an Interpreter — pythonguide 0.0.1 documentation. Getpython3.com. On Python 3 Yet? Dive Into Python Must Die : programming. Let's talk about Python 3.0. There’s an old joke, so old that I don’t even know for certain where it originated, that’s often used to explain why big corporations do things the way they do. 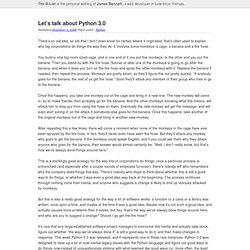 It involves some monkeys, a cage, a banana and a fire hose. You build a nice big room-sized cage, and in one end of it you put five monkeys. In the other end you put the banana. Then you stand by with the fire hose. Sooner or later one of the monkeys is going to go after the banana, and when it does you turn on the fire hose and spray the other monkeys with it. Once this happens, you take one monkey out of the cage and bring in a new one. After repeating this a few times, there will come a moment when none of the monkeys in the cage have ever been sprayed by the fire hose; in fact, they’ll never even have seen the hose. But this is also a really good analogy for the way a lot of software works: a function or a class or a library was written, once upon a time, and maybe at the time it was a good idea.

Death by a thousand cuts. Python 3: The Evolution of a Programming Language. Major revisions to any programming language are alarming, but Wesley J. Chun believes that Python 3.x brings real improvements to solve long-established problems. He points out some of the more interesting changes that obliterate design flaws and outdated functionality carried across from release to release, promising that you'll find Python 3 to be leaner, meaner, and more powerful than ever before. 2orPython3. Python_for_iOS_cdenter_2011.