5 Best Python frameworks for 2021 to enhance coding experience. Python has come up as a great platform for web applications in the past few years. 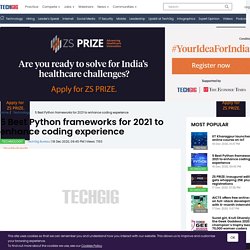 It has become a major choice for the developers and with several frameworks added to it, it is now becoming extremely popular in the market. Python is also increasing in popularity with major features like functionalities, uniqueness, and general interest that have come up as relatively essential aspects. But we all know that frameworks can help in the development cycle making developers work easily on the app. So, what are the major that developers can use to enhance the coding experience of the developers? #1 BottleIt is considered as a lightweight and simple micro web framework that is used to distribute the single file module.

Templates - The framework has pythonic and fast built-in templates that support cheetah, jinja2, and mako. Top 10 Python libraries of 2020 you should know about. Learn About Python Microservices by Building an App Using Django, Flask, and React. Using Python microservices allows you to break up your apps into smaller parts that communicate with each other. 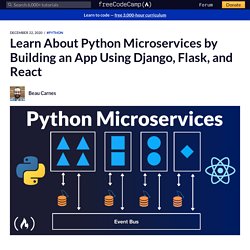 This can make it simpler to scale the application based on the traffic. Also, the separation of concerns makes it easier to work on just one part of the app at a time. Towardsdatascience. Pandas is a great tool for exploring and working with data. 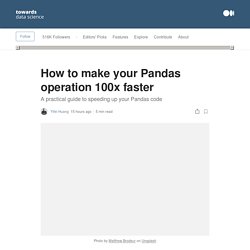 As such, it is deliberately optimized for versatility and ease of use, instead of performance. There are often many different ways to do the exact same operation, some of which are far more performant than others. This is not a problem if your data is relatively small or your transformation is relatively simple, but it can quickly becomes a bottleneck as the scale and complexity increase.

In this article, I will walk through a few different approaches to optimizing the performance ranging from vectorization to parallelization. Let’s start by making this issue more concrete with an example. A common operation when using Pandas is to create a new derived value based on one or more existing columns. The first approach [sum_square(row[0], row[1]) for _, row in df.iterrows()] uses list comprehension along with the method iterrows , and is the slowest by a long shot.

The second approach. Towardsdatascience. Pylance is the new Python language server from Microsoft. 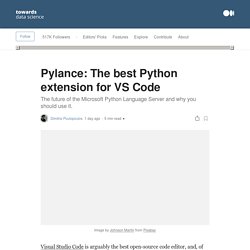 It offers fast, feature-rich language support for Python in Visual Studio Code, is dependent on the core Python extensions but brings a hell of a lot more to the table. Let’s see what the Microsoft VS Code Python team has been building for months. Python stub files Pylance leverages type stub files (.pyi files) and lazy type inferencing to provide an efficient development experience. My Python Development Environment in 2021.

Choosing which tools to use in your Python development environment might be the toughest part of Python programming. 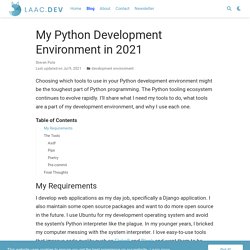 The Python tooling ecosystem continues to evolve rapidly. I’ll share what I need my tools to do, what tools are a part of my development environment, and why I use each one. My Requirements I develop web applications as my day job, specifically a Django application. I also maintain some open source packages and want to do more open source in the future. Installing Packages — Python Packaging User Guide.

This section covers the basics of how to install Python packages. 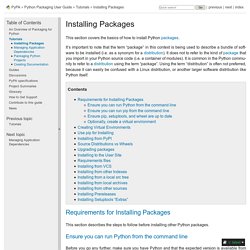 It’s important to note that the term “package” in this context is being used to describe a bundle of software to be installed (i.e. as a synonym for a distribution). It does not to refer to the kind of package that you import in your Python source code (i.e. a container of modules). It is common in the Python community to refer to a distribution using the term “package”. Using the term “distribution” is often not preferred, because it can easily be confused with a Linux distribution, or another larger software distribution like Python itself. Pip - How do I install Python packages on Windows?

Can't import my own modules in Python. Entry Points - setuptools 58.5.3 documentation. Packages may provide commands to be run at the console (console scripts), such as the pip command. 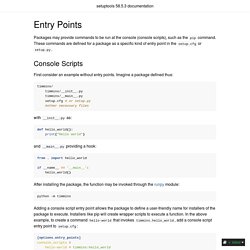 These commands are defined for a package as a specific kind of entry point in the setup.cfg or setup.py. Console Scripts First consider an example without entry points. Imagine a package defined thus: timmins/ timmins/__init__.py timmins/__main__.py setup.cfg # or setup.py #other necessary files with __init__.py as: def hello_world(): print("Hello world") and __main__.py providing a hook: Python - Difference between entry_points/console_scripts and scripts in setup.py? Towardsdatascience. It’s a kind of magic Python is the go-to language for most data science and machine learning projects. 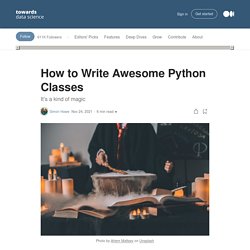 However, not every data scientist is necessarily a seasoned Python developer who knows and exploits all the nice features the language offers. This is of course understandable but also unfortunate at the same time. Why? Because knowing the specifics of a language allows you to write code that is less repetitive, more readable, and better maintainable. Onelivesleft/PrettyErrors: Prettify Python exception output to make it legible.

Betterprogramming. Let’s rewrite the code from above. 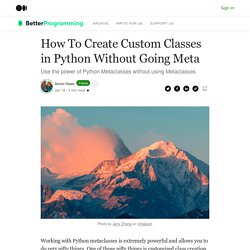 Remember, the goal is to somehow automatically register our subclasses. Without further ado, here is how we can do it. Vinta/awesome-python: A curated list of awesome Python frameworks, libraries, software and resources. Top 10 Python Tools For Time Series Analysis. Time series is a sequence of numerical data points in successive order and time series analysis is the technique of analysing the available data to predict the future outcome of an application. 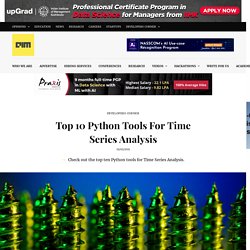 At present, time series analysis has been utilised in a number of applications, including stock market analysis, economic forecasting, pattern recognition, and sales forecasting. Here is a list of top ten Python tools, in no particular order, for Time Series Analysis. 1| Arrow About: Arrow is a Python library that offers a human-friendly approach to creating, manipulating, formatting and converting dates, times and timestamps. The library implements and updates the datetime type, plugging gaps in functionality and providing an intelligent module API that supports many common creation scenarios.

Pylance works with Jupyter notebooks, when those are in use in a project. Do You have Python Speedup Skills? Programming Guide This article sorts out some special techniques for speeding up Python code. I am gonna share some useful and time-saving tricks Python is slow and I know that. I bet you might encounter this counterargument many times about using Python, especially from people who come from theC ,C++ or Java world 😂 10 matplotlib Tricks to Master Data Visualization in Python. Gridstudio/README.md at master · ricklamers/gridstudio. The complete guide to Jupyter Notebooks for Data Science. Python can be run in many ways and common methods include running python scripts using a terminal or using the python shell. With data analysis/science making the news these days, we have ipython based jupyter notebooks that are being used by beginners and experts alike.

Ipython provides a REPL (Read-Evaluate-Print-Loop) shell for interactive Python development. It enables us to visualize the charts and plots using GUI toolkits and provides a kernel for jupyter. Project Jupyter succeeded Ipython Notebook and is based on Ipython as it makes use of its kernel to do all the computations and then serves the output to the front-end interface. Python - Preserve quotes and also add data with quotes in Ruamel. Python Static Analysis Tools - Blog. Development teams are under pressure. Releases must be delivered on time. Coding and quality standards must be met. And errors are not an option. That's why developer teams use static analysis. The main work of static code analysis tools is to analyze compiled application code or source code analysis so that you could easily detect vulnerabilities without executing a program.

Docformatter. Project description. 7 tips to make an effective Python Style Guide - Blog. Style guide. Some teams refer to it as their coding manual, coding standards or coding conventions, they tend to refer to the same thing. A style guide is a set of standards, principles, and rules set by a team that each developer should follow. Determining the most appropriate style guide for the team seems difficult. Usually, individual team members already have their own style of writing code (although this is more of sticking to certain principles, but still) and usually do not want to change it.

Software developers are conservatives and every change in the development process slows us down. Open Sourcing a Python Project the Right Way. Python for the Lab Learning (not) to Handle Exceptions. Professional Error Handling With Python. Wemake-python-styleguide · Actions · GitHub Marketplace. Py-sanity/README.md at master · rednafi/py-sanity. Awesome-python-data-science/README.md at master · krzjoa/awesome-python-data-science. <no title> — Bokeh 1.4.0 documentation. A tool for dimensionality reduction of machine learning datasets. Martin Heinz - Personal Website & Blog.

What is Metaflow - Metaflow. Metaflow is a human-friendly Python library that helps scientists and engineers build and manage real-life data science projects. Metaflow was originally developed at Netflix to boost productivity of data scientists who work on a wide variety of projects from classical statistics to state-of-the-art deep learning. Metaflow provides a unified API to the infrastructure stack that is required to execute data science projects, from prototype to production. Martin Heinz - Personal Website & Blog. Sourcery. TIL: PIP_REQUIRE_VIRTUALENV disables pip outside of a virtualenv : pythontips.

Usage — RISE 5.5.1. You can see in this youtube video a very short session on how to use RISE to create and run a slideshow. Let us emphasize the key points here. Creating a slideshow. Python Crash Course by ehmatthes. These are the resources for the first edition; the updated resources for the second edition are here. The 8 Best Free Python Cheat Sheets for Beginners and Experts in 2019. Write More Pythonic Code (Learning Path) Continuous Integration With Python. Pyreverse : UML Diagrams for Python (Logilab.org) Pyreverse analyses Python code and extracts UML class diagrams and package depenndencies. Since september 2008 it has been integrated with Pylint (0.15). Introduction Pyreverse builds a diagram representation of the source code with: class attributes, if possible with their typeclass methodsinheritance links between classesassociation links between classesrepresentation of Exceptions and Interfaces Generation of UML diagrams with Pyreverse The command pyreverse generates the diagrams in all formats that graphviz/dot knows, or in VCG :

How can I color Python logging output? Logging Cookbook — Python 3.4.0 documentation. This page contains a number of recipes related to logging, which have been found useful in the past. Top 40 Python Blogs, Websites And Newsletters To Follow in 2019. Plus.google. Plotly-chart-editor. Audreyr/cookiecutter-pypackage: Cookiecutter template for a Python package. Dash by Plotly. Beginner's Guide: creating clean Python development environments · Tjelvar Olsson. Python Pandas: Tricks & Features You May Not Know.