Rhino Python Tutorials – Plethora Project. Plethora-Project.com is an initiative to accelerate computational literacy in the frame of architecture and design. 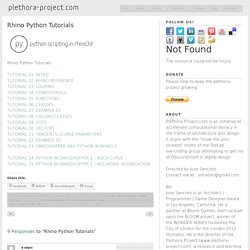 It aligns with the "show me your screens" motto of the TopLap live-coding group attempting to get rid of Obscurantism in digital design. Directed by Jose Sanchez Contact me at : jomasan@gmail.com Bio: Jose Sanchez is an Architect / Programmer / Game Designer based in Los Angeles, California. He is partner at Bloom Games, start-up built upon the BLOOM project, winner of the WONDER SERIES hosted by the City of London for the London 2012 Olympics. He is the director of the Plethora Project (www.plethora-project.com), a research and learning project investing in the future of on-line open-source knowledge.

GhPython – Outside the Canvas. As a follow up to my post about the new features in ghPython, I wanted to point out another feature now available; running Grasshopper components outside of the Grasshopper canvas. 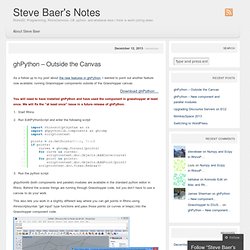 Download ghPython… You will need to have installed ghPython and have used the component in grasshopper at least once. We will fix the “at least once” issue in a future release of ghPython. Start RhinoRun EditPythonScript and enter the following script Run the python script ghpythonlib (both components and parallel) modules are available in the standard python editor in Rhino.

This also lets you work in a slightly different way where you can get points in Rhino using rhinoscriptsyntax “get input” type functions and pass those points (or curves or breps) into the Grasshopper component code. Like this: Like Loading... GhPython – New component and parallel modules. Just in time for Christmas… ghPython 0.6.0.3 was released this week and it has two new features that I’m really excited about. 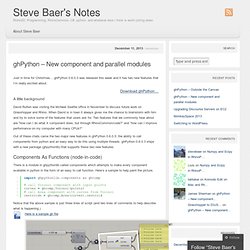 Download ghPython… A little background David Rutten was visiting the McNeel Seattle office in November to discuss future work on Grasshopper and Rhino. When David is in town it always gives me the chance to brainstorm with him and try to solve some of the features that users ask for. Two features that we commonly hear about are “how can I do what X component does, but through RhinoCommon/code?” Out of these chats came the two major new features in ghPython 0.6.0.3; the ability to call components from python and an easy way to do this using multiple threads. ghPython 0.6.0.3 ships with a new package (ghpythonlib) that supports these two new features.

Components As Functions (node-in-code) There is a module in ghpythonlib called components which attempts to make every component available in python in the form of an easy to call function. Here is a sample gh file. GhPython. For designers who want to use the same flexible language everywhere, GhPython is the Python interpreter component for Grasshopper that allows to execute dynamic scripts of any type. Unlike other scripting components, GhPython allows to use the rhinoscriptsyntax to start scripting without needing to be a programmer.

Once on-board and with some practice, you can also get the most of external Python and .Net modules and libraries. This component is open-source, and works in Rhino 5. Join this group to receive updates of new versions, and visit the Grasshopper forum for support. To install: In Grasshopper, choose File > Special Folders > Components folder. Downloads: License: