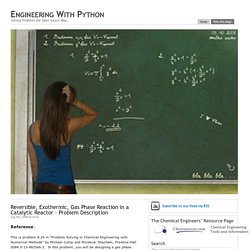 In this problem, you will be designing a gas phase catalytic reactor with a pressure drop to accomplish a reversible gas phase reaction. Concepts: Solve a system of ordinary differential equations with the appropriate initial conditionsUse Ipython with Scite editor to edit and save filesImport packages into workspaceDefine constantsDefine functions for the ODE solverUse the odeint solver with initial conditions and time span arrayPrint the solution. Software for integrating ODEs - Introduction to Reactor Design: 3K4. Background Numerically integrating ODE's is something you should have mastered in your pre-requisite 3E4 course. 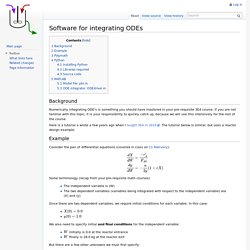 If you are not familiar with this topic, it is your responsibility to quickly catch up, because we will use this intensively for the rest of the course. Here is a tutorial a wrote a few years ago when I taught 3E4 in 2010. The tutorial below is similar, but uses a reactor design example. Example Consider the pair of differential equations (covered in class on 11 February): dXdW=−r′AFA0dydW=−α2y(1+εX) Some terminology (recap from your pre-requisite math courses) The independent variable is (W)The two dependent variables (variables being integrated with respect to the independent variable) are (X) and (y) Since there are two dependent variables, we require initial conditions for each variable. X(0)=0.0y(0)=1.0. Creating a Microkinetic Model — CatMAP 0.2.79 documentation.

All micro-kinetic models require a minimum of 2 files: the “setup file” and the “submission script”. 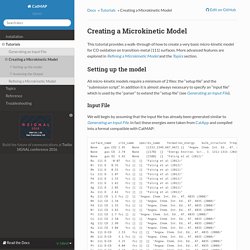 In addition it is almost always necessary to specify an “input file” which is used by the “parser” to extend the “setup file” (see Generating an Input File). Setup File¶ Next we will create the “setup file”. Lets make a text file named “CO_oxidation.mkm”. The suffix ”.mkm” is often used to designate a micro-kinetics module setup file, but it is not required. One of the most important aspects of the “setup file” is the “rxn_expressions” variable which defines the elementary steps in the model. 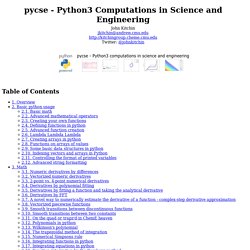 We use the method of direct minimization of the Gibbs free energy of the reacting mixture. The Gibbs free energy of a mixture is defined as G=∑jμjnj where μj is the chemical potential of species j, and it is temperature and pressure dependent, and nj is the number of moles of species j. We define the chemical potential as μj=G∘j+RTlnaj, where G∘j is the Gibbs energy in a standard state, and aj is the activity of species j if the pressure and temperature are not at standard state conditions. If a reaction is occurring, then the number of moles of each species are related to each other through the reaction extent ϵ and stoichiometric coefficients: nj=nj0+νjϵ. Combining these three equations and expanding the terms leads to: TKP4106 Process Modelling - IKP (NTNU) Introduction to Reactor Design: 3K4. Introduction to Reactor Design: 3K4. Cantera Outline - charlesreid1. Introduction: Cantera in Short Part I: Cantera Core Part II: Cantera for Python Part III: Cantera for Reaction Engineering Capabilities High level division of Cantera's capabilities Zero-D, One-D, phase objects, numerics Division of capabilities should roughly follow how Cantera source code is divided Apps - utilities for converting between Chemkin and Cantera file formats, parsing input files, comparing output files, etc. 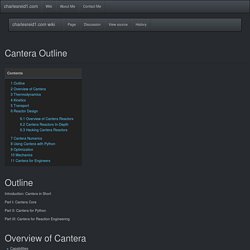 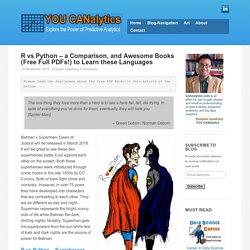 In spite of everything you’ve done for them, eventually, they will hate you [Spider-Man].– Green Goblin / Norman Osborn R vs Python- by Roopam Batman v Superman: Dawn of Justice will be released in March 2016. It will be great to see these two superheroes battle it out against each other on the screen. R vs Python – Superheroes Let us continue with the theme of contrasting superheroes with a common mission. You may find it unusual but I see a few similarities between R and Batman.

Let me try to explain the reasons for these distinctions between R and Python in the next segment. PythonBooks - Learn Python the easy way ! Automated Solution of Differential Equations by the Finite Element Method — FEniCS Project. Welcome — Cantera 2.2.0 documentation. How to Install Python XY for Windows - Scientific Python with Spyder IDE.