Concurrency. 10 Best Freelance Python Developers for Hire in October 2016. The Challenge As a rough order of magnitude, Giles Thomas (co-founder of PythonAnywhere) estimates that there are between 1.8 and 4.3 million Python developers in the world. 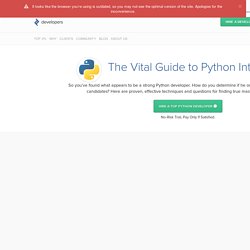 So how hard can it be to find a Python developer? Well, not very hard at all if the goal is just to find someone who can legitimately list Python on their resume. But if the goal is to find a Python guru who has truly mastered the nuances and power of the language, then the challenge is most certainly a formidable one. First and foremost, a highly-effective recruiting process is needed, as described in our post In Search of the Elite Few – Finding and Hiring the Best Developers in the Industry. Python Guru or Snake in the Grass? So you’ve found what appears to be a strong Python developer. It is important to bear in mind, though, that these sample questions are intended merely as a guide. Python in the Weeds… Q: Why use function decorators? Q: What are lambda expressions, list comprehensions and generator expressions?

About optional arguments. Python Object Oriented. Python has been an object-oriented language since it existed. 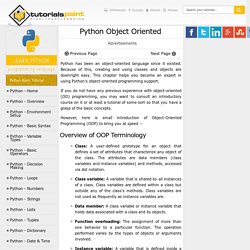 Because of this, creating and using classes and objects are downright easy. This chapter helps you become an expert in using Python's object-oriented programming support. If you do not have any previous experience with object-oriented (OO) programming, you may want to consult an introductory course on it or at least a tutorial of some sort so that you have a grasp of the basic concepts. However, here is small introduction of Object-Oriented Programming (OOP) to bring you at speed − Overview of OOP Terminology Class: A user-defined prototype for an object that defines a set of attributes that characterize any object of the class. Creating Classes The class statement creates a new class definition. Class ClassName: 'Optional class documentation string' class_suite The class has a documentation string, which can be accessed via ClassName. Example. Classes and Objects - Learn Python - Free Interactive Python Tutorial.

Objects are an encapsulation of variables and functions into a single entity. 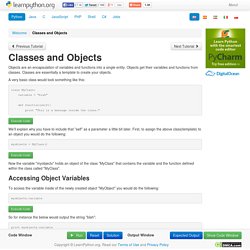 Objects get their variables and functions from classes. Classes are essentially a template to create your objects. An Introduction to Python Lists. You can use the list type to implement simple data structures, such as stacks and queues. stack = [] stack.append(object) object = stack.pop() queue = [] queue.append(object) object = queue.pop(0) The list type isn’t optimized for this, so this works best when the structures are small (typically a few hundred items or smaller). 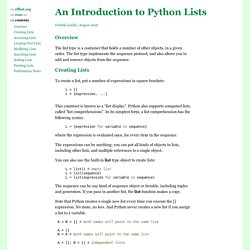 For larger structures, you may need a specialized data structure, such as collections.deque. Another data structure for which a list works well in practice, as long as the structure is reasonably small, is an LRU (least-recently-used) container. Lru.remove(item) lru.append(item) Modules and Packages - Learn Python - Free Interactive Python Tutorial. Modules in Python are simply Python files with the .py extension, which implement a set of functions. 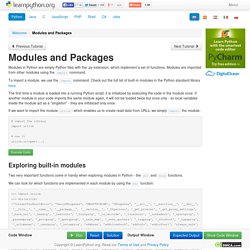 Modules are imported from other modules using the import command. To import a module, we use the import command. Check out the full list of built-in modules in the Python standard library here. The first time a module is loaded into a running Python script, it is initialized by executing the code in the module once. If another module in your code imports the same module again, it will not be loaded twice but once only - so local variables inside the module act as a "singleton" - they are initialized only once.

If we want to import the module urllib, which enables us to create read data from URLs, we simply import the module: # import the library import urllib # use it urllib.urlopen(...) Multiple Function Arguments - Learn Python - Free Interactive Python Tutorial. Every function in Python receives a predefined number of arguments, if declared normally, like this: def myfunction(first, second, third): # do something with the 3 variables ... 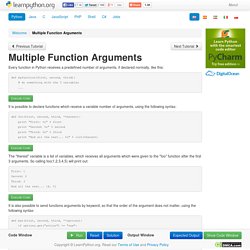 Execute Code It is possible to declare functions which receive a variable number of arguments, using the following syntax: def foo(first, second, third, *therest): print "First: %s" % first print "Second: %s" % second print "Third: %s" % third print "And all the rest... %s" % list(therest) The "therest" variable is a list of variables, which receives all arguments which were given to the "foo" function after the first 3 arguments. First: 1 Second: 2 Third: 3 And all the rest... [4, 5] It is also possible to send functions arguments by keyword, so that the order of the argument does not matter, using the following syntax: Code Introspection - Learn Python - Free Interactive Python Tutorial.

Django. Infrastructure: Why did Quora choose Python for its development?