Why you should use the Django admin: 9 tips. CTO with a CEO flavour. This writing is inspired by a comment on Reddit concerning my recent post: “The problem is that everyone I speak to seems to think the opposite - that the admin is super-limited, inflexible and hard to customize.”— andybak on Reddit I’m about to break this prejudice right now. 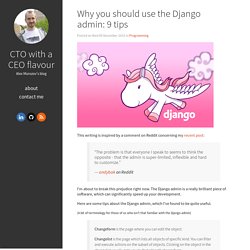 The Django admin is a really brilliant piece of software, which can significantly speed up your development. Here are some tips about the Django admin, which I’ve found to be quite useful. (A bit of terminology for those of us who isn’t that familiar with the Django admin) Changeform is the page where you can edit the object.Changelist is the page which lists all objects of specific kind. To make the tips more practical, let’s try to solve some almost-real-life problems. Tip #1: The Django admin is not just for Django sites While the admin interface plays very well with the rest of Django framework, it’s very easy to use it with, say, the legacy database or the site which has an awkward admin interface.

Examples with code · olgabot/prettyplotlib Wiki. The basic idea for all of these plots is that you should be able to do ppl. 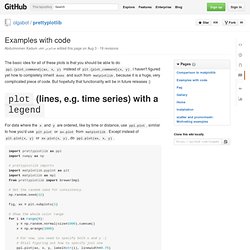 {plot_command}(ax, x, y) instead of plt. {plot_command}(x, y). I haven't figured yet how to completely inherit Axes and such from matplotlib, because it is a huge, very complicated piece of code. But hopefully that functionality will be in future releases :) plot (lines, e.g. time series) with a legend For data where the x and y are ordered, like by time or distance, use ppl.plot, similar to how you'd use plt.plot or ax.plot from matplotlib. Legend parameters If you want to move the legend to somewhere else, use the arguments you'd normally use for legend(), e.g. loc='lower right', ncol=4: ppl.legend(ax, loc='lower left', ncol=4) The full code is here: fill_between (area between two lines) This is for when you want to show the area between two lines, like you have timeseries of two stocks and want to show their difference. fill_betweenx (area between two lines, fill between x values) scatter (points) bar hist boxplot. 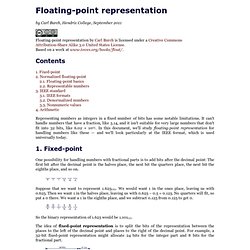 Contents Representing numbers as integers in a fixed number of bits has some notable limitations. It can't handle numbers that have a fraction, like 3.14, and it isn't suitable for very large numbers that don't fit into 32 bits, like 6.02 × 1023. In this document, we'll study floating-point representation for handling numbers like these — and we'll look particularly at the IEEE format, which is used universally today. 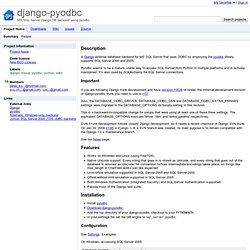 Pyodbc seems to be a mature, viable way to access SQL Server from Python in multiple platforms and is actively maintained. It's also used by SQLAlchemy for SQL Server connections. Important If you are following Django trunk development and have revision 10026 or newer, the minimal development revision of django-pyodbc trunk you need to use is r157. Also, the DATABASE_ODBC_DRIVER, DATABASE_ODBC_DSN and DATABASE_ODBC_EXTRA_PARAMS settings were migrated to the DATABASE_OPTIONS dictionary setting in this revision. This is a backward-incompatible change for setups that were using at least one of these three settings. SVN trunk development follows closely Django development, so it needs a recent checkout of Django SVN trunk.

What Is The Best Way To Start A Dojo Project? Last week, we announced Free Dojo Support to help Dojo developers with their ongoing development efforts and improve the way they were using Dojo. 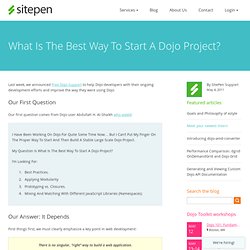 Our First Question Our first question comes from Dojo user Abdullah H. Al-Shaikh who asked: I Have Been Working On Dojo For Quite Some Time Now… But I Can’t Put My Finger On The Proper Way To Start And Then Build A Stable Large Scale Dojo Project. My Question Is What Is The Best Way To Start A Dojo Project? Our Answer: It Depends First things first, we must clearly emphasize a key point in web development: There is no singular, “right” way to build a web application. Thankfully, the Dojo Toolkit, gives you many options to optimize for the specific requirements of your application. Base Assumptions First, to limit the complexity of our answer, we’ll assume that you are: Building an application from JavaScript and Dojo source without any particular server-side framework in mind. Boilerplate File Structure Why this structure? Application Controller Summary.