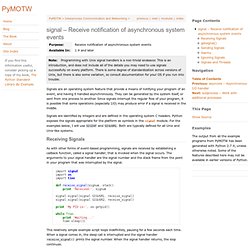 This is an introduction, and does not include all of the details you may need to use signals successfully on every platform. There is some degree of standardization across versions of Unix, but there is also some variation, so consult documentation for your OS if you run into trouble. Signals are an operating system feature that provide a means of notifying your program of an event, and having it handled asynchronously.

They can be generated by the system itself, or sent from one process to another. Signals are identified by integers and are defined in the operating system C headers. Receiving Signals As with other forms of event-based programming, signals are received by establishing a callback function, called a signal handler, that is invoked when the signal occurs. This relatively simple example script loops indefinitely, pausing for a few seconds each time. Chianti.ucsd.edu/svn/csplugins/trunk/ucsd/kono/JythonEnginePlugin/jython2.5.1/Lib/test/test_signal.py. # based on test_signal.py from # # due to the fact that this version is modular enough to readily run # on Jython. # # most tests are disabled due to lack of 2.6 support in our signal # module (WakeupSignalTests, SiginterruptTest, ItimerTest) and no # os.pipe/os.fork (InterProcessSignalTests). 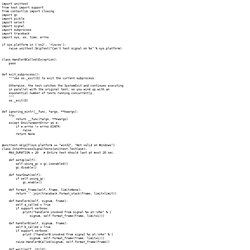 _exit(0) to exit the current subprocess. Otherwise, the test catches the SystemExit and continues executing in parallel with the original test, so you wind up with an exponential number of tests running concurrently. """ os. _exit(0) def ignoring_eintr(__func, *args, **kwargs): try: return __func(*args, **kwargs) except EnvironmentError as e: if e.errno ! 17.4. signal — Set handlers for asynchronous events — Python v2.7.2 documentation. This module provides mechanisms to use signal handlers in Python. 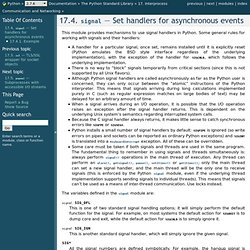 Some general rules for working with signals and their handlers: A handler for a particular signal, once set, remains installed until it is explicitly reset (Python emulates the BSD style interface regardless of the underlying implementation), with the exception of the handler for SIGCHLD, which follows the underlying implementation.There is no way to “block” signals temporarily from critical sections (since this is not supported by all Unix flavors).Although Python signal handlers are called asynchronously as far as the Python user is concerned, they can only occur between the “atomic” instructions of the Python interpreter.

The variables defined in the signal module are: signal.SIG_DFL This is one of two standard signal handling options; it will simply perform the default function for the signal. Linux - Python - Trap all signals. Control - How do I capture SIGINT in Python. How To Catch “Kill” Events with Python « daniel’s devel blog. How To Catch “Kill” Events with Python Currently I’m working on a small MRCPv2 client written in Python, which is part of a bigger project at my laboratory. 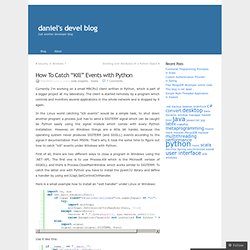 The client is started remotely by a program which controls and monitors several applications in the whole network and is stopped by it again. In the Linux world catching “kill events” would be a simple task, to shut down another program a process just has to send a SIGTERM signal which can be caught be Python easily using the signal module which comes with every Python installation. However, on Windows things are a little bit harder, because the operating system never produces SIGTERM (and SIGILL) events according to the signal.h documentation from MSDN.

That’s why it took me some time to figure out how to catch “kill” events under Windows with Python. First of all, there are two different ways to close a program in Windows using the .NET API. Here is a small example how to install an “exit handler” under Linux or Windows: Like this: Unix/Linux Signals 101. Background Unix/Linux allows a user to have control over a program that they are running by sending what are called signals. 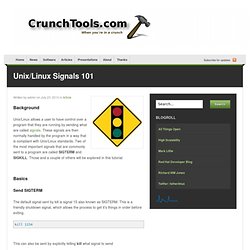 These signals are then normally handled by the program in a way that is compliant with Unix/Linux standards. Two of the most important signals that are commonly sent to a program are called SIGTERM and SIGKILL. Those and a couple of others will be explored in this tutorial. Basics Send SIGTERM.