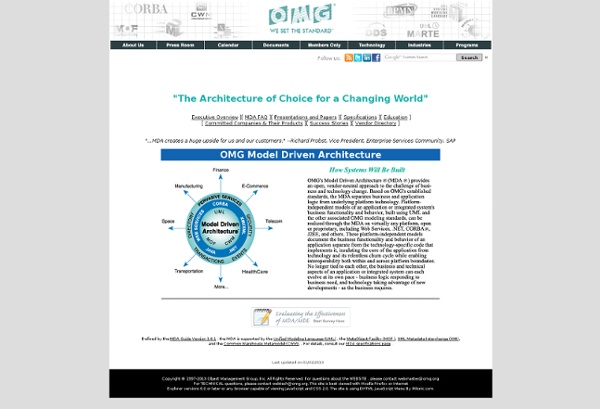 Software Product Lines A software product line (SPL) is a set of software-intensive systems that share a common, managed set of features satisfying the specific needs of a particular market segment or mission and that are developed from a common set of core assets in a prescribed way. Software product lines are emerging as a viable and important development paradigm allowing companies to realize order-of-magnitude improvements in time to market, cost, productivity, quality, and other business drivers. Software product line engineering can also enable rapid market entry and flexible response, and provide a capability for mass customization. We are working to make software product line practice a dependable low-risk high-payoff practice that combines the necessary business and technical approaches to achieve success. Benefits Product lines can help organizations overcome the problems caused by resource shortages. Learn More

Go Flow » Blog Archive » BPMN, XPDL and BPEL in your spare time I got the chance to participate on a panel session at the BPM Think Tank in Arlington VA on May 24 2006 on the subject of BPM Standards. Richard Mark Soley was on one end representing OMG and the BPMN standard. John Evdemon from Microsoft was on the other end representing BPEL for which he is the TC Co-Chairman. I was between them representing XPDL from WfMC. BPEL is an “execution language”. XPDL is a process design format. The goal of BPEL is to provide a definition of web service orchestration, the underlying sequence of interactions, the flow of data from point to point. The goal of XPDL is to store and exchange the process diagram. The different usage is best represented the diagram below. The XPDL file can provide this design interchange because it offers one for one representation of the original BPMN process diagram; it can be written, and re-read to recover the original diagram. The importance of process design interchange will increase as the market matures. Like this:

Service - Oriented Architecture See also the client-server model, a progenitor concept A Service-Oriented Architecture (SOA) is a design pattern in which software/application components provide services to other software/application components via a protocol, typically over a network and in a loosely-coupled way. The principles of service-orientation are independent of any vendor, product or technology.[1] A service is a self-contained unit of functionality, such as retrieving an online bank statement.[2] By that definition, a service is a discretely invokable operation. However, in the Web Services Definition Language (WSDL), a service is an interface definition that may list several discrete services/operations. Services can be combined to provide the complete functionality of a large software application.[3] A SOA makes it easier for software components on computers connected over a network to cooperate. Definitions[edit] The Open Group's definition is: Overview[edit] SOA framework[edit] Design concept[edit]

Open SOA Collaboration If you feel you have reached this page in error, please contact the web site owner: It may be possible to restore access to this site by following these instructions for clearing your dns cache. If you are the web site owner, it is possible you have reached this page because: The IP address has changed.There has been a server misconfiguration.The site may have been moved to a different server. If you are the owner of this website and were not expecting to see this page, please contact your hosting provider. Note: Although this site is running cPanel, WebHost Manager, and Apache software it almost certainly has no other connection to cPanel Inc. or the Apache Group. About cPanel: cPanel is a leading provider of software for the webhosting industry. About Apache HTTP Server: The Apache HTTP Server is an open source web server which powers many of the world's web sites.

Unified Modeling Language The Unified Modeling Language (UML) is a general-purpose modeling language in the field of software engineering, which is designed to provide a standard way to visualize the design of a system.[1] It was created and developed by Grady Booch, Ivar Jacobson and James Rumbaugh at Rational Software during 1994–95 with further development led by them through 1996.[1] In 1997 it was adopted as a standard by the Object Management Group (OMG), and has been managed by this organization ever since. In 2000 the Unified Modeling Language was also accepted by the International Organization for Standardization (ISO) as an approved ISO standard. Since then it has been periodically revised to cover the latest revision of UML.[2] Overview[edit] A collage of UML diagrams The Unified Modeling Language (UML) offers a way to visualize a system's architectural blueprints in a diagram (see image), including elements such as:[3] History[edit] History of object-oriented methods and notation Before UML 1.x[edit] [edit]

Estado Actual del Modelado Framework-specific modeling language A framework-specific modeling language [1] (FSML) is a kind of domain-specific modeling language which is designed for an object-oriented application framework. FSMLs define framework-provided abstractions as FSML concepts and decompose the abstractions into features. The features represent implementation steps or choices. A FSML concept can be configured by selecting features and providing values for features. Applications[edit] FSMLs are used in model-driven development for creating models or specifications of software to be built. the creation of the models from the framework completion code (that is, automated reverse engineering)the creation of the framework completion code from the models (that is, automated forward engineering)code verification through constraint checking on the modelautomated round-trip engineering Examples[edit] Eclipse Workbench Part Interaction FSML [2] [3] References[edit] Jump up ^ M. See also[edit]