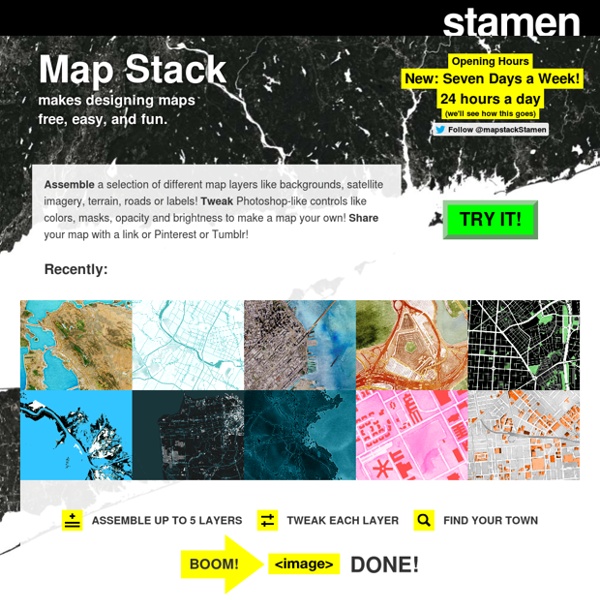 Apache Zeppelin 0.7.0-SNAPSHOT Documentation: Data Ingestion Data Discovery Data Analytics Data Visualization & Collaboration Multiple Language Backend Apache Zeppelin interpreter concept allows any language/data-processing-backend to be plugged into Zeppelin. Currently Apache Zeppelin supports many interpreters such as Apache Spark, Python, JDBC, Markdown and Shell. Adding new language-backend is really simple. Learn how to create your own interpreter. Map Stack: Maps for all Jun 12, 2013 Map Stack: Maps for all Good-looking maps used to be the domain of experts. That’s been changing quite a bit in the last few years, and it’s easier than ever now for developers to access mapping data (the recent State of the Map US conference was a great place to hear about this).

e-flux journal 56th Venice Biennale – SUPERCOMMUNITY – Uncommoning Nature On June 5, 2009, at dawn, a violent confrontation took place between police forces and a large group of Peruvian citizens declaring themselves as belonging to the Awajun-Wampis indigenous groups. The police’s objective was to break up a blockade at a major highway near the town of Bagua in the Amazonian lowlands of northern Peru. The Awajun-Wampis had taken control of the highway at a place called La Curva del Diablo (Devil’s Curve) as part of a general strike that started on April 9 that same year, organized by several Amazonian indigenous groups. They were protesting a series of legislative decrees conceding their territory to oil exploration without abiding by the Indigenous and Tribal Peoples (ILO) Convention No. 169, which requires that governments consult inhabitants of territories that corporations may approach for exploration and exploitation. Accordingly, the concession was illegal, as the protestors declared. The War is Not Silent Anymore (But it Continues Undeclared)