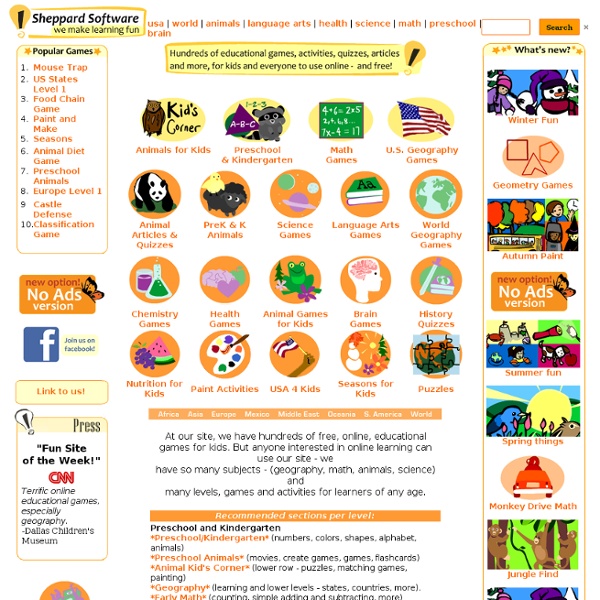 Internet Archive: Digital Library of Free Books, Movies, Music & Wayback Machine Pounce! | PBS KIDS! Come play again later! Come play again tomorrow! First Grade Place Value Websites Three days a week, I do my version of math workshop. In one center, students use the computer to reinforce the standards covered. I create a word/html document and put it in a shared folder so students can just click on the links (actually I embed the link in a picture from the website). I have included a brief description so that you don't have to research these yourself. First Grade – My Favorite Hundred’s Chart Interactive Websites This is great to do with an interactive whiteboard (or have students do it on their own). This is an interactive hundred’s chart which allows students to paint different numbers. Find the target number on a hundred’s chart. Find 10 more than the target number on a hundred’s chart. My Favorite First Grade Place Value Websites You are given the tens and ones, and you need to find the numeral that matches. Shark Numbers - More shark fun. Shark Pool – Ten’s and One’s The same as shark numbers but with cups instead of place value blocks.

The Leading Site For Conspiracy Theories, UFO, Paranormal, Political Madness, and other "Alternative Topics" Phonics games Phonics games will help your child to practise sounding out words, which will help them to read. Initially, children will learn basic letter sounds, such as "c-a-t" for "cat". Later they will move on to sounds such as "th", "sh" and "ch", then "oo", "oa" and so on. Once they recognise a few basic letter sounds, they will be able to work out what a written word says for themselves, a skill which they will be very proud to show off! Follow the links below to the free phonics games. Click for free printable phonics resources to support the DfES Letters and Sounds scheme. Another skill which phonics games can help with is being able to recognise the sounds that a spoken word is made up of, which will help them when it comes to writing and spelling.

brainpopjr Make BrainPOP Jr. part of your day in the classroom, at home, or on the go! To access BrainPOP Jr.’s Movie of the Week on an Android device, iPad, iPhone, or iPod touch, download our FREE Movie of the Week app. You’ll get a different animated, educational movie – plus its related quizzes and bonus features – delivered right to your mobile device every Monday. Ideal for kids in Kindergarten through grade 3, the BrainPOP Jr. Since its 2006 launch, BrainPOP Jr. has been a safe and trusted online environment where early learners can further explore what they’re studying at school, or delve into any other age-appropriate subject they’re curious about. Also check out the award-winning BrainPOP Featured Movie app for kids in grades 3-8 – downloaded millions of times – which offers animated movies and quizzes for older students. What is BrainPOP Jr.?

ESL Kids -Teaching English To Children HOME: house and furniture Roof, chimney, wall, window, door. Bedroom, bathroom, living-room, kitchen. You can each them words like: bed, chair, table, curtains, basin, towel…etc. First teach them basic words and then expand the vocabulary by making associations with another word class. Remember: you shouldn't teach one unit per hour but always repeat previously taught vocabulary and you don't have to introduce all the words in one class at the same time. In the kitchen: FOOD: FRUIT AND VEGETABLES Teach these words slowly (it's a big word class). Pick the words you would like to teach and combine them with the four seasons. WEATHER and CELESTIAL BODIES, FOUR SEASONS Sun, moon, cloud, rain, thunder, snow, snowflakes, stars. Repeat the words night/day and parts of the day: morning, afternoon, evening. Autumn, winter, spring, summer. If the children don't know any of the words you teach them, teach them in their mother tongue first, then in English. Tell a simple riddle and ask for feedback :

Joke of the Day! | Joke of the Day ESL Kids phonics,Sounds Word Building, Reading through Phonics Main/ Courses / Worksheets / Teaching Tips/ Songs/ Phonics / Flashcards/ Shop / Contact/Partners Phonics Materials for All Games In this section you will find a generous collection of the best phonics resources. There are flashcards, Video slides, Worksheets and more for teachers. Phonics Printable PDF Worksheets A to Z A To Z A to D - E to H - I to L - M to P - Q to T - U to W - X to Z Phonics>>> Site Search : Find stuff across our sites Store : ESL Ebooks, Kids Course materials, PPT & more