How to Give a Killer Presentation 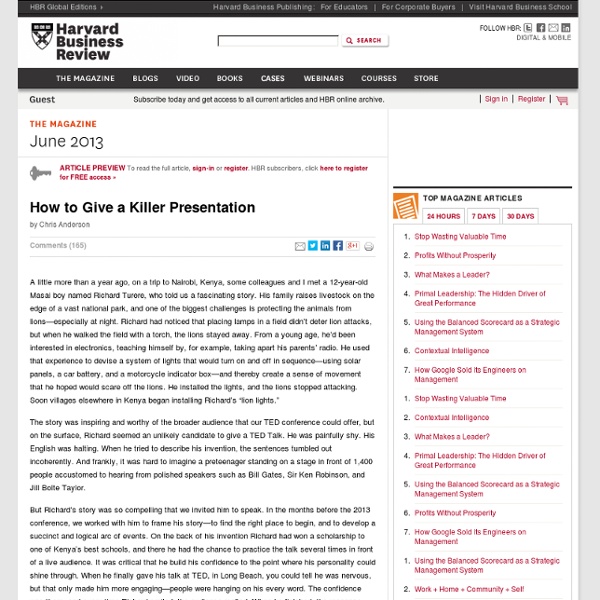 A little more than a year ago, on a trip to Nairobi, Kenya, some colleagues and I met a 12-year-old Masai boy named Richard Turere, who told us a fascinating story. His family raises livestock on the edge of a vast national park, and one of the biggest challenges is protecting the animals from lions—especially at night. Richard had noticed that placing lamps in a field didn’t deter lion attacks, but when he walked the field with a torch, the lions stayed away. From a young age, he’d been interested in electronics, teaching himself by, for example, taking apart his parents’ radio. He used that experience to devise a system of lights that would turn on and off in sequence—using solar panels, a car battery, and a motorcycle indicator box—and thereby create a sense of movement that he hoped would scare off the lions. He installed the lights, and the lions stopped attacking. But Richard’s story was so compelling that we invited him to speak. Frame Your Story

How Twitter Is Reshaping The Future Of Storytelling Every five days, a billion tiny stories are generated by people around the world. Those messages aren’t just being lost in the ether, like the imaginary output of monkeys randomly attempting to produce the works of Shakespeare. Instead, the tweets are being archived by the Library of Congress as part of the organization’s mission to tell the story of America. The archive now includes 170 billion posts and counting. The patterns of human life will be stored in this Twitter archive like a form of digital sediment.

Five hundred new fairytales discovered in Germany A whole new world of magic animals, brave young princes and evil witches has come to light with the discovery of 500 new fairytales, which were locked away in an archive in Regensburg, Germany for over 150 years. The tales are part of a collection of myths, legends and fairytales, gathered by the local historian Franz Xaver von Schönwerth (1810–1886) in the Bavarian region of Oberpfalz at about the same time as the Grimm brothers were collecting the fairytales that have since charmed adults and children around the world. Last year, the Oberpfalz cultural curator Erika Eichenseer published a selection of fairytales from Von Schönwerth's collection, calling the book Prinz Roßzwifl. This is local dialect for "scarab beetle". The scarab, also known as the "dung beetle", buries its most valuable possession, its eggs, in dung, which it then rolls into a ball using its back legs. Eichenseer says the fairytales are not for children alone.

Chris Anderson shares his tips for giving a killer presentation Watching curator Chris Anderson in speaker rehearsals before a TED conference feels like witnessing the zen of a longtime coach who knows his sport both inside out and backwards. Whenever a trial run of a talk feels just a little askew, a few simple sentences are whispered. Magically, the next time the talk is given publicly, it is mesmerizing — and without a hint that it was ever anything but. In a new essay in The Harvard Business Review’s June issue, Anderson shares his fine-tuned advice for delivering a powerful talk. A few choice tidbits: “We all know that humans are wired to listen to stories, and metaphors abound for the narrative structures that work best to engage people. Orange Is the New Black on Road Less Traveled: Show gets Robert Frost poem "The Road Not Taken" right. Photo composite by Slate. Photos courtesy Wikimedia Commons and Netflix In “Blood Donut,” the seventh episode of Orange Is the New Black, Taystee Jefferson (Danielle Brooks) makes a passing reference to “the road less traveled,” prompting a brief, agitated lecture from her fellow inmate, Piper Chapman (Taylor Schilling). “You know,” Piper says, “that doesn’t mean what everyone thinks it means.”

CCSS Instructional Practice Guides Common Core practice made clear These tools provide specific guidance for what the CCSS for ELA/Literacy and Mathematics look like in daily planning and practice. They are designed as developmental tools for teachers and those who support teachers. Use the Daily Instructional Practice Guides for: TED Talk: A story of survival, resilience, and hope Hyeonseo Lee's 2013 TED Talk describing her escape from North Korea is one of the most compelling and inspiring talks I've seen on the TED stage in quite a while. I'm not saying it's technically the best TED talk ever, but it's certainly one of my personal favorites. I showed the talk a few times here to my students in Japan and they were amazed and inspired by this young woman's experience and her remarkable story. There are storytelling lessons to be learned by examining these kind of true-life personal narratives. In the book Story Craft: The Complete Guide to Writing Narrative Nonfiction, author Jack Hart reminds us of what story is: "at its most basic, a story begins with a character who wants something, struggles to overcome barriers that stand in the way of achieving it, and moves through a series of actions—the actual story structure—to overcome them."

Using the Asset Inventory: A Process Learning Circle Approach This set of resources applies the Process Learning Circle (PrLCs) strategy to the task of interpreting and using the results from the NCLE Asset Inventory. By connecting PrLCs (process) to the data resulting from the Asset Inventory (content), we hope to support learning communities in developing the qualities of effective collaboration, as described in the Framework for Capacity Building (e.g., deprivatizing practice, shared agreements, collaborative culture, inquiry stance, using evidence, and systemic support). This strategy can be used with many sizes of groups (i.e., grade level/department team, staff). For large groups, we suggest dividing into groups of 5-6 people. PrLCs are a way to build and sustain powerful learning communities.

What makes a great screenplay? Once upon a time, in such and such a place, something happened." In basic terms that's about it – the very best definition of a story. What an archetypal story does is introduce you to a central character – the protagonist – and invite you to identify with them; effectively they become your avatar in the drama. So you have a central character, you empathise with them, and something then happens to them, and that something is the genesis of the story. Jack discovers a beanstalk; Bond learns Blofeld plans to take over the world.