Mindboggling Consequences In Wake Of Battery Price Drops. Cars Published on December 27th, 2013 | by Guest Contributor Originally published by ABB-Conversationsby Hans Streng We are now in a transition period where battery prices are dropping by 20-30% each year. 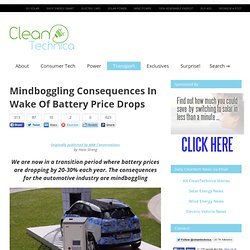 In China there is an additional market driver: megacity air pollution. With the arrival of long-range affordable electric vehicles the challenges to the charging infrastructure increase proportionally. Over the last 5 years the e-mobility industry has converged around three global fast charge standards. The automotive industry has to switch, and switch quickly.

Gartner: Top 10 future strategic IT predictions. Gartner opened its Symposium/ITxpo extravaganza with a bit of good news: Worldwide IT spending is forecast to reach $3.8 trillion in 2014, a 3.6% increase from 2013. 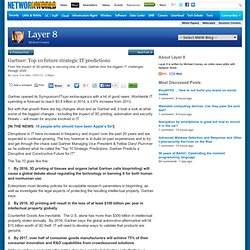 But with that growth there are big changes afoot and as Gartner will, it took a look at what some of the biggest changes - including the impact of 3D printing, automation and security threats -- will mean for anyone involved in IT. [IN THE NEWS: 10 people who should have been Apple's Siri] Disruptions in IT have increased in frequency and impact over the past 20 years and are expected to continue growing. The key however is to build on past experiences and to try and get through the chaos said Gartner Managing Vice President & Fellow Daryl Plummer as he outlined what he called the "Top 10 Strategic Predictions: Gartner Predicts a Disruptive and Constructive Future for IT"

Star Wars Lightsabres Made Reality By Science. Star Wars fans will feel the force is definitely with them after a scientific breakthrough which has turned the lightsabre from science fiction to fact. 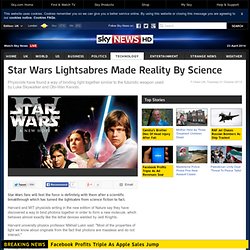 Harvard and MIT physicists writing in the new edition of Nature say they have discovered a way to bind photons together in order to form a new molecule, which behaves almost exactly like the lethal devices wielded by Jedi Knights. Harvard university physics professor Mikhail Lukin said: "Most of the properties of light we know about originate from the fact that photons are massless and do not interact. " This is illustrated when two laser beams are shone at each other, and they pass through one another. Professor Lukin said: "What we have done is create a special type of medium in which photons interact with each other so strongly that they act as though they have mass, and bind together to form molecules. "It's not an in-apt analogy to compare this to lightsabres. Disruptions: How Driverless Cars Could Reshape Cities. Jeff Swensen for The New York TimesA self-driving car at Carnegie Mellon. 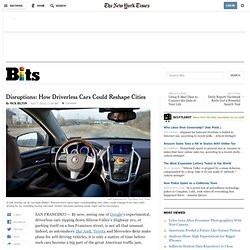 Researchers have been contemplating how cities could change if our cars start driving for us, including having narrower streets because parking spots might not be necessary. SAN FRANCISCO — By now, seeing one of Google’s experimental, driverless cars zipping down Silicon Valley’s Highway 101, or parking itself on a San Francisco street, is not all that unusual. Indeed, as automakers like Audi, Toyota and Mercedes-Benz make plans for self-driving vehicles, it is only a matter of time before such cars become a big part of the great American traffic jam. While driverless cars might still seem like science fiction outside the Valley, the people working and thinking about these technologies are starting to ask what these autos could mean for the city of the future. As Digital Mavens, UK Consumers Display Key Patterns in Online Behavior. The UK has a unique digital profile, according to a new eMarketer report, “UK Key Digital Trends: Ecommerce, Video and Mobile Thrive, but Brands Must Work for Loyalty and Trust,” with certain key patterns having the biggest effect on the digital landscape, including online shopping, video viewing, and smartphone and tablet uptake. 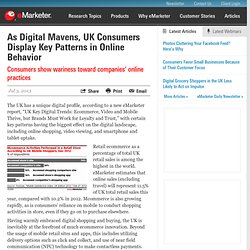 Retail ecommerce as a percentage of total UK retail sales is among the highest in the world. eMarketer estimates that online sales (excluding travel) will represent 11.5% of UK total retail sales this year, compared with 10.2% in 2012. Mcommerce is also growing rapidly, as is consumers’ reliance on mobile to conduct shopping activities in store, even if they go on to purchase elsewhere. Having warmly embraced digital shopping and buying, the UK is inevitably at the forefront of much ecommerce innovation.

In terms of video consumption, even as television remains the most popular media experience in the UK, digital video is seeing significant interest. Metamaterials breakthrough could lead to the first wide-spectrum optical invisibility cloak. Dominos tested delivering pizza by drone. Augmented Reality Glasses (ARGs) – The Reality of the Future. Devices That Listen To Your Life All The Time. Microsoft just revealed its brand-new Xbox One games console and Kinect sensor. The two devices are jam-packed with impressive next-generation technology that will keep gamers and TV watchers enthralled. But here's one thing you may have overlooked about the Xbox One: It's a perfect, permanent, living room spy device.

We're talking, of course, about the One's impressive voice-recognition tech: This is game-changing technology in action. Brain Computer Interfaces Inch Closer to Mainstream. Intel Tries to Find a Foothold Beyond PCs. Tomorrow's Material World is Being Built at the Molecular Foundry. The containment area is supposed to be clean, clean, clean. 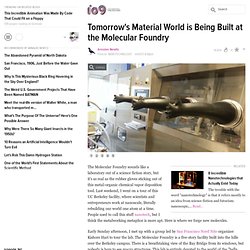 As far as it's concerned, the nasty stuff is on the outside. Ellen nailed it. Tiny Chiplets Are a New Level of Micro Manufacturing. For One Week, My Incredible Pebble Smartwatch Was All It Promised To Be. The coming Golden Age of neurotech. All seems to indicate that the next decade, the 20s, will be the magic decade of the brain, with amazing science but also amazing applications. 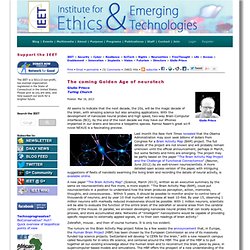 With the development of nanoscale neural probes and high speed, two-way Brain-Computer interfaces (BCI), by the end of the next decade we may have our iPhones implanted in our brains and become a telepathic species. Ramez Naam’s great sci-fi novel NEXUS is a fascinating preview. Last month the New York Times revealed that the Obama Administration may soon seek billions of dollars from Congress for a Brain Activity Map (BAM) project. The full details of the project are not known and will probably remain unknown until the official announcement, perhaps in March, but some factlets and hints are emerging.

TED SpaceTop presenter is redefining hands-on computing (w/ video) (Phys.org)—Jinha Lee, an MIT graduate student, this week showed his SpaceTop, a desktop environment where you can "reach inside" a computer screen and manipulate objects as if they were real. 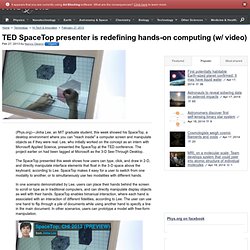 Lee, who initially worked on the concept as an intern with Microsoft Applied Science, presented the SpaceTop at the TED conference. Toilets: Capital Markets and Catalytic Philanthropy.