Why neuroscience is ending the Prozac era. The big money has moved from developing psychiatric drugs to manipulating our brain networks. 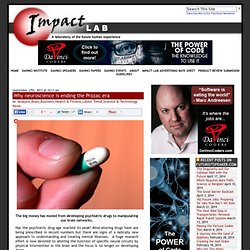 Has the psychiatric drug age reached its peak? Mind-altering drugs have are being prescribed in record numbers but there are signs of a radically new approach to understanding and treating mental illnesses. A huge research effort is now devoted to altering the function of specific neural circuits by physical intervention in the brain and the focus is no longer on developing drugs. The starkest indication that drugs are increasingly being thought of as yesterday’s cutting-edge comes from the little mentioned fact that almost all the major drug companies have closed or curtailed their drug discovery programs for mental and neurological disorders. Quality control opens path to synthetic biology's Ikea - life - 27 March 2013. THE next industrial revolution could be biological. 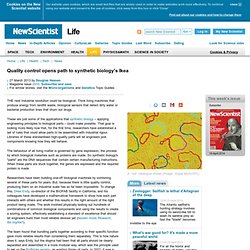 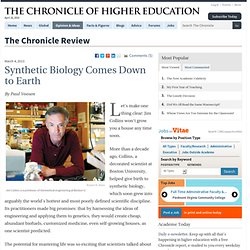 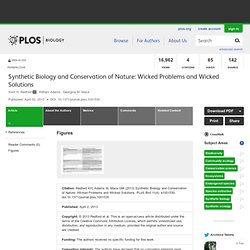 PLoS Biol 11(4): e1001530. doi:10.1371/journal.pbio.1001530 Published: April 2, 2013 Copyright: © 2013 Redford et al. This is an open-access article distributed under the terms of the Creative Commons Attribution License, which permits unrestricted use, distribution, and reproduction in any medium, provided the original author and source are credited. Funding: The authors received no specific funding for this work. Competing interests: The authors have declared that no competing interests exist. Supreme Court Decision Opens the Doors to A Boom in Synthetic Biology. Today’s Supreme Court ruling on the patenting of human genes was a boost to the field of synthetic biology. 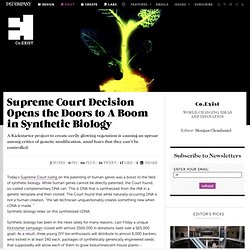 While human genes cannot be directly patented, the Court found, so-called complementary DNA can. This is DNA that is synthesized from the rNA in a genetic template and then cloned. Trends in synthetic biology 2011. Synthetic Biology: Mapping the Scientific Landscape. Results. New high-tech laser method allows DNA to be inserted 'gently' into living cells.

(Phys.org) —The applications of gene therapy and genetic engineering are broad: everything from pet fish that glow red to increased crop yields worldwide to cures for many of the diseases that plague humankind. 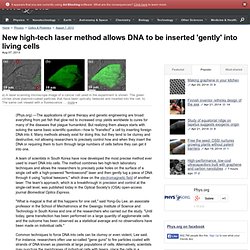 But realizing them always starts with solving the same basic scientific question—how to "transfect" a cell by inserting foreign DNA into it. Many methods already exist for doing this, but they tend to be clumsy and destructive, not allowing researchers to precisely control how and when they insert the DNA or requiring them to burn through large numbers of cells before they can get it into one. A team of scientists in South Korea have now developed the most precise method ever used to insert DNA into cells. Scientists 'print' 3D bionic ear. The Growing Global Challenge to Monsanto's Monopolistic Greed. (Photo: Monsanto via The New York Times) The common problem we face is the power of concentrated wealth and monopolistic corporate interests. This has created a crony capitalist economy that uses government to further enrich the wealthy at the expense of the people, often threatening our basic necessities for life.A clear example of this is found in the behavior of the chemical and seed corporation, Monsanto.Monsanto threatens the world's food supply; this is a major challenge of our era.

This struggle is central to the global ecosystem, economy and energy crises. Monsanto also pushes poisonous chemicals into the environment and promotes agricultural practices that exacerbate climate change. Challenges of Synthetic Biology and Metabolic Engineering in New Biofuel Production Technologies - Crop Biotech Update (3/11/2011. (open access journal article during time of access) The role of metabolic engineering and synthetic biology as enabling technologies for the production of alcohol biofuels (i.e. ethanol and butanol) was reviewed by Ramon Gonzalez of Rice University (United States) and colleagues. 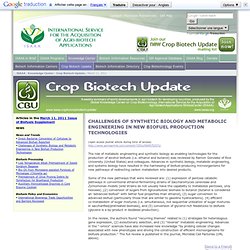 New synthetic biology circuits that combine memory and logic. MIT engineers have created genetic circuits in bacterial cells that not only perform logic functions, but also remember the results, which are encoded in the cell’s DNA and passed on for dozens of generations. 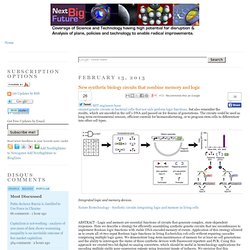 The circuits could be used as long-term environmental sensors, efficient controls for biomanufacturing, or to program stem cells to differentiate into other cell types. Integrated logic and memory devices. Nature Biotechnology - Synthetic circuits integrating logic and memory in living cells ABSTRACT - Logic and memory are essential functions of circuits that generate complex, state-dependent responses. Here we describe a strategy for efficiently assembling synthetic genetic circuits that use recombinases to implement Boolean logic functions with stable DNA-encoded memory of events. Metamaterials breakthrough could lead to the first wide-spectrum optical invisibility cloak. To make a Harry Potter-style invisibility cloak requires the use of materials that have what's known as a negative refractive index over all optical wavelengths, from red to violet. 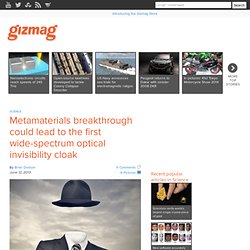 However, the artificially-structured optical materials from which cloaks are made thus far have been restricted to a very narrow range of optical wavelengths, limiting their ability to cloak over a range of colors. That obstacle to progress looks to be at an end, as a group of optical engineers at Stanford has succeeded in designing a broadband metamaterial that exhibits a negative refractive index over nearly the entire rainbow. View all The first invisibility cloaks, made at Duke University, worked by bending light around an object to be cloaked, as illustrated below. However, it is not quite this simple.