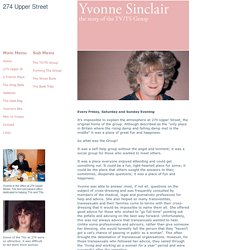 Although described as the "only place in Britain where the rising damp and falling damp met in the middle" it was a place of great fun and happiness. So what was the Group? It was a self-help group without the angst and torment; it was a social group for those who wanted to meet others. It was a place everyone enjoyed attending and could get something out. It could be a fun, light-hearted place for some; it could be the place that others sought the answers to their, sometimes, desperate questions; it was a place of fun and happiness. Yvonne was able to answer most, if not all, questions on the subject of cross-dressing and was frequently consulted by members of the medical, legal and journalistic professions for help and advice. Gay-Themed Picture Books for Children: Jenny lives with Eric and Martin. University of Oxford Podcasts - Audio and Video Lectures. Is the future black for the pink press? Six o'clock on a Friday evening in The Yard, one of Soho's popular gay bars. 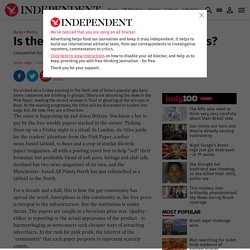 Some customers are drinking in groups. Others are skimming the news in the Pink Paper, reading the record reviews in Thud or glancing at the pin-ups in Boyz. As the evening progresses, the titles will be discarded or tucked into bags, but, for now, they are a diversion. The same is happening up and down Britain. You know a bar is gay by the free weekly papers stacked in the corner. For a decade and a half, this is how the gay community has spread the word. Gay History - A Trail Exploring LGBT Heritage In London Collections. Gay history is no longer off limits for museums, as demonstrated at the Museum of London. 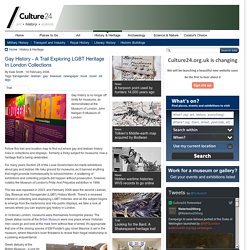 John Neligan © Museum of London Follow this trail and location map to find out where gay and lesbian history lives in collections and displays - formerly a tricky subject for museums, now a heritage that is being celebrated. For many years Section 28 of the Local Government Act made exhibitions about gay and lesbian life risky ground for museums, as it banned anything that might promote homosexuality to schoolchildren. GMFA. Providing peer support to people living with HIV for over 25 years.

Providing peer support to people living with HIV for over 25 years. LGBT History Project: Burke Proposes Abolition of the Pillory, 1780. On Monday 10th April 1780, two men were convicted of sodomy and sentenced to stand for an hour in a pillory ‘near the obelisk’ in London. 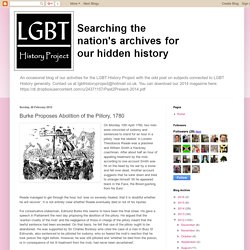 Theodosius Reade was a plasterer and William Smith a Hackney coachman. After about half an hour of appalling treatment by the mob, according to one account Smith was hit on the head by his ear by a stone and fell over dead. Another account suggests that he sank down and tried to strangle himself ‘till he appeared black in the Face, the Blood gushing from his Ears’. Reade managed to get through the hour, but ‘was so severely treated, that it is doubtful whether he will recover’. It is not entirely clear whether Reade eventually died or not of his injuries. For conservative statesman, Edmund Burke this seems to have been the final straw. Over the next few days, editorials in the Morning Post and Daily Advertiser were aimed against Burke, referring to him as ‘the advocate of the guilty’ and ‘displaying his talents to obtain mercy for sodomites!’ 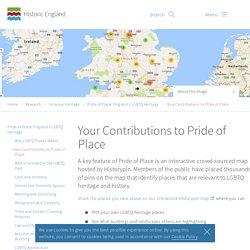 Members of the public have placed thousands of pins on the map that identify places that are relevant to LGBTQ heritage and history. Share the places you care about on our interactive Historypin map where you can: Plot your own LGBTQ heritage places See what buildings and landscapes others are highlighting Pinpoint well-known places that have a secret LGBTQ history Add images and videos. BARE The Musical Tickets, Multiple Dates. 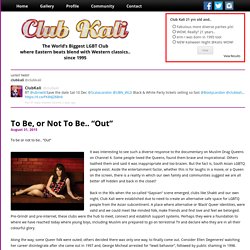 “Out” It was interesting to see such a diverse response to the documentary on Muslim Drag Queens on Channel 4. Some people loved the Queens, found them brave and inspirational. Others loathed them and said it was inappropriate and too brazen. But the fact is, South Asian LGBTQ people exist. Memorabilia and photography from seminal London club night Trade. Many club nights claim to be influential, but iconic after-hours party Trade really was, as its final party – at north London club Egg – will demonstrate. 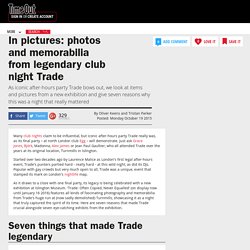 Just ask Grace Jones, Björk, Madonna, Alex James or Jean Paul Gaultier, who all attended Trade over the years at its original location, Turnmills in Islington. The 1990s: When Islington rivalled Soho for clubbing - Heritage. 14:40 15 September 2016 James Morris Trade at Turnmills nightclub in the early 1990s. 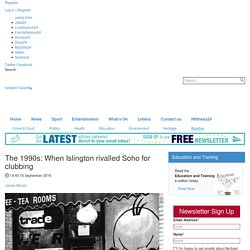 Picture: Anne Marie Garbutt “Islington is becoming ‘like Soho’ because so many clubs and bars are being allowed to stay open all night, according to a local councillor.” This excerpt, from the Islington Gazette in October 1996, is hard to believe 20 years on. 1984. Pub: The Fallen Angel, Islington, London. - Gay in the 80s. The Fallen Angel as it is today – part of an apartment complex! 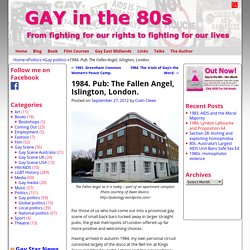 Photo courtesy of Ewan Munro. For those of us who had come out into a provincial gay scene of small back bars tucked away in larger straight pubs, the great metropolis of London offered up far more positive and welcoming choices. Having arrived in autumn 1984, my own personal circuit consisted largely of the disco at the Bell Inn at Kings Cross (on Monday night, I think) and the extraordinary Fallen Angel on Graham Street in Islington. The Angel wasn’t the most centrally located pub – it required a bit of a hike from the bus stop or Tube station on City Road. 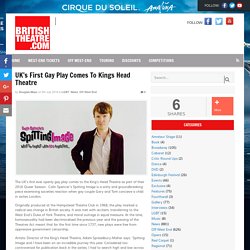 Colin Spencer’s Spitting Image is a witty and groundbreaking piece examining societies reaction when gay couple Gary and Tom concieve a child in sixties London. Originally produced at the Hampstead Theatre Club in 1968, the play marked a radical sea change in British society. It was met with acclaim, transferring to the West End’s Duke of York Theatre, and moral outrage in equal measure. The Proud Trust. Contact. Hidden History Project – Lancashire LGBT.

Lancashire LGBT Centre and Lancashire Archives was awarded Heritage Lottery funding to work with volunteers to research and celebrate East Lancashire’s LGBT (lesbian, gay, bisexual and transgender) past, present and future. “I wholeheartedly support the application to the Heritage Lottery to help fund the proposed project to uncover the LGBT heritage of Burnley, which happens to be my birthplace. The uncovering of individual and collective experience, which would allow people to feel they belong to a genuine community, would benefit them, of course, and society as a whole” – Ian McKellen For more information, visit our website at www.lgbthiddenhistory.co.uk or email Paul at burnleylgbt@yahoo.co.uk or follow us on Twitter @burnleylgbt to find out more and of course, follow us on our blog! Hidden History uncovered a number of interesting stories from Burnley’s LGBT heritage. LGBT Hidden History. Pride of Place.

Put LGBTQ Heritage on the Map. We have teamed up with Leeds Beckett University and community groups nationwide to record and celebrate the places lived, loved, worked and played in by lesbian, gay, bisexual, transgender and queer (LGBTQ) people over the centuries. The project, called Pride of Place, will run until summer 2016, combining images, archive materials and research with the places and stories that are important to LGBTQ history.

You can contribute too - either by plotting the places you know of on our interactive map, or why not help the research team and become a digital volunteer? Which places do you care about? Share the places you care about on our interactive map where you can: LGBT Hidden History. Manchester Pride's New OUT! App. Islington Mind - Outcome. Outcome is a client-led LGBT service that has been run by a lesbian, gay, bisexual and transgendered team for 15 years and is one of the few LGBT mental health services in London. We meet every Tuesday between 10:30am and 4:00pm and usually have 20-25 clients in each session. Our main aim is to provide a sanctuary for LGBT people - somewhere safe where they can be themselves, socialise free from discrimination, receive therapies to improve their mental health, learn new skills and acquire knowledge to improve their quality of life.

We hold monthly meetings at different places in the London area for that purpose. Although London-based, we are a national organisation and welcome members from all over the country. Membership is open to all lesbian, gay and bisexual writers, beginners as well as published authors. GALYIC. Galop - the LGBT+ anti-violence charity. Home. Families Together London. Equality Network — Promoting lesbian, gay, bisexual and transgender equality & rights across Scotland. Equaldex: The Collaborative LGBT Rights Knowledge Base. Encompass Network - Britain's Bimonthly Bi Magazine - Bi Community News.