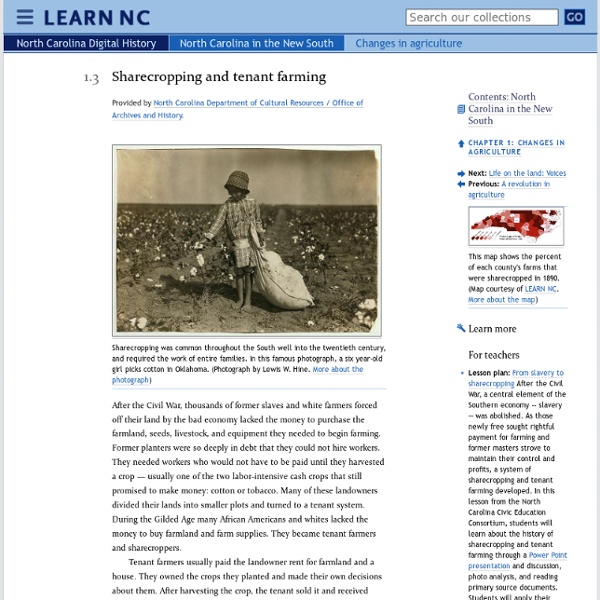 Sharecropping was common throughout the South well into the twentieth century, and required the work of entire families. In this famous photograph, a six year-old girl picks cotton in Oklahoma. (Photograph by Lewis W. Hine. More about the photograph) After the Civil War, thousands of former slaves and white farmers forced off their land by the bad economy lacked the money to purchase the farmland, seeds, livestock, and equipment they needed to begin farming. Tenant farmers usually paid the landowner rent for farmland and a house. Sharecroppers seldom owned anything. Over the years, low crop yields and unstable crop prices forced more farmers into tenancy. Next: Life on the land: Voices

Sharecropping Sharecropping was an agricultural labor system that developed in Georgia and throughout the South following Reconstruction and lasted until the mid-twentieth century. Under this arrangement, laborers with no land of their own worked on farm plots owned by others, and at the end of the season landowners paid workers a share of the crop. Origins Sharecropping evolved following the failure of both the contract labor system and land reform after the Civil War (1861-65). Republican Party The Republican Party originated in 1854 as a result of the Kansas-Nebraska Act. This piece of legislation split Whig Party members along regional lines and illustrated that the party could no longer function as a single entity. Former Northern Whigs united with the Free Soil Party and the American Party to create the Republican Party. The first person elected President of the United States from the Republican Party was Abraham Lincoln in the election of 1860. Many white Southerners believed that Lincoln was an abolitionist and that he intended to end slavery as soon as he took office. Lincoln endorsed the official Republican philosophy that opposed slavery, but he, like the majority of other Republicans, firmly believed that the federal government could not end slavery where it already existed.

Carpetbaggers & Scalawags - American Civil War In general, the term “carpetbagger” refers to a traveler who arrives in a new region with only a satchel (or carpetbag) of possessions, and who attempts to profit from or gain control over his new surroundings, often against the will or consent of the original inhabitants. After 1865, a number of northerners moved to the South to purchase land, lease plantations or partner with down-and-out planters in the hopes of making money from cotton. At first they were welcomed, as southerners saw the need for northern capital and investment to get the devastated region back on its feet. They later became an object of much scorn, as many southerners saw them as low-class and opportunistic newcomers seeking to get rich on their misfortune.

The Carpetbagger - Civil War - Brief History of Carpetbags and Carpetbaggers With the rapid expansion of railroads in the 1840’s and 1850’s . Ordinary people were traveling in large numbers, and there was an need for cheap luggage ,so thousands of carpetbags were manufactured. They were made by saddle makers in many town and cities and were many sizes and shape. They were called Carpetbags because the makers would buy old carpets and construct the bags from the pieces of carpet that were not completely worn out. Reconstruction - American Civil War At the outset of the Civil War, to the dismay of the more radical abolitionists in the North, President Abraham Lincoln did not make abolition of slavery a goal of the Union war effort. To do so, he feared, would drive the border slave states still loyal to the Union into the Confederacy and anger more conservative northerners. By the summer of 1862, however, the slaves themselves had pushed the issue, heading by the thousands to the Union lines as Lincoln’s troops marched through the South. Their actions debunked one of the strongest myths underlying Southern devotion to the “peculiar institution”–that many slaves were truly content in bondage–and convinced Lincoln that emancipation had become a political and military necessity.

15th Amendment 15th Amendment Would you like not having the ability to vote for what you want just because of the color of your skin? This was the case for black men in the late 1800’s. Equal rights between whites and black’s during the late 1800’s was a major problem. Although, Reconstruction worked to establish one law and one government for men of all races, the problems of separate rights still existed. It took many years and amendments before the problems of separate rights would begin to change for the blacks. Slavery By Another Name Bento After the Civil War, former slaves sought jobs, and planters sought laborers. The absence of cash or an independent credit system led to the creation of sharecropping. Sharecropping is a system where the landlord/planter allows a tenant to use the land in exchange for a share of the crop. This encouraged tenants to work to produce the biggest harvest that they could, and ensured they would remain tied to the land and unlikely to leave for other opportunities. In the South, after the Civil War, many black families rented land from white owners and raised cash crops such as cotton, tobacco, and rice. In many cases, the landlords or nearby merchants would lease equipment to the renters, and offer seed, fertilizer, food, and other items on credit until the harvest season.

Voting Rights and the 14th Amendment History is messy. And so are politics. A good historian resists the urge to reduce the many causes or meanings of an event to a single one. One of the most persistent urges of students of American history is to try to decide whether the Civil War was "really" about slavery or about states' rights.