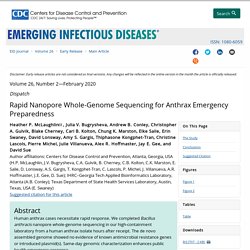 Bioterrorism is one of the main public health categorical domains. 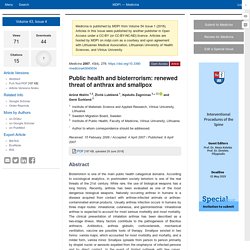 According to sociological analytics, in postmodern society terrorism is one of the real threats of the 21st century. While rare, the use of biological weapons has a long history. Recently, anthrax has been evaluated as one of the most dangerous biological weapons. Naturally occurring anthrax in humans is a disease acquired from contact with anthrax-infected animals or anthrax-contaminated animal products.

Usually anthrax infection occurs in humans by three major routes: inhalational, cutaneous, and gastrointestinal. This is an open access article distributed under the Creative Commons Attribution License which permits unrestricted use, distribution, and reproduction in any medium, provided the original work is properly cited (CC BY 4.0). MDPI and ACS Style. CDC EID - Volume 23, Number 1—January 2017. Au sommaire: Modeling Tool for Decision Support during Early Days of an Anthrax Event. 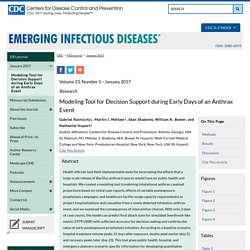 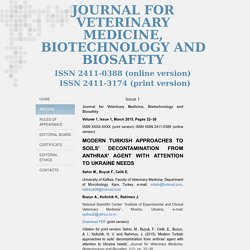 NATIONAL ACADEMY OF AGRARIAN SCIENCES OF UKRAINE - 2016 - JOURNAL FOR VETERINARY MEDICINE, BIOTECHNOLOGY AND BIOSAFETY UNEARTHING ANTHRAX— APPLICATION OF GENOTYPING FOR EXPLORING A CRYPTIC LIFE CYCLE OF BACILLUS ANTHRACIS IN SOIL. PLOS 09/06/16 Redefining the Australian Anthrax Belt: Modeling the Ecological Niche and Predicting the Geographic Distribution of Bacillus anthracis. Abstract The ecology and distribution of B. anthracis in Australia is not well understood, despite the continued occurrence of anthrax outbreaks in the eastern states of the country. 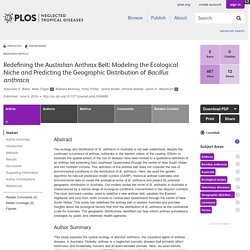 Efforts to estimate the spatial extent of the risk of disease have been limited to a qualitative definition of an anthrax belt extending from southeast Queensland through the centre of New South Wales and into northern Victoria. This definition of the anthrax belt does not consider the role of environmental conditions in the distribution of B. anthracis.

Here, we used the genetic algorithm for rule-set prediction model system (GARP), historical anthrax outbreaks and environmental data to model the ecological niche of B. anthracis and predict its potential geographic distribution in Australia. Rev. sci. tech. Off. int. Epiz. , 2014, 33 (2), Anthrax as an example of the One Health concept. PLOS 05/06/14 Interactions between Bacillus anthracis and Plants May Promote Anthrax Transmission. Abstract Environmental reservoirs are essential in the maintenance and transmission of anthrax but are poorly characterized. 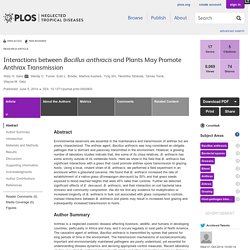 The anthrax agent, Bacillus anthracis was long considered an obligate pathogen that is dormant and passively transmitted in the environment. However, a growing number of laboratory studies indicate that, like some of its close relatives, B. anthracis has some activity outside of its vertebrate hosts. Here we show in the field that B. anthracis has significant interactions with a grass that could promote anthrax spore transmission to grazing hosts. BioMed Research International Volume 2014 (2014), Possible Use of Bacteriophages Active against Bacillus anthracis and Other B. cereus Group Members in the Face of a Bioterrorism Threat.

Clinical and Vaccine Immunology, June 2006, p. 671-677, Vol. 13, No. 6 Detection of Anthrax Toxin in the Serum of Animals Infect. + Author Affiliations Several strategies that target anthrax toxin are being developed as therapies for infection by Bacillus anthracis. Although the action of the tripartite anthrax toxin has been extensively studied in vitro, relatively little is known about the presence of toxins during an infection in vivo.

We developed a series of sensitive sandwich enzyme-linked immunosorbent assays (ELISAs) for detection of both the protective antigen (PA) and lethal factor (LF) components of the anthrax exotoxin in serum. The assays utilize as capture agents an engineered high-affinity antibody to PA, a soluble form of the extracellular domain of the anthrax toxin receptor (ANTXR2/CMG2), or PA itself. Sandwich immunoassays were used to detect and quantify PA and LF in animals infected with the Ames or Vollum strains of anthrax spores. The gram-positive Bacillus anthracis bacterium is the causative agent of anthrax. For histology, lungs and spleens were removed from the guinea pigs postmortem. UNIVERSITY OF FLORIDA - 2010 - Thèse en ligne : ECOLOGICAL NICHE MODELING OF A ZOONOSIS: A CASE STUDY USING ANTHRAX OUTBREAKS AN.