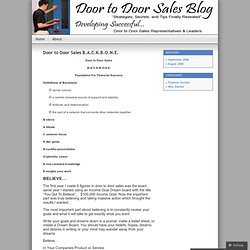 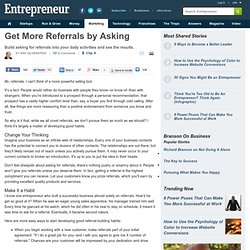 Ah, referrals. I can't think of a more powerful selling tool. It's a fact: People would rather do business with people they know--or know of--than with strangers. Sales techniques - The ABC and secrets of selling. 5 mind hacks for salespeople. Similar hobbies: the secret ingredient to closing the deal. When I first started selling, I knew nothing about closing or how to make a good sales presentation. 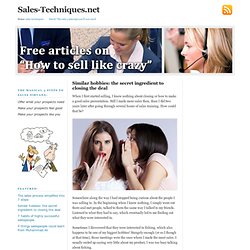 Still I made more sales then, than I did two years later after going through several hours of sales training. How could that be? Somewhere along the way I had stopped being curious about the people I was selling to. In the beginning when I knew nothing, I simply went out there and met people, talked to them the same way I talked to my friends. Listened to what they had to say, which eventually led to me finding out what they were interested in. Sometimes I disvovered that they were interested in fishing, which also happens to be one of my biggest hobbies! It was almost like they were buying me, not the product – And that ladies and gentlemen are one of the biggest secrets of selling. 7 habits of highly successful salespeople. Do you think the best salespeople just happens to be more lucky than you? 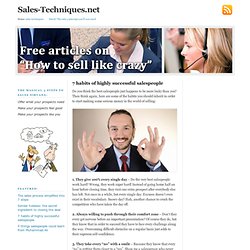 Then think again, here are some of the habits you should inherit in order to start making some serious money in the world of selling: 1. They give 100% every single day – Do the very best salespeople work hard? Wrong, they work super hard! Instead of going home half an hour before closing time, they visit one extra prospect after everybody else has left. 2. 3. 4. The power of listening. 5 things salespeople could learn from Muhammad Ali. Muhammed Ali is probably the greatest boxer the world has even seen. 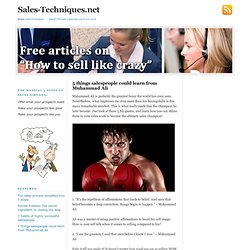 Nevertheless, what impresses me even more than his boxingskills is this mans remarkable mindset. This is what really made him the champion he later became. Thank You Letters for Meetings - Examples. Here are a couple examples of thank you letters for meetings. 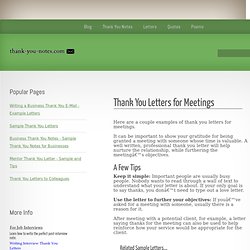 It can be important to show your gratitude for being granted a meeting with someone whose time is valuable. A well written, professional thank you letter will help nurture the relationship, while furthering the meetingâ€™s objectives. Thank You Letters for Meetings - Examples. How to Push Prospects 'Off the Fence' Once you know your clients' fear factors, you can find ways around them. 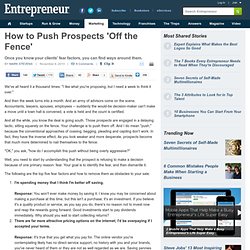 We've all heard it a thousand times: "I like what you're proposing, but I need a week to think it over. " And then the week turns into a month. And an army of advisors come on the scene. Accountants, lawyers, spouses, employees -- suddenly the would-be decision-maker can't make a move until a town hall is convened, a vote is held and the count is certified. And all the while, you know the deal is going south. "OK," you ask, "how do I accomplish this push without being overly aggressive? " The Columbo Close. Columbo, the 1970's classic TV detective character, was one of the best closers of all time. 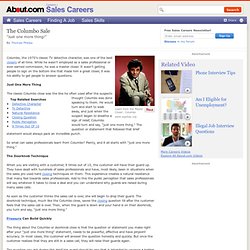 While he wasn't employed as a sales professional or ever earned commission, he was a master closer. It wasn't getting people to sign on the bottom line that made him a great closer, it was his ability to get people to answer questions. Just One More Thing The classic Columbo close was the line he often used after the suspects thought Columbo was done speaking to them. He would turn and start to walk away, and just when the suspect began to breathe a sign of relief, Columbo would turn and say, "just one more thing. " 3 Ways to Close a Sale. Edit Article Easing Into the CloseClosing the SaleMaking a Lasting (Favorable) Impression Edited by Seth, Sondra C, Melanie Mendelson - www.GoForYourDreams.com, Tom Viren and 16 others. Are You Talking Your Way Out of a Sale? - Focusing on Sales. If the client says 'tell me about yourself,' don't. 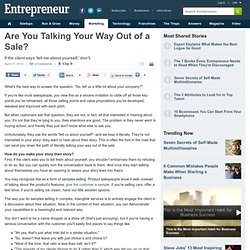 What's the best way to answer the question, "So, tell us a little bit about your company? " If you're like most salespeople, you view this as a sincere invitation to rattle off all those key points you've rehearsed, all those selling points and value propositions you've developed, tweaked and improved with each pitch. But when customers ask that question, they are not, in fact, all that interested in hearing about you. 3 Weapons for the True Salesperson - Salesman Tips. I can recognize a salesperson from a mile away. 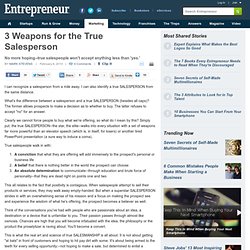 I can also identify a true SALESPERSON from the same distance. What's the difference between a salesperson and a true SALESPERSON (besides all caps)? The former allows prospects to make a decision as to whether to buy. The latter refuses to accept "no" for an answer. Top 10 Sales Killers. Our expert shares the most common mistakes salespeople make--so you don't get caught making them! Any veteran in business can tell you a story about the one that got away. Veterans who are successful in business today learned valuable lessons from those situations and, hopefully, never repeated them.

As challenging as the business of selling might be for some, losing sales is unbelievably easy. Learn from the mistakes of others so you won't have many of the sad stories to tell. Sales Killer #1: Lack of professional appearance. 7 Common Sales Mistakes, and How to Avoid Them. Top Ten Sales Questions to Close the Deal. The Top 10 Internet Marketing Strategies for Increasing Your Sales. YOU ARE HERE: Home > Marketing Tips > Top 10 Marketing Strategies After reading this article you will learn: How to increase your website’s results with conversion rate optimization; The "Top 10" marketing strategies you can use to increase sales; The "Best Practices" of increasing your Search Engine Rankings with SEO.

Are you searching for creative marketing strategies to grow your business? Looking for tactics that will increase lead flow and provide an impressive effect on your sales?