How to use CSS masking. When you clip an element using the clip-path property the clipped area becomes invisible. 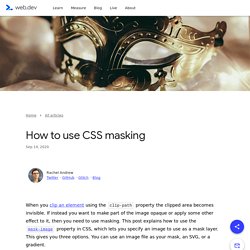 If instead you want to make part of the image opaque or apply some other effect to it, then you need to use masking. This post explains how to use the mask-image property in CSS, which lets you specify an image to use as a mask layer. This gives you three options. You can use an image file as your mask, an SVG, or a gradient. Browser compatibility # Most browsers only have partial support for the standard CSS masking property. While browser support using the prefixed property is good, when using masking to make text on top of an image visible take care of what will happen if masking is unavailable. Masking with an image # The mask-image property works in a similar way to the background-image property. A fully transparent area will cause the part of the image under that area to be invisible. 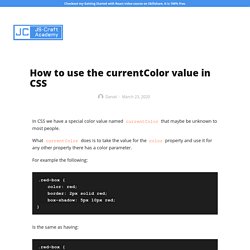 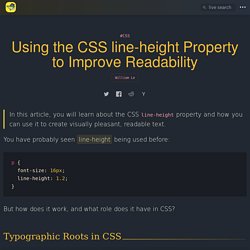 You have probably seen line-height being used before: But how does it work, and what role does it have in CSS? Typographic Roots in CSS. Posts About CSS. Css – Vegibit. CSS: Learn CSS, CSS3, Bootstrap, Sass, LESS & more. The Best CSS and CSS3 Tutorials. Cascading Style Sheets (CSS) CSS is an acronym for Cascading Style Sheets. 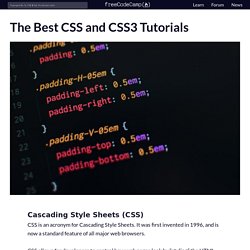 It was first invented in 1996, and is now a standard feature of all major web browsers. CSS allows for developers to control how web pages look by “styling” the HTML structure of that page. CSS specifications are maintained by the World Wide Web Consortium (W3C). CSS Cheat Sheet. Style Color. 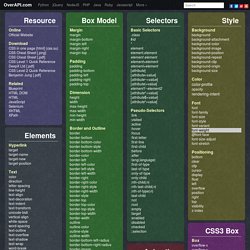 Learn the CSS border-radius property by building a calculator. Have you ever seen a button on a web page that has rounded edges? 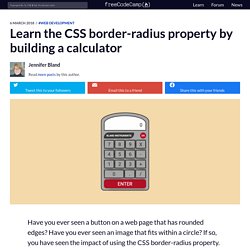 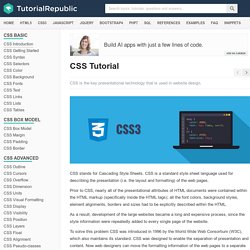 CSS stands for Cascading Style Sheets. CSS is a standard style sheet language used for describing the presentation (i.e. the layout and formatting) of the web pages. Prior to CSS, nearly all of the presentational attributes of HTML documents were contained within the HTML markup (specifically inside the HTML tags); all the font colors, background styles, element alignments, borders and sizes had to be explicitly described within the HTML. As a result, development of the large websites became a long and expensive process, since the style information were repeatedly added to every single page of the website. To solve this problem CSS was introduced in 1996 by the World Wide Web Consortium (W3C), which also maintains its standard. CSS3 is the latest version of the CSS specification. HTML & CSS Crash Course.

Are you curious about web development but don't know where to start? 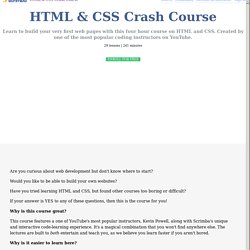 Would you like to be able to build your own websites? Have you tried learning HTML and CSS, but found other courses too boring or difficult? If your answer is YES to any of these questions, then this is the course for you! Why is this course great? This course features a one of YouTube's most popular instructors, Kevin Powell, along with Scrimba's unique and interactive code-learning experience. CSS Débutant - tutoriels CSS GRATUIT - feuilles de style CSS. Introduction to the Intersection Observer JavaScript API. CSS Variables - An introduction to CSS custom properties. JavaScript Teacher - freeCodeCamp.org News. Web Development Tutorials For Complete Beginners. Finally, a CSS only solution to :hover on touchscreens. After pseudoelements. I have a confession to make: I kind of love the ::before and ::after pseudoelements. 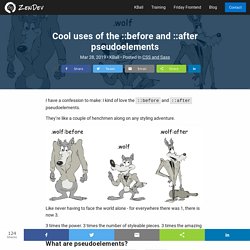 They’re like a couple of henchmen along on any styling adventure. Like never having to face the world alone - for everywhere there was 1, there is now 3. 3 times the power. 3 times the number of styleable pieces. 3 times the amazing visual effects you can create. What are pseudoelements? Now if you’ve never encountered ::before and ::after before, you may be asking “what is this ::before pseudoelement you speak of?” 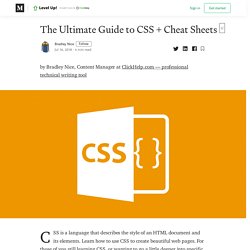 CSS Custom Properties - CSS-Tricks. CSS Gradients - CSS-Tricks. CSS Specificity: Things You Should Know. The Ultimate Guide to Learning CSS. CSS Layout Once you have the ability to target html elements for styling, layout is the next core concept to master. Layout involves manipulating how elements lay out on the page. How much space do they take? Are they side by side or on top of each other? How do you manipulate this to create exactly the design you desire? Increasingly layouts can be done purely with CSS Grid and Flexbox, but for those who still must support older browsers, grid systems built using Flexbox or even floats are still useful.

Version history 14 November 2017 Outlook.com and the Outlook iOS app added support for CSS background images and some related properties, as well as certain Flexbox and Grid properties. Also added iOS 11 Mail to the guide, with no noticeable differences from iOS 10. 22 September 2017. Code.tutsplus. How to Write CSS That Works in Every Browser, Even the Old Ones – Mozilla Hacks – the Web developer blog. Responsive Vertical Rhythm with CSS Custom Properties and CSS Calc. Front-end Style Guides. Tutorials Archives. Tutorials In this section you will find in-depth how-tos involving common web development and web design techniques. Twisted Colorful Spheres with Three.js By Mario Carrillo on January 26, 2021 Learn how to deform and color spheres to create an interesting animation with Three.js. Drawing 2D Metaballs with WebGL2 By Georgi Nikolov on January 19, 2021.

Remove Unnecessary CSS With PurifyCSS and Grunt. In this tutorial I’ll show you how to use Grunt and PurifyCSS to create a super-lightweight stylesheet with minimal effort. We’ll install it, then learn how to run it with and without Grunt, to give us much more performant styles. PurifyCSS is a JavaScript tool which parses your markup files (HTML, PHP, or even JavaScript) then cross-references them with whatever CSS you’re using. Any selectors in your CSS which aren’t being used will be removed, leaving you with only the styles that you actually need.

To install PurifyCSS you can either grab the repo directly from GitHub, or install it via npm (more details on how that’s done via this tutorial from Kezz). The files we’ll be using to demonstrate PurifyCSS are a full Bootstrap stylesheet and an index.html. To run PurifyCSS on this stylesheet, go to the command line prompt, navigate to the project folder and run a command with the following: Our final command looks like this: Then, if we don’t already have it, we need to install Grunt: Webdesign.tutsplus. The CSS Box Model. By Chris Coyier On box model At the risk of over-repeating myself: every element in web design is a rectangular box. CSS Reference. CSS Almanac. CSS Reference. Ce que vous avez toujours voulu savoir sur CSS - Vincent De Oliveira. Aujourd’hui, c’est un fait: tout le monde connaît et utilise CSS. Et c’est tant mieux! Cependant, bien que le langage en lui-même soit plutôt simple, certains aspects peuvent sembler encore obscurs.

Cet article fait suite à une présentation que j'ai donnée lors de la Kiwi Party 2013, puis lors des MSTechDays 2014. CSS Variables: Why Should You Care?   Use Tomorrow's CSS Syntax Today. Stuff you can do with the "Checkbox Hack" By Chris Coyier On The "Checkbox Hack" is where you use a connected label and checkbox input and usually some other element you are trying to control, like this: <label for="toggle-1">Do Something</label><input type="checkbox" id="toggle-1"><div>Control me</div> Powerful CSS-Techniques For Effective Coding. Advertisement Meet the new Sketch Handbook, our brand new Smashing book that will help you master all the tricky, advanced facets of Sketch. Filled with practical examples and tutorials in 12 chapters, the book will help you become more proficient in your work. Get the book now → Sometimes being a web-developer is just damn hard. 53 CSS-Techniques You Couldn't Live Without.