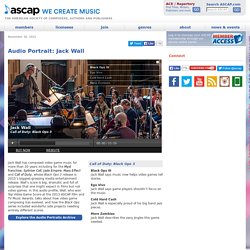 Wall’s score is big, dramatic and full of surprises that one might expect in films but not video games. CALL OF DUTY — An Interview with Composer Jack Wall — GameTyrant. For years, we have had the privilege of experiencing some world-class soundtrack composition from Jack Wall, such as what we can hear in Myst 4, Jade Empire, and Mass Effect to name a few titles. 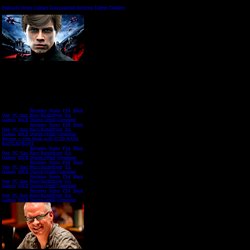 In Call of Duty: Black Ops III, you can expect that his caliber of composition has only reached all new levels. It is everything you could expect from Jack Wall, plus a ton more. We’ve heard him deliver amazing epic pieces, beautiful ambient/electronic arrangements, but…big band? Yes, you will hear some big band along with Jack’s traditional electronic and orchestral styles in this album. With the help of virtuoso cellist Tina Guo, outstanding vocals from Antonia Bennett, as well as lyrics and vocal contributions by Rob and Cindy Shapiro, the collaborations in this album have helped craft a very diverse and original sound that tells a very dynamic and intriguing new story in the Call of Duty series. Forbes Welcome. An Exclusive Interview with Jack Wall. An Interview with the Composers at PAX East 2013. Composer Interview: Wall of Sound. Conducted May 4, 2010 by the OC ReMix community: OCR Staff: Jack, tell us about your role as the lead composer for Mass Effect 2 - what it was like leading your team to score one of the most anticipated sequels of 2010? 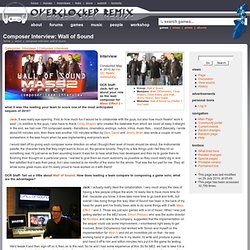 Jack: It was really eye-opening. First, to how much fun it would be to collaborate with the guys, but also how much freakin' work it was! :) In addition to the guys, I also have to thank Cindy Shapiro who created the database from which we could all keep it straight. In the end, we had over 750 composed assets - transitions, cinematics, endings, outros, intros, music files... crazy!! I would start off by giving each composer some direction on what I thought their level of music should be about, the instrumental palette, the character traits that they might want to focus on, the general tonality. OCR Staff: Tell us a little about Wall of Sound. Jack: I actually really liked the collaboration. FOX News getsitwrong, per their usual stupidity. Jimmy: What they said. Sound Byte: Meet the Composer – Jack Wall. Composer Jack Wall certainly has an impressive resume. 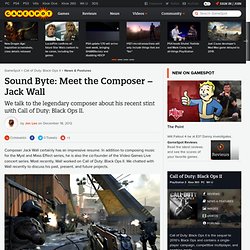 In addition to composing music for the Myst and Mass Effect series, he is also the co-founder of the Video Games Live concert series. Most recently, Wall worked on Call of Duty: Black Ops II. We chatted with Wall recently to discuss his past, present, and future projects. How did you get your start in the game music-making field? I started working in games in 1996 with a company called Postlinear Entertainment; great name for a game company.

For years, especially in the early to mid-2000s, there seemed to be a big push from many in the industry to have the music change based on what the player did, but I didn’t see it that way. You won your first award for the OST of Myst III: Exile. Interview Video Games Live. Abbey Road Studios [EN + DE Untertitel] (2012) Jack Wall and the Music of Mass Effect 2. Call of Duty: Black Ops II Gets Musical Makeover from Jack Wall. December 6, 2012 Copy and paste the HTML below to embed this audio onto your web page. 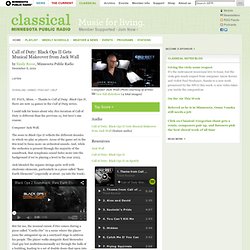 Audio player code: ST. PAUL, Minn. — Thanks to Call of Duty: Black Ops II, there are now 14 games in the Call of Duty series. I could talk for hours about why this iteration of Call of Duty is different than the previous 13, but here's one reason: Composer Jack Wall. The score to Black Ops II reflects the different decades in which we play as players. Jack blended the organic strings quite well with electronic elements, particularly in a piece called "Rare Earth Elements" (especially at about :39 into the track). But for me, the musical raison d'être comes during a piece called "Cordis Die" in a scene where the player joins the antagonist up on a courtyard stage to address his people. 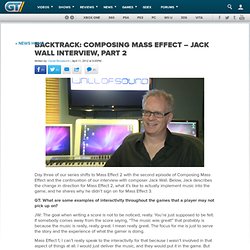 Below, Jack describes the change in direction for Mass Effect 2, what it’s like to actually implement music into the game, and he shares why he didn’t sign on for Mass Effect 3. GT: What are some examples of interactivity throughout the games that a player may not pick up on? JW: The goal when writing a score is not to be noticed, really. You’re just supposed to be felt. If somebody comes away from the score saying, “The music was great!” Mass Effect 1, I can’t really speak to the interactivity for that because I wasn’t involved in that aspect of things at all.

I would get a level. I was trying to find all the transitions between cinematics, conversation because that’s a big part of BioWare games. BackTrack: Composing Mass Effect – Jack Wall Interview, Part 1. To accompany our Composing Mass Effect video series, we're presenting written versions of the composer interviews here on Side Mission with much more info than we could fit in each episode. 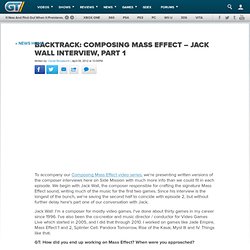 We begin with Jack Wall, the composer responsible for crafting the signature Mass Effect sound, writing much of the music for the first two games. Since his interview is the longest of the bunch, we're saving the second half to coincide with episode 2, but without further delay here's part one of our conversation with Jack. Jack Wall: I'm a composer for mostly video games. I've done about thirty games in my career since 1996. I've also been the co-creator and music director / conductor for Video Games Live which started in 2005, and I did that through 2010. GT: How did you end up working on Mass Effect? JW: Back in 2004 and 05, I did Jade Empire for BioWare. So they asked me to audition for their next game. That piece by the way is called Uncharted Worlds and that was Sam's audition. 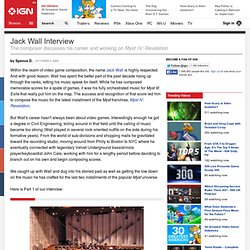 And with good reason. Wall has spent the better part of the past decade rising up through the ranks, letting his music speak for itself. While he has composed memorable scores for a spate of games, it was his fully orchestrated music for Myst III: Exile that really put him on the map. The success and recognition of that score led him to compose the music for the latest installment of the Myst franchise, Myst IV: Revelation. But Wall's career hasn't always been about video games.

Interview with composer Jack Wall. Hi Jack, thanks for taking the time to do this interview. 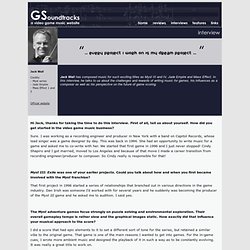 First of all, tell us about yourself. How did you get started in the video game music business? Sure. I was working as a recording engineer and producer in New York with a band on Capitol Records, whose lead singer was a game designer by day. This was back in 1994. Myst III: Exile was one of your earlier projects. That first project in 1996 started a series of relationships that branched out in various directions in the game industry. The Myst adventure games focus strongly on puzzle solving and environmental exploration. I did a score that had epic elements to it to set a different sort of tone for the series, but retained a similar vibe to the original game.

Let us talk about Jade Empire. I wanted to do something that was a hybrid of eastern and western music. How much creative freedom were you given by the developers at Bioware in order to find a unique and creative soundscape for the game? Thank you! Composers are composers.