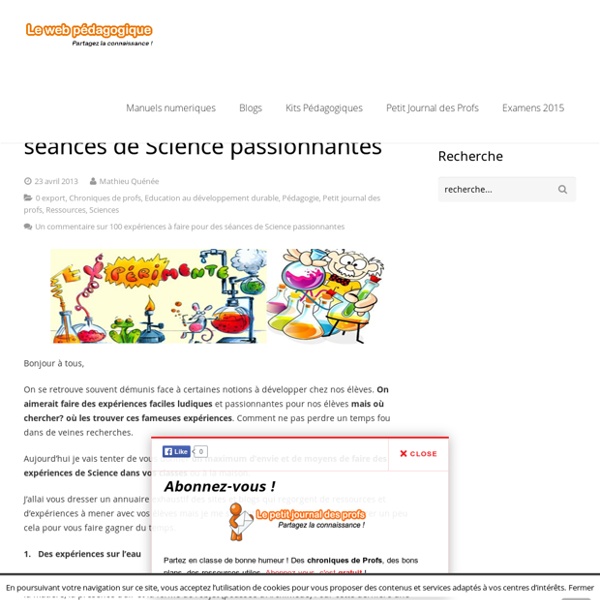 Beautiful Reactions Precipitation Chemical Garden Color Change Metal Displacement Crystallization From Quark to Quasar: The Observable Universe “That tiny dot that you can hardly make out in the screen is the Virgo Supercluster, where our galaxy, our local group and several others reside. All of those other dots are superclusters, each containing perhaps trillions of stars. Via WikiMedia If you really want a headache (the good kind), take a long look at this “photo”. No, this is not a photo of the cosmic microwave background radiation (which you can actually see for yourself if you change your television channel to one of the “fuzzy” stations), neither is it a collection of graphs of a cell structure.

Building with Bamboo: 13 Super Sustainable Structures - WebEcoist It’s 100% natural, thrives in diverse climates, grows up to a whopping 39 inches per day and is super-strong; why isn’t bamboo already used more often as a building material? While bamboo structures have long been common in Asia and the South Pacific, they’re only just gaining prominence in the rest of the world. From schools to disaster shelters, these 13 bamboo buildings prove just how strong, durable, eco-friendly and visually pleasing this perennial evergreen grass can be. Water and Wind Cafe, Vietnam (images via: vo trong nghia) Made almost entirely of bamboo without the use of a single nail, the Water and Wind Cafe in the Binh Duong province of Vietnam is just one example of incredible bamboo structures designed by architecture firm Vo Trong Nghia.

Video Library Our new educational effort is called Pivot Interactives. The new Pivot Interactives website offers a powerful platform for students to learn science concepts and science process skills. It contains classroom-ready activities with integrated data tables and graphing capabilities, teacher-modifiable student instructions, and allows teachers to create classes to assign and grade student work. Jane Fonda Revealed As Heroic CIA Operative LANGLEY, Va. — Jane Fonda, the actress labeled a traitor by the veteran community because of her activities during the Vietnam War, was actually a CIA operative who used her perceived anti-war stance as a cover that provided crucial intelligence for American forces, according to new documents declassified this week. “She was able to get to places and discover things that nobody else could,” said Simon Grey, a freelance investigative reporter who discovered “Operation Barbarella” the official code name for Fonda’s mission to North Vietnam., through a Freedom of Information request. During her time in country Fonda memorized the names, ranks and positions of nearly 50 NVA officers that she came in contact with as well as the coordinates for headquarters buildings and other possible targets of interest for the Department of Defense, the documents reveal. “Things got much better after she visited,” said Sen.

Kids science: Electricity 102 Science >> Physics for Kids Important things to know about electricity? Conductors and insulators - Conductors are materials that allow electricity to flow easily. Most types of metal are good conductors, which is why we use metal for electrical wire. Copper is a good conductor and isn't too expensive, so it's used a lot for the wiring in homes today. Direct Measurement Videos Direct Measurement Videos are short, high-quality videos of real events that allow students to easily explore physical phenomena. Many of the videos are paired with classroom-ready activities that integrate videos into the introductory mechanics curriculum. Ready to explore?

concrete to program As someone who has previously taught computer programming for nearly a decade, I’m often asked questions that involve “what’s the best way to go about learning to program computers,” or “what’s the best way to get a software engineering job,” or “how can I learn to build mobile or web apps?” Most of the readers of this blog have probably faced the same question at some point in their career. How did you answer it? I’ve seen many different responses: “come up with an idea for an app and build it,” or “get a computer science degree,” or “go read The Little Schemer,” or “join an open-source project that excites you,” or “learn Ruby on Rails.”

Thunderbolt Kids If we want to keep a record of how we constructed a specific electric circuit, we can take a photo of it. If we do not have a camera, we can remember the circuit by drawing a sketch. Look at the sketch below which Farrah drew of the circuit that you made in the activity with the paperclip switch.