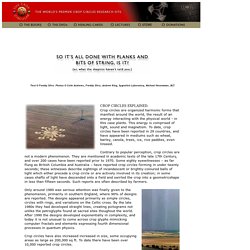 They are mentioned in academic texts of the late 17th Century, and over 200 cases have been reported prior to 1970. Some eighty eyewitnesses – as far flung as British Columbia and Australia – have reported crop circles forming in under twenty seconds; these witnesses describe sightings of incandescent or brightly-coloured balls of light which either precede a crop circle or are actively involved in its creation; in some cases shafts of light have descended onto a field and swirled the crop into a geometricshape in less than fifteen seconds. Such reports are often described by farmers. Only around 1980 was serious attention was finally given to the phenomenon, primarily in southern England, where 90% of designs are reported. Crop Circle Quest. Crop Circles Explained. According to some estimates, crop circles appear every week somewhere around the world. 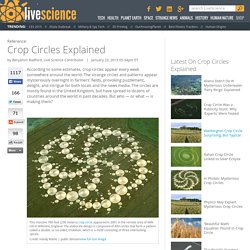 The strange circles and patterns appear mysteriously overnight in farmers' fields, provoking puzzlement, delight, and intrigue for both locals and the news media. The circles are mostly found in the United Kingdom, but have spread to dozens of countries around the world in past decades. But who — or what — is making them? This massive 780-foot (238 meters) crop circle appeared in 2001 in the remote area of Milk Hill in Wiltshire, England. Crop Circle Creation. Crop circles 'created using GPS, lasers and microwaves' Traditionally planks of wood known as "stompers" and lengths of rope have been used to make accurate patterns in fields, with designers even using bar stools to hop from one flattened section to another. 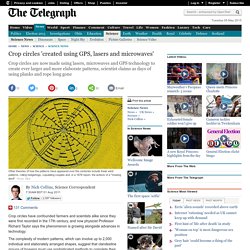 Other theories of how the patterns appeared over the centuries include freak wind patterns, rolling hedgehogs, copulating couples and, in a 1678 report, the actions of a "mowing devil". More recently, conspiracy theorists have linked the patterns to UFOs or other alien activity, though some hoaxers have admitted to deliberately imitating flying saucer "nests". More than 10,000 examples have been documented in the past 500 years, with one new pattern now appearing somewhere in the world every summer evening. Prof Taylor said: “Crop-circle artists are not going to give up their secrets easily. Mysterious circles keep cropping up. By BBC News Online's Giles Wilson Three mysteries of the 80s remain: Eddie The Eagle, Limahl's haircut, and crop circles. 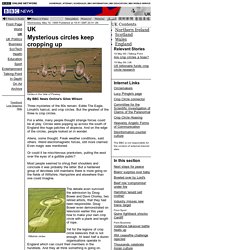 But the greatest of the three is crop circles. For a while, many people thought strange forces could be at play. Circles were popping up across the south of England like huge patches of alopecia. And on the edge of the circles, people looked on in wonder. Aliens, some thought. Or could it be mischievous pranksters, pulling the wool over the eyes of a gullible public? Most people seemed to shrug their shoulders and conclude it was probably the latter.

The debate even survived the admission by Doug Bower and Dave Chorley, two retired artists, that they had been responsible. Yet for the legions of crop circle believers that is not enough. It is a view which has been given a shot in the arm by the announcement that US billionaire Laurance Rockefeller, 88, is to fund research into whether they are genuine. As for what causes the radiation, she says she cannot answer. Crop Circles. The crop circle phenomenon is a truly magical event, on a par with the majestic and shimmering sight of a peacock's outstretched tail feathers on a summer's day, or entering the enigmatic and unfathomable depths of an Andrei Tarkovsky film. 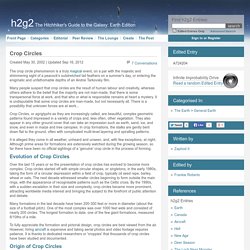 Many people suspect that crop circles are the result of human labour and creativity, whereas others adhere to the belief that the majority are not man-made, that there is some transpersonal force at work, and that who or what is responsible remains at heart a mystery. It is undisputable that some crop circles are man-made, but not necessarily all. There is a possibility that unknown forces are at work... Crop Circles: A Not-So-Convincing Case. Skeptical Inquiree Ben Radford Volume 38.5, September/October 2014 Q: I wrote a letter to CSI asking them to investigate crop circles to determine if they are a hoax. 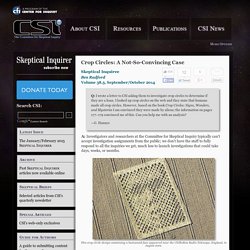 I looked up crop circles on the web and they state that humans made all crop circles. However, based on the book Crop Circles: Signs, Wonders, and Mysteries I am convinced they were made by aliens; the information on pages 177–179 convinced me of this. A: Investigators and research­ers at the Committee for Skeptical Inquiry typically can’t accept investigation assignments from the public; we don’t have the staff to fully respond to all the inquiries we get, much less to launch investigations that could take days, weeks, or months.

This crop circle design containing a humanoid face appeared near the Chilbolton Radio Telescope, England, in August 2001. However, I was intrigued by this claim and agreed to tackle it in the context of a “Skeptical Inquiree” column if I could. Circular Reasoning: The ‘Mystery’ of Crop Circles and Their ‘Orbs’ of Light. Special Report Joe Nickell Volume 26.5, September / October 2002 Since they began to capture media attention in the mid 1970s, and to proliferate and evolve through the decades of the 1980s and 1990s, crop circles have provided mystery and controversy. 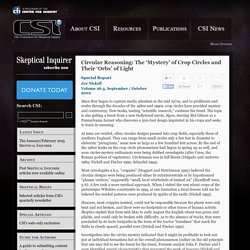 New books, touting “scientific research,” continue the trend. The topic is also getting a boost from a new Hollywood movie, Signs, starring Mel Gibson as a Pennsylvania farmer who discovers a 500-foot design imprinted in his crops and seeks to learn its meaning. At issue are swirled, often circular designs pressed into crop fields, especially those of southern England. Most cereologists-a.k.a. Hoaxers, most croppies insisted, could not be responsible because the plants were only bent and not broken, and there were no footprints or other traces of human activity.