My Place for teachers 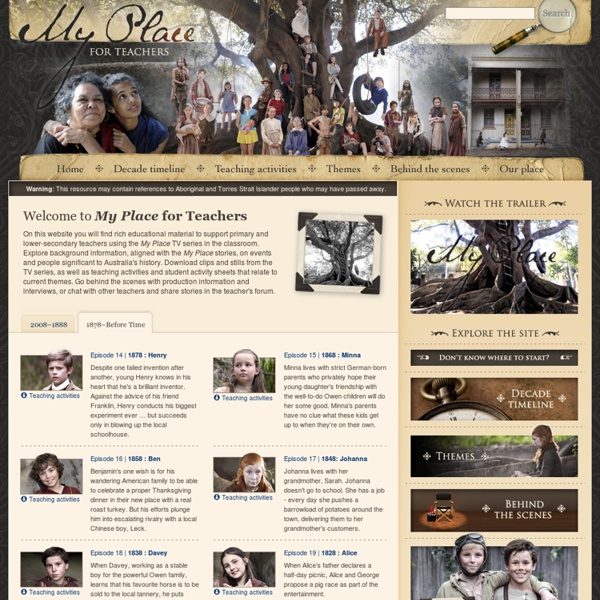 AESA School in the 1940s - History (1,2,3) - ABC Splash - Overview Imagine going to school in the 'olden days' (the 1940s). Find out what morning assembly looked like. Discover the things that children kept in their desks and what they used to do their writing. This clip shows you what school was like in the past as two adults (actors Terry Norris and Carmel Millhouse) remember what they did at school. Duration: 4 mins 28 secs Source : Thinkabout/Talkabout: When We Were Young Learning area: History Primary: Years 1, 2, 3 Before viewing Have you ever asked a grandparent what it was like for them at school? As you view What are the children carrying as they get off the bus? What things are the very young children doing at school? What were the holes for in the old school desks? What sort of pens did the students use? After viewing What things about school in the clip are different today? Talk to an older person about school. Next steps Make a comic strip or cartoon story about a day at school in the past. For teachers About this resource Acknowledgements

Mapping - Contour Education Education for Sustainability AESA Visit a restored 19th-century cottage - History Technologies (1,2,3,4) - ABC Splash - Overview Take a trip back in time to discover what some Australian homes looked like in the past. Visit an old miner's cottage that was built long ago. Duration: 1 min 38 secs Source : ABC For the Juniors Learning area: History , Technologies Primary: Years 1, 2, 3, 4 Before viewing Have you ever wondered what it would be like to grow up long before your grandparents were born? As you view What are the cottage walls made from? How was the cooking done in this kitchen, without electricity? How did the people who lived here long ago have a bath? Why is the toilet built away from the cottage? After viewing Pause the video to take a close look at the kitchen and living room. Imagine that you could talk to the people who first lived here. Next steps Keep a list of the things you use in one day that the people who first lived in this cottage did not have. Write or record a story about one day living in this cottage long ago. Transcript For teachers About this resource Acknowledgements Program:

Walking on Country With Spirits Located on the eastern shore of Australia’s tropical north, Shipton’s Flat is home to Marilyn, a Kuku Nyungkal Aboriginal woman, and her family. She has been living here the ancestral way — far removed from the services and conveniences of modern life. Like her ancestors before her, Marilyn walks through the Nyungkal bubu, the Nyungkal’s country, acknowledging and conversing with the spirit beings around her. She greets the spirit of the flowing stream that provides her family with freshwater, the spirits of her mother, father and grandparents that cared for the country before her, the spirits of her ancestors that have been formed into rocks, and the spirits of the trees and animal life around her that lend shade and sustenance. A change in the weather Marilyn has observed that the seasons are getting hotter. Marilyn feels that the “country is transforming, food is disappearing. What does it mean? “There will be nothing left because it is getting hotter,” Marilyn worries. What should we do?

Australian Sustainable Schools Initiative (AuSSI) Skip to main content Australian Sustainable Schools Initiative (AuSSI) About AuSSi The Australian Sustainable Schools Initiative (AuSSI) is a partnership of the Australian Government and the states and territories that seeks to support schools and their communities to become sustainable. AuSSI engages participants in a whole-of-school approach, to explore through real-life learning experiences, improvements in a school's management of resources and facilities including energy, waste, water, biodiversity, landscape design, products and materials. The Initiative's vision is for all Australian schools and their communities to be sustainable. News and events For news and information about AuSSI in your local area, please visit your state/territory AuSSI website. Become an AuSSI School How to register as an AuSSI school. Publications and resources Books and reports Evaluation reports Case studies Glossary Glossary and useful terms

Culture Victoria What is Eureka? and what happened there? In the early hours of 3 December 1854 a force of police and other troops charged a reinforced camp constructed by miners on the Eureka gold diggings. About 150 diggers were inside the stockade at the time of the attack. In the fighting, 4 soldiers and about 30 other people were killed, and another 120 people taken prisoner. Thirteen people from the stockade were charged with treason – these men were either tried and found not guilty, or charges against them were dropped. Many people think of the Eureka Stockade as a battle between the diggers (rebellious Irish fighting for democracy) and the police and colonial militia (the forces of the British Crown in the Colony). The Hated Gold Licences In 1854, people mining for gold around Victoria had to pay a monthly fee of 30 shillings for the right to mine, regardless of how much gold they found. The Unfair Treatment of Diggers by the Police and Justice System Demands for a Democratic Political System

Sea level rise in Kowanyama Qld “When that whole ocean comes and rises up, where are we going to go?” ponders Inherkowinginambana, a Kunjen elder from Kowanyama, a coastal Aboriginal community in tropical Queensland, Australia. “Every year it (the tide) comes in, it goes a bit further up….once it hits the swamps, that will kill all the plant life, and the waterways,” adds an Aboriginal ranger who works with local elders to protect Aboriginal country and culture. These tidal changes are not unique to Australia. Global climate change is increasing sea level worldwide. Historically, scientists have documented a wide fluctuation in sea level rise. So how does climatic warming lead to sea level change? Research has shown that thermal expansion of sea water is the leading contributor to sea level change. As the temperature increases, the ocean warms, causing water to expand and the sea level to rise; similar to what happens when bottled water is left out in the heat. The Kowanyama people Dreaming stories Links Kowanyama community