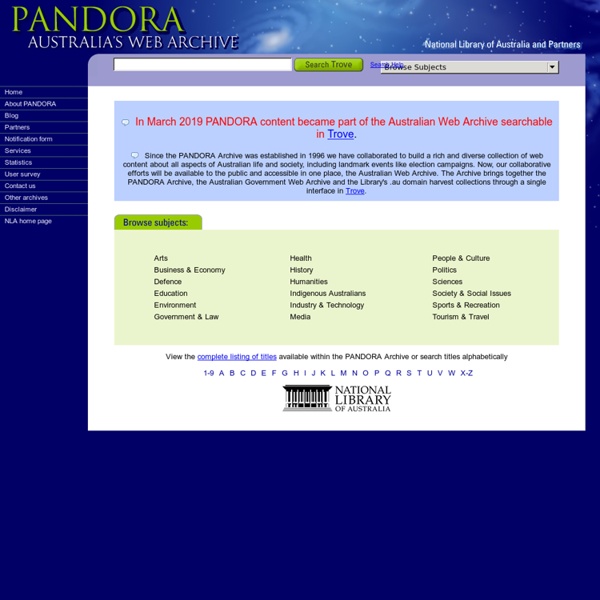 The Web-Archives Timeline, by WebArchivists CoraWeb Preserving the web evolution: AUSTRALIA’S PANDORA All over the world, major Libraries and other national organizations are responding to this challenge – the potential loss of information – by collecting, preserving and giving permanent access to key websites for future generations. PANDORA, Australia’s Web Archive, is a project by National Library of Australia in conjunction with nine other participant organizations from all over Australia’s States, and it is actually a selective archive of significant Australian online publications and web sites considered to be of long-term research value. It is based at the National Library of Australia in Canberra. The National Library aims to archive titles of national significance, while the State Libraries aim to archive those of State and regional significance. Actually, the possibilities for Web archiving are two: Anyone in the world with an Internet connection can have access to the PANDORA Archive, and the system is very user-friendly and simple to surf.

Department of Justice, Victoria Joining Pandora – Australia’s web archive The National Library of Australia aims to build a comprehensive collection of Australian publications to ensure that Australians have access to their documentary heritage now and in the future. The National Library is an amazing organisation. The theme promoted on the homepage says it all: Thinkers Wanted – Take a fresh look at the National Library. You should stop by and discover Australia’s Collections: Trove; Picture Australia, Pandora, Music Australia, Australia Dancing and Australian Newspapers. The one that I am excited about today is PANDORA – Australia’s Web Archive. PANDORA was set up by the Library in 1996 to enable the archiving and provision of long-term access to online Australian publications. Imagine my excitement to receive a request to include this blog in the PANDORA Archive. Access is then facilitated in two ways: via the Library’s online catalogue and via subject and title lists maintained on the PANDORA home page . I am delighted to be added to the collection!

Gould Genealogy: Australia Gen & Local Hist Store Internet Archive: Digital Library of Free Books, Movies, Music & Wayback Machine Australian Female Convict Database August 10, 2014 The female convicts are pronounced,……………………….. matter, to be the vainest of the vain daughters of Mother Eve. The dresses served out to the convicts are constant sources of annoyance to them, and many an hour is spent touching up and altering. At an English prison, some years since, a female convict was discovered to be in possession of three tallow candles, which, if they had not been missed, would no doubt have been utilised as pomade. Periodically the hinges of the cell-doors are oiled, and, strange as it may seem, convicts have been detected wiping the oil off and putting it on their hair. One woman created quite a sensation among the female convicts in Woking Prison by reason of the brilliancy of the color of her cheeks and lips, many of her fellow prisoners became most envious, and exercised every land of blandishment in order to induce the fortunate one to part with her secret—but in vain.

A Digital Asset Sustainability and Preservation Cost Bibliography Was this what those early NDIIPP meetings were like? Finheads & Parrotheads by user Windridgedoc on Flickr. Back in the early days of the NDIIPP program we had a series of cross-cutting initiatives that we called “affinity groups.” These groups addressed areas of interest such as “collection and selection,” “technical architecture” and “rights and restrictions” that cut across all the different projects. I was interested in the work of the “economic sustainability” working group, and for no particular reason I started compiling a bibliography of books and articles that related to the long-term preservation of digital information in some way, figuring that it would come in handy at some point. The bibliography ranges broadly, from articles on “contingent valuation,” “ecosystem valuation” and the general “costs” of knowledge, to those that directly address the cost issues associated with digital preservation and stewardship. Arrow, Kenneth, Robert Solow, Paul R. Barlow, John Perry.

Judy Webster: Queensland Resources | Libraries Are Essential Here are more things you can read to learn about various aspects of marketing & promotion. I’ve broken them down by topic instead of creating a straight alphabetical list. I’ll be adding to this list as I get time to write up more citations. Branding 4imprint (promo-product company). “Maintaining Your Brand.” company website. Definitions Finding Support for Marketing Ashcroft, Linda, 2002. Quotes Quotations about Libraries and Librarians from IFLA. Library Quotes from Brainy Quote Return on Investment Articles and Studies Related to Library Value (Return on Investment) is a great resource compiled by ALA. Social Media 4imprint (promo-product company). Stock Photos Librarians who design brochures, fliers, websites, posters, and other materials often need images to use. Many of today’s stock image sites allow you to design subscriptions where you can buy just a few images per year, or buy thousands. Most of these sites say their photos are “royalty-free.” Value of Libraries Web Marketing Strategies

The Ryerson Index Standalone mobile apps — Government Service Design Manual The government’s position on apps The government’s position is that native apps are currently rarely justified. At the October 2012 Digital Leaders meeting, the position was clarified: native apps could not be developed without Cabinet Office approval. The November 2012 Digital Strategy says: “Standalone mobile apps will only be considered once the core web service works well on mobile devices, and if specifically agreed with the Cabinet Office” Making sure your service meets the Digital by Default Service Standard means it will work well on mobile devices. Types of apps So-called ‘apps’ come in several different forms, which makes confusion understandable. device-specific ‘download and install’ apps (aka native apps) websites that respond to various screen sizes (aka responsive websites, web apps or HTML5) various combinations of the two Native apps Native apps are downloadable software applications that run using the device’s operating system code and APIs. Pros of native apps: Exceptions