Stay in the Kyoto Moyashi House: a 120-Year Old Renovated Machiya. Unless otherwise noted, all photos by Craig Mod | used with permission 120 years ago it was an indoor greenhouse for growing koji seeds, a key ingredient in sake as well as miso and soy sauce. 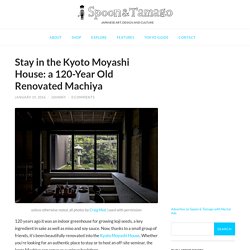 Now, thanks to a small group of friends, it’s been beautifully renovated into the Kyoto Moyashi House. Whether you’re looking for an authentic place to stay or to host an off-site seminar, the large Machiya can serve as a unique backdrop. the dining room at the back of the house looks out on one of the gardens The perfectly preserved details give you a sense of what life was like in late-1800s Japan. You’ll also find some of the original structures and fittings that were used to grow the koji seeds. A central courtyard divides the dining room and itama while also allowing natural light into the kitchen. Designer Dream Bath Competition Winners Announced. A prize of $10,000 worth of Duravit product was at stake for the company’s third annual Designer Dream Bath competition, which invites architects and designers to reimagine their own baths outfitted with Duravit’s new products. 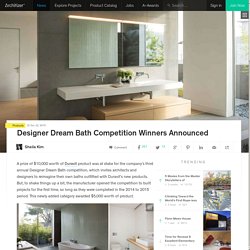 But, to shake things up a bit, the manufacturer opened the competition to built projects for the first time, so long as they were completed in the 2014 to 2015 period. This newly added category awarded $5,000 worth of product. Add To Collection Save this image to a collection Built project winner:Intexure. Winning the inaugural built project prize was Intexure for a house in Houston. Built project winner: Intexure. “Intexure used Duravit products in ways we’ve never seen before,” said Tim Schroeder, president of Duravit USA. Unbuilt category winner: Mark Mangapora. 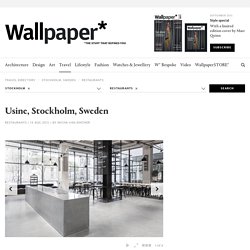 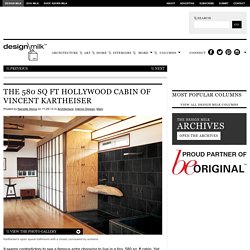 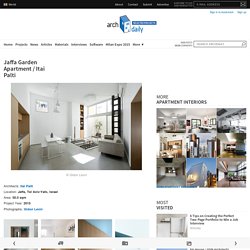 The space began as mish-mash of small rooms and corridors – the result of years of informal additions and alterations to the building. Pear Tree House by Edgley Design sits on the site of a Victorian orchard. A home designed to connect both with its current urban surroundings, as well as the site's historical past, Pear Tree House by Edgley Design is tucked away in a tree-filled backland in leafy South London. 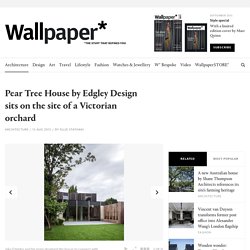 Its 100-year-old namesake grows on site from the time when this part of Dulwich used to be a Victorian fruit orchard - this was key to director Jake Edgley's design strategy. 'The tree by its location forced me to split the house in two, but this created an internal courtyard that brings light and air into the centre of the plan, and a natural sculpture which is part of the daily experience of the ground floor,' he says. The house - the architect's own family home - was built around the mature tree, the courtyard flanked by two volumes on the long plot's narrow ends. Low-cost luxe: bedding down in affordable designer accommodation. Studio Puisto's Dream Hotel extends former warehouse hostel. Helsinki-based Studio Puisto used hanging basket seats, strips of timber and potted plants for the interior of this 20-room hotel in Tampere, Finland (+ slideshow). 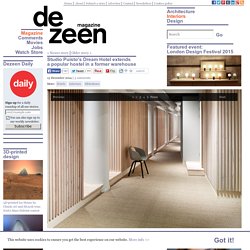 Located within a converted industrial building, the Dream Hotel was designed by Studio Puisto to accompany the pre-existing Dream Hostel in the same building, offering an additional 20 boutique suites with en suite bathrooms. The architects designed the rooms to be fairly basic to keep costs low, focusing on creating private sleeping space. Seating is provided in the hallways, which are designed to act as communal living spaces. 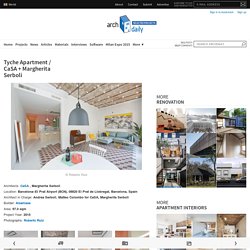 The property occupies an art nouveau building of the Eixample district of Barcelona and was fully renovated by CaSA and Margherita Serboli to become the holiday apartment for an Italian family. The original layout wasted considerable space and was poorly orientated. Travel Directory - Torafuku - Vancouver, Canada. Travel Directory - New York, USA. Travel Directory - The Serras - Barcelona, Spain. Creative enclave: Caro Somerset brings contemporary design to the country. The picturesque but unassuming town of Bruton in Somerset has been busy putting itself on the map in recent years. 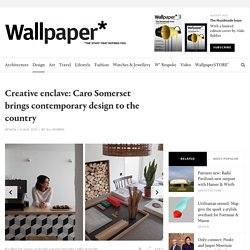 In a converted chapel, set on the town's archaic main street, the suitably named At the Chapel eatery has been attracting out-of-towners with its acclaimed restaurant, bar, artisan bakery and wine shop since opening in 2008, and more recently with its eight stylishly-appointed guest rooms. Then last year, when international gallery Hauser & Wirth rolled into town, commandeering a 17th century farm as its rural outpost, this formerly sleepy West Country town cemented its status as a creative enclave. As of last month, Bruton now has its very own design store to add to this growing list of amenities. Width heght0stockholmflat1. Luxurious residence in minimalist interior design. Travel Directory - The Arthur J. - Manhattan Beach, USA. House T. by Campbell Architecture. House T. is a minimalist house located in Sydney, Australia, designed by Luigi Rosselli Architects. 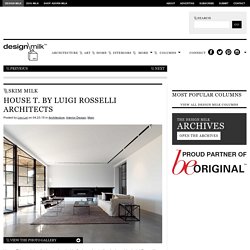 The project brief was to create a spacious estate with a focus on entertaining and family living. Start fascia tebriz concrete 60. 5 Great Modern Cozy Reading Nooks. Just because your space is super small doesn’t mean you can’t carve out a cozy little nook for yourself that you can curl up and read a good book in. Whether it’s under the stairs, in an attic, or built within a window, there are plenty of options to give you that comfy space you’re looking for.

Sit back and gaze at five of our favorites… Built within the Mapledene Road house, designed by Platform 5 Architects, a glass box juts out from the structure creating a dreamy, sun-filled window seat for you to get your read on. Koya No Sumika / mA-style Architects. Architects: mA-style Architects Location: Yaizu, Shizuoka Prefecture, Japan Architect In Charge: Atsushi Kawamoto, Mayumi Kawamoto Area: 778.0 sqm Project Year: 2013 Photographs: Kai Nakamura This is an extension plan for a young couple's house next to the main house. The main house is a one story Japanese style house with about 200m2, which is commonly seen in rural areas. It is a big house with many rooms and mainly consists of large spaces for people to gather and to provide hospitality. However, the young couple desired feelings of ease and spaces that ensure quiet and comfortable times. A simple extension may enable each of the house's residents to live completely separated, but the relationship between the families and the connection with the main house might be lost.

Black and White Apartment / Crosby Studios. Architects: Crosby Studios Location: Leningradskiy prospekt, Moskva, Russia Architect In Charge: Harry Nuriev, Dmitry Vorontsov, Olga Boris Area: 64.0 sqm Project Year: 2015 Photographs: Evgeny Evgrafov From the architect. This two-bedroom apartment for a young couple is located in a building constructed in 1900, near the centre of Moscow. The apartment is on the sunny side and has sunshine all day, dawn to dusk. The owners and the Crosby Studios architecture bureau had similar tastes. They decided to make it into a Brooklyn style studio, not too motley, with clean forms and black and white elements. Travel Directory - Casa Modesta - Algarve, Portugal. Travel Directory - Bistro Proti Proudu - Prague, Czech Republic.

With an ever-growing number of cool cafés, wine bars and shops, Prague’s Karlín district is fast becoming a haven for the hip set. Its latest arrival, is Bistro Proti, a cosy corner eatery with a sleek interior inspired by the neighbourhood’s most significant historical figure, engineer František Križík. The restaurant is a twenty-year long dream come true for journalist husband and wife team David and Karolina Konecný, who tasked local atelier Mimosa and architecture firm Modulora to outfit the space. As such, the stark white room is defined by a series of black cables which – embellishing the wall behind the Corten steel counter – are functionally attached to the restaurant’s pendant lighting fixtures, while forming a visual grid-like pattern.

Clean oak furnishings and marble floors are elegant additions to an otherwise industrial space, which serves an all-day breakfast menu along with light additions such as soups, sandwiches and home made desserts. Healing art: a spiritual journey with Ernesto Neto and the Huni Kuin tribe at Vienna's TBA21. Following the release of the illustrated Livro da Cura ('Book of Healing') by the Rio de Janeiro Botanical Garden Research Institute in 2014, Brazilian artist Ernesto Neto journeyed into the Amazonian jungle to learn from the Huni Kuin tribe, whose plant knowledge and medicine practice the compendium is based on.

The Dean 10. The Dean 4. The Dean 1. The Dean 12. The Dean 5. A Master Suite Designed for Privacy and Intimacy. Casa Cor Rio de Janeiro is a prestigious national interior design event that takes place every year and Brazilian architect Gisele Taranto designed this cozy master suite for this year’s event. Each architect is given a different section of an unused apartment to renovate and Taranto was given the master suite. The suite was created with a couple in mind that was interested in intimacy and privacy. Space Saving Furniture. Barcelona apartment refurb by Nook. Keperra House built around a sheltered deck by A-CH. Adjustable Bed Compact House. L’acteur américain Vincent Kartheiser, connu pour son rôle dans la série Mad Men, a demandé au designer Funn Roberts de repenser l’intérieur de son appartement.