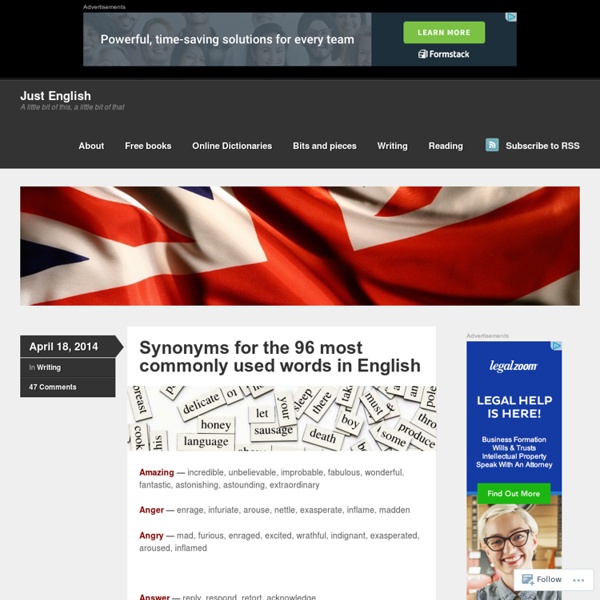 Everything's a Copy, But You Should Still Embrace Your Voice Whatever your creative goal – be it to pen a Pulitzer prize winning novel, shoot an Oscar winning movie, or paint a masterpiece – it’s important to remember that you are constantly surrounded by outside influences. You read, you watch movies, and you examine art. Each of these mediums, with their wide variety of style and voice, influence your life and your creativity. Types of Reasoning Disciplines > Argument > Types of Reasoning Reasoning within an argument gives the rationale behind why one choice, for example should be selected over another. Types of reasoning include: Abduction: the process of creating explanatory hypotheses. Backwards Reasoning: Start from what you want and work back. Butterfly Logic: How people often argue.

pansypanda Sometimes the way you act will have an effect on people in an subconscious. You may not even realize that you are causing causing this effect. Hare are 16 mental life hacks that may cause people to feel a certain way or do something. It may help you in the future. Check them out. These are kind of cool.

Astronomy Answers: Coincidence Periods Loading [MathJax]/jax/output/CommonHTML/fonts/TeX/fontdata.js 1. Introduction At least 2500 years ago astronomers in Babylon discovered that solareclipses and lunar eclipses often recur under similar circumstances after 223 synodical months (counted according to the phases of the Moon, not according to the western calendar) or about 6585⅓ days. This period is nowadays called the saros. We call a series of eclipses that each occur one saros after the previous one a saros series.

www.highexistence Recently I came across this amazing little Tumblr named ‘OtherWordly‘ – itself a play on words. It consists of a collection of strange and lovely words from different languages through different times. What I like most about this selection of consonants and vowels – little meaning-carrying packages of vibration – is that they all try to point to the unspeakable, the transient or the neglected. That which we forget in the busyness of our daily grind. Words have the power to remind us – and therefore we should choose our words carefully so we are reminded of the things that nourish our souls. Godwin's law Mike Godwin (2010) Godwin's law (or Godwin's Rule of Nazi Analogies)[1][2] is an Internet adage asserting that "As an online discussion grows longer, the probability of a comparison involving Nazis or Hitler approaches 1" [2][3]—​ that is, if an online discussion (regardless of topic or scope) goes on long enough, sooner or later someone will compare someone or something to Hitler or Nazism. Promulgated by American attorney and author Mike Godwin in 1990,[2] Godwin's Law originally referred, specifically, to Usenet newsgroup discussions.[4] It is now applied to any threaded online discussion, such as Internet forums, chat rooms and blog comment threads, as well as to speeches, articles and other rhetoric.[5][6] In 2012, "Godwin's Law" became an entry in the third edition of the Oxford English Dictionary.[7] Corollaries and usage[edit]

Poe's law Confusion of parody and sincere expression Poe's law is an adage of Internet culture stating that, without a clear indicator of the author's intent, it is impossible to create a parody of extreme views so obviously exaggerated that it cannot be mistaken by some readers for a sincere expression of the views being parodied.[1][2][3] The original statement, by Nathan Poe, read:[1] Without a winking smiley or other blatant display of humor, it is utterly impossible to parody a Creationist in such a way that someone won't mistake for the genuine article. Origin[edit] www.japan-talk posted by John Spacey, Japan Talk, March 12, 2014 There are Japanese words that help you speak. There are other words that help you to understand Japanese culture — the way that Japanese people think. These 7 words are critical to understanding Japanese culture: 1.

What are the healthiest sleeping positions? We all know how important the right posture is for your health throughout the day. But did you know that this doesn't stop once you close your eyes at night? Which sleeping positions are best?