How to Learn (But Not Master) Any Language in 1 Hour (Plus: A Favor) 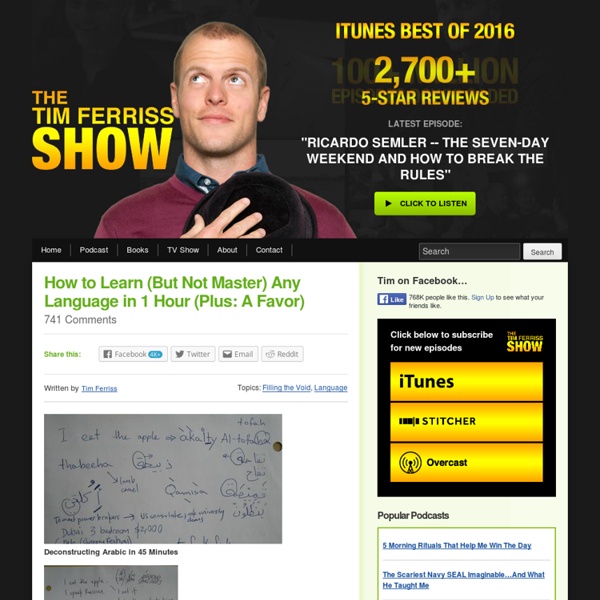 Deconstructing Arabic in 45 Minutes Conversational Russian in 60 minutes? This post is by request. How long does it take to learn Chinese or Japanese vs. Spanish or Irish Gaelic? Here’s the reasoning… Before you invest (or waste) hundreds and thousands of hours on a language, you should deconstruct it. So far, I’ve deconstructed Japanese, Mandarin Chinese, Spanish, Italian, Brazilian Portuguese, German, Norwegian, Irish Gaelic, Korean, and perhaps a dozen others. How is it possible to become conversationally fluent in one of these languages in 2-12 months? Consider a new language like a new sport. There are certain physical prerequisites (height is an advantage in basketball), rules (a runner must touch the bases in baseball), and so on that determine if you can become proficient at all, and—if so—how long it will take. Languages are no different. Six Lines of Gold Here are a few questions that I apply from the outset. 2. 3. 4. It doesn’t take much to answer these questions.

Language-Learning Software and Online Courses | Transparent Language 12 Rules for Learning Foreign Languages in Record Time — The Only Post You’ll Ever Need Preface by Tim Ferriss I’ve written about how I learned to speak, read, and write Japanese, Mandarin, and Spanish. I’ve also covered my experiments with German, Indonesian, Arabic, Norwegian, Turkish, and perhaps a dozen others. There are only few language learners who dazzle me, and Benny Lewis is one of them. This definitive guest post by Benny will teach you: How to speak your target language today.How to reach fluency and exceed it within a few months.How to pass yourself off as a native speaker.And finally, how to tackle multiple languages to become a “polyglot”—all within a few years, perhaps as little as 1-2. It contains TONS of amazing resources I never even knew existed, including the best free apps and websites for becoming fluent in record time. This is a post you all requested, so I hope you enjoy it! Enter Benny You are either born with the language-learning gene, or you aren’t. I think you can stack the deck in your favor. So, let’s get started! Here’s what I suggest instead:

Learning English - Home A Base Vocabulary List for Any Language Your Base Vocabulary: The first ~625 words [Author's note: Behold, the new, improved list:] Check these out at the Word Lists page! Your Base Vocabulary: Your first 625 words This is a new, improved version of an older list of 400 words. I’ve culled this list from the General Service List and Wordfrequency.info - two well-made frequency lists for English. I’ve also begun a project to get this list professionally translated into a bunch of languages. How to use this list: Pronunciation (in general): Learn your pronunciation rules. The List(s) A quick note about order I’m providing this list in two formats: a thematic list and an alphabetical list. The thematic list is friendly: you’ll see lists of animals, types of clothing, professions, etc. Thematic lists are nice ways to organize words, but I’m going to suggest that you avoid them when you actually sit down to learn your words, and use an alphabetical list instead. Order is important. Your First 625 Words (in Thematic Order, with notes):

EnglishClub Online Etymology Dictionary Speech GraphicsSpeech Graphics creates world’s first high fidelity animation of human speech organs » Speech Graphics Oct 14 '13 Author: Speech Graphics Posted in: Press Specialist audio animation studio, Speech Graphics, announced today the launch of the world's first high fidelity animation of the human speech organs. Communication in today's global economy is critical and for the approximately 2 billion people learning English as a second language, accent and pronunciation are two of the most difficult aspects to master. Gregor Hofer of Speech Graphics explains: "A strong accent can be a major barrier to effective communication. Revealing a hidden world never seen so clearly before, Simone is a fully functioning cutaway of the inside of the mouth, nose and throat. Viewed from the front, Simone's face moves in perfect synchrony with audio recordings of sounds and words. Saundz.com provided a learning curriculum and graphical web interface around the Speech Graphics animation.

Endangered Languages Library Delivering Bad News - Communication Skills Training From MindTools.com Communicating Well Under Pressure Deliver bad news with honesty and empathy. © iStockphoto/Yuri_Arcurs Jack's boss has just told him that, due to budget cuts, several people in his team will have to go. Jack manages a happy, successful, team, and he has no idea how to deliver this bad news. It's possible that you've experienced a similar situation, or will have to face one like it in the future. By learning how to deliver bad news honestly, openly, and empathetically, you can help to preserve your working relationships, rather than damage them. In this article, we'll look at the best approaches to use when delivering a difficult message. The Art of Delivery Delivering bad news is something that we all have to do at some point. There are many reasons why you might need to deliver bad news, which is why it's important to know how to deliver it honestly, empathetically, and gracefully. Lessons From the Medical Field Much of the research on delivering bad news comes from medicine. 1. 2. 3. 4. 5.

BBC Languages – Free online lessons to learn and study with