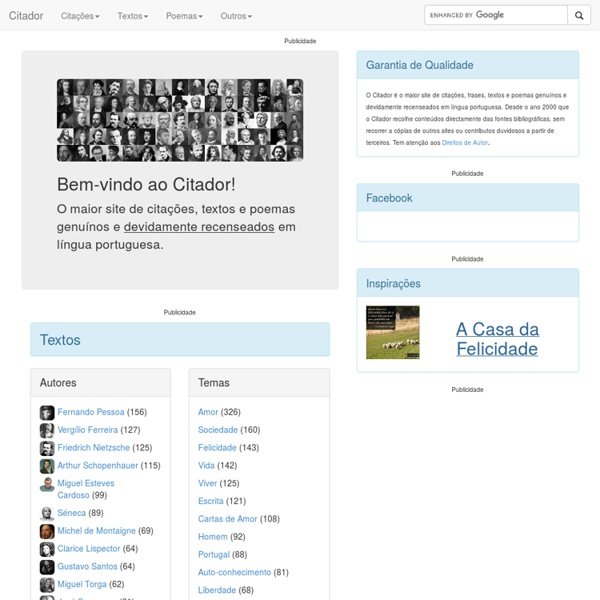 These DIY Eco-Friendly "Air Conditioners" Are Cooling Down Bangladesh Out in the sticks of Bangladesh, the threat of flooding means that 70 percent of the population live in corrugated tin huts, most of which aren’t hooked up to an electricity supply. In the heat of the summer, this can practically turn these houses into ovens. However, a project called Eco-Cooler is spreading knowledge of a cheap and electricity-free method to cool down houses throughout Bangladesh. The beauty of the project is it needs little more than a few plastic bottles and a board. It was started through a collaboration between advertising agency Grey Dhaka and Grameen Intel Social Business Ltd. Here’s how it works: Plastic bottles are cut in half and then mounted into a grid through bottleneck-sized holes.

Philosophy Philosophy is the study of general and fundamental problems concerning matters such as existence, knowledge, values, reason, mind, and language.[1][2] The Ancient Greek word philosophia was probably coined by Pythagoras[3] and literally means "love of wisdom".[4][5][6][7][8] In the 19th century, philosophy became more professionalized as it began to be studied and taught in modern research universities.[13][14] Contemporary academic philosophers subdivide research areas in various ways. For example, topical divisions include major branches such as epistemology, logic, metaphysics, ethics, aesthetics, and other specialized branches. Other ways of dividing include historical period (e.g., ancient and modern); thinker (e.g., Platonism, Confucianism, Kantianism); or philosophical tradition (e.g., analytic or Continental). Many of these recurring questions are still debated in philosophy and other fields today.

Fisher's exact test of independence - Handbook of Biological Statistics Summary Use the Fisher's exact test of independence when you have two nominal variables and you want to see whether the proportions of one variable are different depending on the value of the other variable. Use it when the sample size is small. When to use it Use Fisher's exact test when you have two nominal variables. Leaf Is A “Plug N’ Plant” Box To Automatically Grow Pot In Your Home Marijuana is a sticky subject. Twenty-three states (and D.C) have legalized some form of medical use, but possession, growth and distribution are still illegal in the majority of the United States. However, as is the case with most new industries, slow regulation hasn’t stopped innovation. Leaf, a TechCrunch Disrupt SF 2015 Battlefield company, is leading the revolution with its automated “Plug N’ Plant” home growing system. Leaf’s device is a 4′ x 2′ box that will fit two plants, which will yield between 4-5 ounces of weed. However, Leaf is much more than just a mini grow house.

Take College And University Courses Online Completely Free In recent years massive open online courses (MOOCs) have become a trend in online education. The term was coined in 2008 by David Cormier, manager of web communications and innovations at the University of Prince Edward Island. The first MOOC was created the previous year, at Utah State University. Today, there are hundreds of thousands of courses available online at no cost. You can study anything from business to zoology in your own home at no cost. MOOCs are designed like college courses but are available to anyone anywhere in the world, at no cost.

About The third is community. We believe learning should be as rich and varied as the world you're learning about. So with our community we're building a kind of multimedia wonderland of learning, where videos, audio, usage, mnemonics, etymologies and much more bring your learning to life. We believe that every learner is partly a teacher, and we hope that once you get started, you'll soon be supplying little nuggets of wit and wisdom to help the rest of the community as they learn! Anyone can learn anything

Elusive acid finally created After more than a century of searching, chemists have finally nabbed a legendary acid. The acid called cyanoform or tricyanomethane appears widely in textbooks as one of the strongest carbon-based acids known. Yet despite attempts to make the acid dating back to 1896, cyanoform has evaded chemists until now. Researchers report September 18 in Angewandte Chemie International Edition that they isolated the acid by figuring out crucial experimental conditions. The main problem was temperature, says coauthor Andreas Kornath, an inorganic chemist at Ludwig Maximilian University of Munich.

GRE Computer-delivered General Test Content and Structure (For Test Takers) The overall testing time for the computer-delivered GRE® General Test is about three hours and 45 minutes. There are six sections with a 10-minute break following the third section. Structure of the Computer-delivered Test The Analytical Writing section will always be first. The Verbal Reasoning, Quantitative Reasoning and unidentified/unscored sections may appear in any order; therefore, you should treat each section as if it counts toward your score.

TOEFL ITP Assessments: Test Content A Reliable Assessment of English The TOEFL ITP® tests are paper-based and use academic and social content to evaluate the English-language proficiency of nonnative English speakers, giving you confidence about your students' ability in a real-world academic setting. All questions are multiple choice and students answer questions by filling in an answer sheet. How to Make Difficult Conversations Easy: 7 Steps From a Clinical Psychologist Someone is screaming in your face at the top of their lungs. Or ranting angrily and you can’t get a word in edgewise. Or maybe they’re sobbing so hard you can barely understand what they’re saying.

Aquaculture Solaiman Sheik shows off the harvest from his father’s small pond near Khulna, Bangladesh: freshwater prawns, a profitable export. The family also raises fish in the pond and, in the dry season, rice fertilized by fish waste—a polyculture that has tripled output with little environmental downside. Photograph by Jim Richardson In a dark, dank warehouse in the Blue Ridge foothills of Virginia, Bill Martin picks up a bucket of brown pellets and slings them into a long concrete tank.