The Lesson You Never Got Taught in School: How to Learn! 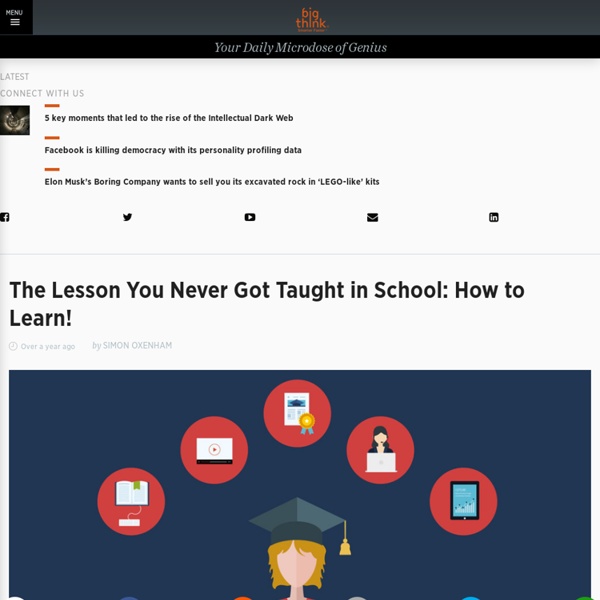 A paper published in Psychological Science in the Public Interest evaluated ten techniques for improving learning, ranging from mnemonics to highlighting and came to some surprising conclusions. The report is quite a heavy document so I’ve summarised the techniques below based on the conclusions of the report regarding effectiveness of each technique. Be aware that everyone thinks they have their own style of learning (they don't, according to the latest research), and the evidence suggests that just because a technique works or does not work for other people does not necessarily mean it will or won’t work well for you. If you want to know how to revise or learn most effectively you will still want to experiment on yourself a little with each technique before writing any of them off. Elaborative Interrogation (Rating = moderate) A method involving creating explanations for why stated facts are true. An example of elaborative interrogation for the above paragraph could be: Reference:

Teaching Web Literacy... In 1998, a 15-year-old high school student used the personal website of a professor at Northwestern University, Arthur Butz, as justification for writing a history paper called “The Historic Myth of Concentration Camps.” That student, who we will call Zack, had been encouraged to use the internet for research, but he had not been taught to decode the meaning of the characters in a Web address. When he read the Web address, he assumed that the domain name “northwestern.edu” automatically meant it was a credible source. He did not understand that the “~” character, inserted after the domain name, should be read as a personal Web page and not an official document of the university. As with any media, punctuation counts. Without Web literacy, Zack believed Butz’s explanation.

End of nations: Is there an alternative to countries? Map: Norman Kirby; Photograph: Tatsuro Nishimura By Debora MacKenzie Try, for a moment, to envisage a world without countries. Imagine a map not divided into neat, coloured patches, each with clear borders, governments, laws. Try to describe anything our society does – trade, travel, science, sport, maintaining peace and security – without mentioning countries. How To Learn More Outside Of Class Than You Ever Could Inside It I’m going to give you a list of seemingly random things, and I want to you try and guess how they’re related. Ready? Here we go: Automatic Reference Counting (ARC) is a feature in iOS 5 that allows the compiler to do memory management automatically, so you don’t have to.Out of all high school students that graduate in the bottom 40 percent of their class, 76 percent will not will not have a college degree within eight years.しんぶんでしたか？

Study: Religious and Superstitious People Struggle to Understand the Physical World People who believe in God or the supernatural don’t quite understand the physical world, claims a new study from researchers at the University of Helsinki. The Finnish scientists also concluded that not only did they not understand nature and the biological world clearly, religious people tended to anthropomorphize, ascribing human qualities like feelings to inanimate objects such as rocks, wind and the like. They would agree with statements like "stones sense the cold". The 30 Second Habit That Can Have a Big Impact On Your Life There are no quick fixes. I know this as a social science junkie, who’s read endless books and blogs on the subject, and tried out much of the advice — mostly to no avail. So I do not entitle this post lightly.

INTENSE STUDY TIPS Boy oh boy.... I'm going to attempt to get all of my study tips from the past and present into this post. I've been getting emails/tweets/questions asking for my secrets. Before starting... there are a few "ground rules" I will lay out. I don't have tips on how to be more motivated. For me, there's a set, clear list of things I have to do and there is a specifically defined time to doing them. It's Time to Revolutionize Education — The Mission — Medium The world has radically changed in the last two centuries, yet the way schools prepare our children has remained largely static. It is still modeled on the needs of the industrial age. When you look at today's school, it is still pretty much organized like an assembly line: ringing bells, separate classrooms for each subject, unidirectional transference of knowledge, learning by age group.

Memories of errors foster faster learning Using a deceptively simple set of experiments, researchers at Johns Hopkins have learned why people learn an identical or similar task faster the second, third and subsequent time around. The reason: They are aided not only by memories of how to perform the task, but also by memories of the errors made the first time. "In learning a new motor task, there appear to be two processes happening at once," says Reza Shadmehr, Ph.D., a professor in the Department of Biomedical Engineering at the Johns Hopkins University School of Medicine. "One is the learning of the motor commands in the task, and the other is critiquing the learning, much the way a 'coach' behaves. Object moved While You Were Sleeping Everybody knows that rest is good for the body, and over the years, researchers have found evidence that sleep is good for learning and memory, too. The first reports of sleep’s positive effect on memory date back to 1924, when researchers taught people nonsense syllables and tested them hours later. Subjects who got some shut-eye before testing were better at remembering than those who had stayed awake.

Books.Blog – Skip Graduate School, Save $32,000, Do This Instead Three years ago, I invested $32,000 and the better part of two years at the University of Washington for a master's degree in International Studies. The verdict? It wasn't a complete waste of time and money. Once I accepted that 80% of the course requirements were designed to keep people busy, I enjoyed the other 20% of the work.

You Should Work Less Hours—Darwin Did When you examine the lives of history’s most creative figures, you are immediately confronted with a paradox: They organize their lives around their work, but not their days. Figures as different as Charles Dickens, Henri Poincaré, and Ingmar Bergman, working in disparate fields in different times, all shared a passion for their work, a terrific ambition to succeed, and an almost superhuman capacity to focus. Yet when you look closely at their daily lives, they only spent a few hours a day doing what we would recognize as their most important work. The rest of the time, they were hiking mountains, taking naps, going on walks with friends, or just sitting and thinking.

The Power of the Doodle: Improve Your Focus and Memory Long dismissed as a waste of time, doodling is getting new respect. Recent research in neuroscience, psychology and design shows that doodling can help people stay focused, grasp new concepts and retain information. A blank page also can serve as an extended playing field for the brain, allowing people to revise and improve on creative thoughts and ideas. Doodles are spontaneous marks that can take many forms, from abstract patterns or designs to images of objects, landscapes, people or faces. Some people doodle by retracing words or letters, but doodling doesn't include note-taking. "It's a thinking tool," says Sunni Brown, an Austin, Texas, author of a new book, "The Doodle Revolution."

Related:  brain&mind • How to Learn • Matérias
Related:  Education System   -  Miscellaneous   -  Module 3 : mémoriser   -  Carl Jung speaks about Death - YouTube   -  Bill Hicks - It's Just A Ride - YouTube   -  Terence Mckenna - Schizophrenic or Shamanic? - YouTube   -  How to Learn More and Study Less : zenhabits   -  Fair Trade USA | Every Purchase Matters   -  10 Reasons You Should Never Get a Job   -  The Power of Habit and How to Rewire Our “Habit Loops” | Brain Pickings   -  Quicklyst - take better notes.   -  Against Positive Thinking: Uncertainty as the Secret of Happiness | Brain Pickings   -  What Do Emotions Have to Do with Learning? | MindShift   -  10 Reasons Why Oxytocin Is The Most Amazing Molecule In The World   -  Rewire Your Brain for Positivity and Happiness Using the Tetris Effect   -  22 Things Happy People Do Differently | Successify!   -  Diigo - Better reading and research with annotation, highlighter, sticky notes, archiving, bookmarking & more.   -  The Wim Hof Method *Revealed* - How to Consciously Control Your Immune System   -  The Gnostic World View: A Brief Summary of Gnosticism   -  Spirituality and Parenting, Artof4elements Interview with Nuit - YouTube   -  The Terrifying Future of The United States - YouTube   -  8 Easy Bodily Actions That Transform Mental Performance — PsyBlog   -  How Negative Energy Affects Your Life and How to Clear It   -  Good and Bad Habits of Smart People   -  10 Simple Ways to Raise Your Level of Conscious Awareness » Zazen Life Zazen Life   -  27 Simple Ways To Check For Understanding   -  ASPCA | American Society for the Prevention of Cruelty to Animals   -  Programming Your Brain: The Art of Learning in Three Steps | BitNative by Cory House   -  100 Ways To Become More Conscious: How To Raise Your Consciousness | The Mind Unleashed   -  MintLife Blog | Personal Finance News & Advice | Top 10 Things That Determine Happiness