Against Positive Thinking: Uncertainty as the Secret of Happiness 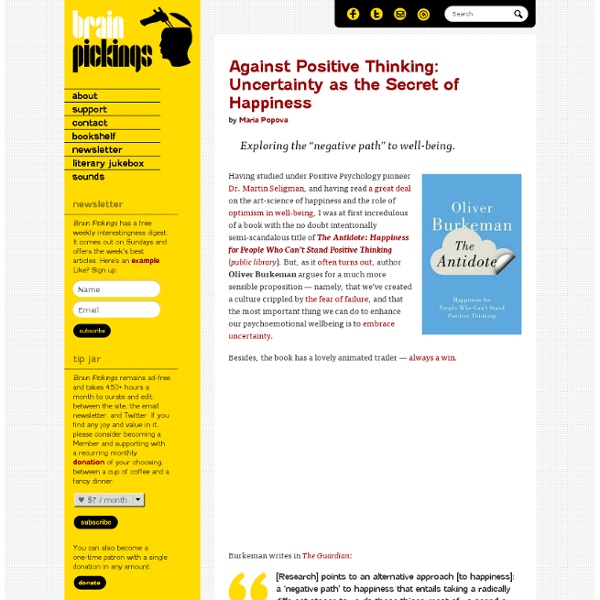 Being Lonely May Be A Hazard To Your Health Photo by J. Bruce Baumann Being alone doesn’t just feel bad. It’s bad for you — especially if you’re older. In the second study, which was conducted at the University of California, San Francisco, scientists studied information from the Health and Retirement Study. “In our typical medical model, we don’t think of subjective feelings as affecting health,” said Dr. It also underscores the importance of maintaining social ties as we get older. For all the latest science news, check out the National Geographic’s twice-weekly news rundown, EarthCurrent.

New study says friends the key to childrens' happiness The Queensland University of Technology has found that between the ages of nine and 14, a good friend is the key to a child's happiness. Source: Supplied FRIENDS are the key to kids' happiness, trumping families and toys as a source of joy, new research reveals. Girls are more cheerful than boys - but happiness starts to dive from the age of nine, when children become as miserable as the elderly and sick. Unhappiness among tweenagers has become so acute that schools are resorting to classroom psychotherapy to help students look on the bright side. Students are being taught "gratitude, hope and serenity", in American-inspired programs used by some of the nation's top private schools - including Geelong and Sydneys Knox grammar schools - and spreading within the public system. Behavioural economists Tony Beatton and Paul Frijters, from the Queensland University of Technology, have found that extroverted and conscientious children are the happiest.

Publication of flu study reveals full nature of threat - health - 21 June 2012 It's one of the most troubled scientific gestations on record. Nine months after it was first presented at a conference, research showing that just five mutations lead to a deadly H5N1 bird flu which transmits through the air between mammals has finally been published. Estimates published with it show that nature might well produce this virus too – and reveal the science we now need to head off that threat. The research, by Ron Fouchier and colleagues at Erasmus Medical Centre in Rotterdam, the Netherlands, was presented at a meeting and reported by New Scientist last September. The main benefit was that it alerts us to some of the warning signs that might suggest one of the vast number of H5N1 viruses circulating in birds could become a pandemic. Each lab did different things to H5N1 to make it transmissible. For one thing, you need to change the HA surface protein so it binds a cell-surface sugar in mammals' noses, instead of the one it binds in birds. Beyond the lab More from the web

H5N1 Bird Flu Research That Stoked Fears Is Published The paper, by scientists at Erasmus Medical Center in the Netherlands, identified five mutations apparently necessary to make the bird flu virus spread easily among ferrets, which catch the same flus that humans do. Only about 600 humans are known to have caught H5N1 in the last decade as it circulated in poultry and wild birds, mostly in Asia and Egypt, but more than half died of it. The paper’s publication, in the journal Science, ended an acrimonious debate over whether such results should ever be released. Critics said they could help a rogue scientist create a superweapon. Proponents said the world needed to identify dangerous mutations so countermeasures could be designed. “There is always a risk,” Dr. Two of the five mutations are already common in the H5N1 virus in the wild, said Ron A. The Dutch team artificially introduced three mutations. Four changes were in the hemagglutinin “spike” that attaches the virus to cells. As the virus became more contagious, it lost lethality. Dr.

Intrinsic Motivation Doesn't Exist, Researcher Says COLUMBUS , Ohio – While some psychologists still argue that people perform better when they do something because they want to – rather than for some kind of reward, such as money -- Steven Reiss suggests we shouldn't even make that distinction. Reiss, a professor of psychology at Ohio State University , argues that a diverse range of human motivations can't be forced into these categories of intrinsic and extrinsic motivations. Psychologists say intrinsic motivations are those that arise from within – doing something because you want to – while extrinsic motivations mean people are seeking a reward, such as money, a good grade in class, or a trophy at a sporting event. “They are taking many diverse human needs and motivations, putting them into just two categories, and then saying one type of motivation is better than another,” said Reiss, who outlines his argument in the current issue of the journal Behavior Analyst. “But there is no real evidence that intrinsic motivation even exists.”

Q&A: Happiest Baby Author, Dr. Harvey Karp, on Getting Your Baby to Sleep Like, Well, a Baby Parents wonder about lots of things — when to start solid foods, how to soothe their babies, when to ditch diapers and tackle potty training. But the biggest bugaboo, speaking from personal experience, is sleep. How much do babies need? And why don’t they seem to be getting it? On Thursday night, in more than 500 movie theaters across the country, from Union Square Stadium 14 in New York City to AMC Century City 15 in Los Angeles, Dr. Karp, author of the best-selling The Happiest Baby on the Block and its sequel, The Happiest Toddler on the Block, has a new addition to his pediatric pantheon. “It’s kind of like a house call to the nation,” says Karp. (MORE: A History of Kids and Sleep: Why They Never Get Enough) The event, sponsored by BabyCenter, SwaddleDesigns and NCM Fathom Event, will feature a live screening of Karp doling out doctorly advice, which will then be broadcast to these theaters. Since his first book came out a decade ago, he’s cobbled together an empire of products.

THE FOUR INTRINSIC REWARDS THAT DRIVE EMPLOYEE ENGAGEMENT Motivational dynamics have changed dramatically to reflect new work requirements and changed worker expectations. One of the biggest changes has been the rise in importance of psychic, or intrinsic rewards, and the decline of material or extrinsic rewards. This author draws upon recent research to explain the popularity of intrinsic rewards and how these rewards can be used to build a high-engagement culture. I have been researching workplace motivation for about 30 years and I’m amazed at how much has changed recently. Most of the motivational models used today were developed in earlier eras, when work and workers were different. Extrinsic and intrinsic rewards Extrinsic rewards—usually financial—are the tangible rewards given employees by managers, such as pay raises, bonuses, and benefits. Extrinsic rewards played a dominant role in earlier eras, when work was generally more routine and bureaucratic, and when complying with rules and procedures was paramount. Sense of meaningfulness.

Blood test could show women at risk of Post Natal Depression Researchers at Warwick Medical School have discovered a way of identifying which women are most at risk of postnatal depression (PND) by checking for specific genetic variants. The findings could lead to the development of a simple, accurate blood test which checks for the likelihood of developing the condition. Presenting the research to the International Congress of Endocrinology/European Congress of Endocrinology, Professor Dimitris Grammatopoulos, Professor of Molecular Medicine at the University of Warwick, said that approximately one in seven women who give birth suffer from PND, which normally starts around two weeks after childbirth. He explained: “Current screening policies rely on the opportunistic finding of PND cases using tools such as the Edinburgh Postnatal Depression Score (EPDS), but such tests cannot identify women at risk, ahead of them developing the condition.” “We believe that we have made a discovery with important clinical and social implications.

20 mental barriers you should let go of photo by admitchell08 You are in an imaginary hot air balloon. It’s just you and all of your belongings in the wicker basket. The only immediate solution is to get rid of excess weight and throw off at least half of your belongings. This happens to all of us in less dramatic circumstances. Our mental life follows the same fate. Some of them are useless ideas that drag us down considerably. So if you were in the hot air balloon situation, which of these mental barriers should we let go? 1. 2. 3. 4. 5. 6. 7. 8. 9. 10. 11. 12. 13. 14. 15. 16. 17. 18. 19. 20. Related posts: