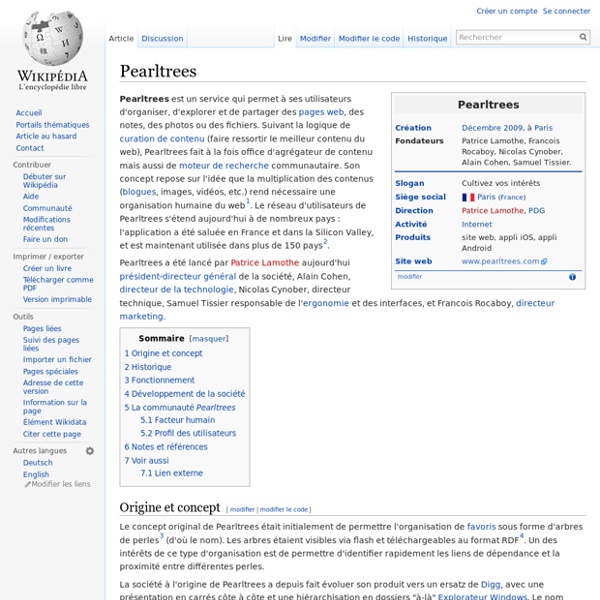 With the Traveling Geeks @ Pearltrees The Traveling Geeks met with Patrice Lamothe from Pearltrees (@pearltrees) for nearly two hours at the beginning of the Traveling Geeks tour. This guy is running the Internet startup buzz playboo k like perfect, at least for a French startup: he did a tour in the Silicon Valley visiting local influencers and bloggers, sponsored the Traveling Geeks and Leweb, talking at Leweb in plenary session (twice…), creating plug-ins, buttons, that can be placed everywhere on social sites, his site is in English, and so on. Personal brain Know more. Map your mind. Get the power of information visualization. Wikipedia : Pearltrees Pearltrees refers to itself as "a place for your interests".[8] Functionally the product is a visual and collaborative curation tool[9][10][11][12] that allows users to organize, explore and share any URL they find online as well as to upload personal photos, files and notes.[13] The product features a unique visual interface[14][15] that allows users to drag and organize collected URLs, and other digital objects.[16] that themselves can be further organized into collections and sub-collections,[17] (URLs). Users of the product can also engage in social/collaborative curation using a feature called Pearltrees Teams.[18] Pearltrees was founded by Patrice Lamothe, CEO,[22] Alain Cohen, CTO,[23] Nicolas Cynober, Technical Director,[24] Samuel Tissier, Ergonomy/UI[25] and Francois Rocaboy, CMO.[26] History[edit] Development of Pearltrees began in 2007. In July 2012 Pearltrees launched their iPhone app.

Mergent Online U.S. Company Data A fully searchable database with financials details of over 25,000 active and inactive companies International Company Data Subscribers gain access to companies representing over 95% of the non-U.S. global market capitalization Pearltrees Visualizes How You Organize the Web This post is part of Mashable's Spark of Genius series, which highlights a unique feature of startups. If you would like to have your startup considered for inclusion, please see the details here. The series is made possible by Microsoft BizSpark. Name: Pearltrees Quick Pitch: Pearltrees is a new visual way to organize content on the Web and connecting people's interests. Genius Idea: How do you organize the web on the browser?

18 Free Mind Mapping Tools for Teachers and Students 1- SpiderScribe This is a great mind mapping tool that allows users to easily visualize their ideas by connecting various pieces of information together and create free style maps. It also combines elements like text, images, files, calendar events and geographic locations. 2- EdistormEdistorm is a great web2.0 tool for educators. It allows you to work on your ideas during a structured brainstorming and organize them into sticky notes for others to see .

Wikipedia : Pearl The most valuable pearls occur spontaneously in the wild, but they are extremely rare. These wild pearls are referred to as natural pearls. Cultured or farmed pearls from pearl oysters and freshwater mussels make up the majority of those that are currently sold. Imitation pearls are also widely sold in inexpensive jewelry, but the quality of their iridescence is usually very poor, and often, artificial pearls are easily distinguished from genuine pearls. Pearls have been harvested and cultivated primarily for use in jewelry, but in the past they were also stitched onto lavish clothing.

Arachne Arachne is the central Object database of the German Archaeological Institute (DAI) and the Archaeological Institute of the University of Cologne, administrated by Reinhard Foertsch. Arachne is intended to provide archaeologists and Classicists with a free internet research tool for quickly searching hundreds of thousands of records on objects and their attributes. This combines an ongoing process of digitizing traditional documentation (stored on media which are both threatened by decay and largely unexplored) with the production of new digital object and graphic data. Wherever possible, Arachne follows a paradigm of highly structurized object-metadata which is mapped onto the CIDOC-CRM, to address machine-readable metadata strategies of the Semantic Web. This »structured world« of Arachne requires high efforts in time and money and therefore is only possible for privileged areas of data.

Pearltrees Dives Into Social Curating With Pearltrees Team Content curation and mapping service Pearltrees has decided to focus on the fact that people want to do things in groups and has as of today upgraded its core product with a groups functionality, called Pearltrees Team. Now accesible just by logging in, Pearltrees Team allows you to hook up with other people in order to create a Pearltree collaboratively in realtime. Ideally this goes down as such: You really care about fashion so you search for fashion in the Pearltrees search box and are confronted with really elaborate visual cluster displays of fashion blogs, each blog its own “pearl.” You decide that anyone who likes The Sartorialist is probably a good egg and click on the puzzle piece in the Pearltrees detail window in order to ask if you can join the team. If the team leader accepts, you then can see all the Pearltree curation happening as it happens as well as as comment on individual Pearltree decisions.

Mind Mapping Tools Here is a list of Mind Mapping Tools to better organize your personal life. MindMeister is an online mind mapping and collaboration tool that runs from your web browser and Mobile devices. It is used by teachers to help student perform activities and stimulate the increase of student achievements. VUE stands for Visual Understanding Environment, this mind mapping tool focuses on creating flexible management and the integration of digital resources to support of teaching, learning and research. This tool gives the user a flexible visual environment that is ideal for structuring, presenting, and sharing digital information.

Wikipedia : Team Not to be confused with Teem. A team comprises a group of people or other animals linked in a common purpose. Human teams are especially appropriate for conducting tasks that are high in complexity and have many interdependent subtasks. A group does not necessarily constitute a team. Teams normally have members with complementary skills and generate synergy through a coordinated effort which allows each member to maximize their strengths and minimize their weaknesses. Global Terrorism Database The updated GTD WebGL Globe is an interactive geographic visualization, currently in beta, that plots the location and frequency of yearly terrorist attacks worldwide from 1970-2014. It was developed by START using the WebGL Globe open platform created by the Google Data Arts Team. Automated geocoding from the OpenCage Geocoder supplements the geocoding available in the public dataset. Periscopic, a data visualization firm that promotes information transparency and public awareness, has produced an innovative, interactive tool that allows users to explore the impact and dynamics of GTD perpetrator groups. A World of Terror examines the 25 perpetrators that were most active between 1970 and 2013, visualizing their attack patterns across multiple dimensions including life span, recency, casualties, and geographic spread. The GTD Data Rivers 2.0 application is an interactive visualization tool that allows users to explore patterns of terrorism in the Global Terrorism Database (GTD).

The Curation Buzz... And PearlTrees Posted by Tom Foremski - April 12, 2010 My buddy Dave Galbraith is the first person I remember to first start talking about curation and the Internet, several years ago. He even named his company Curations, and created a tool/site for curation: Wists. Bog.Pearltrees : What's a Tteam? A team within Pearltrees is a group of people who have come together to collaboratively curate a common interest. When you want to join a team, just click on the “team up” button to send a request. As soon as your request has been accepted, you’ll be able to curate the pearltree with the other team members. Each member can add and organize the pearls and pearltrees of the team. Each member can also decide to accept or invite other members to expand the team. The founder has some privileges : he can express his objectives for the pearltree to the team in the editorial panel, and he’s the only one who can create subteams.