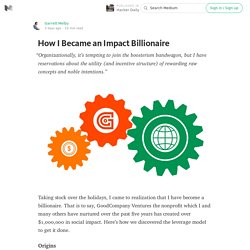 Taking stock over the holidays, I came to realization that I have become a billionaire. Change the World. Unearthing Data to Unleash Impact: Using Unique Data Sources to Drive Change. About Nick: Nick is the Data Science Manager at DataKind, an organization committed to harnessing the power of data science in the service of humanity. 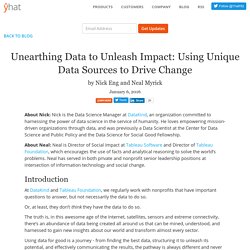 He loves empowering mission-driven organizations through data, and was previously a Data Scientist at the Center for Data Science and Public Policy and the Data Science for Social Good Fellowship. About Neal: Neal is Director of Social Impact at Tableau Software and Director of Tableau Foundation, which encourages the use of facts and analytical reasoning to solve the world’s problems. Neal has served in both private and nonprofit senior leadership positions at intersection of information technology and social change. Introduction At DataKind and Tableau Foundation, we regularly work with nonprofits that have important questions to answer, but not necessarily the data to do so. Or, at least, they don’t think they have the data to do so. 1. 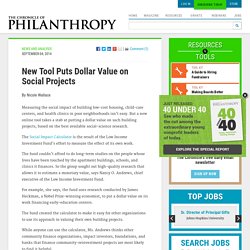 But a new online tool takes a stab at putting a dollar value on such building projects, based on the best available social-science research. The Chan Zuckerberg Initiative is Disrupting Nonprofits, And That’s a Good Thing. (Photo Credit: istockphoto) *This article originally appeared in The Huffington Post. 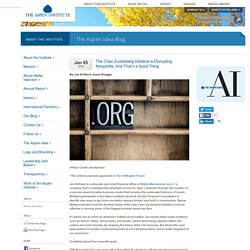 Jon Brilliant is co-founder and chief financial officer of BigfootBiomedical.com, a company that is changing the paradigm of care for Type 1 diabetes through the creation of a service-based durable business model that includes the automated delivery of insulin. Accelerating Social Impact CCC. Pollster Doug Miller in his recently published book, “Can the World be Wrong?” 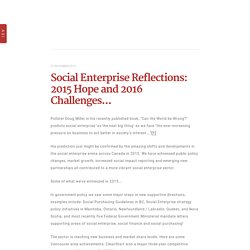 Predicts social enterprise ‘as the next big thing’ as we face “the ever-increasing pressure on business to act better in society’s interest…”[1] His prediction just might be confirmed by the amazing shifts and developments in the social enterprise arena across Canada in 2015. We have witnessed public policy changes, market growth, increased social impact reporting and emerging new partnerships all contributed to a more vibrant social enterprise sector. Some of what we’ve witnessed in 2015… Should foundations be playing a greater role in social investment? Just when you think you have dealt with one issue, for example, the availability of regular loans to charities, through Charity Bank, up pops another challenge – what about smaller, unsecured loans? 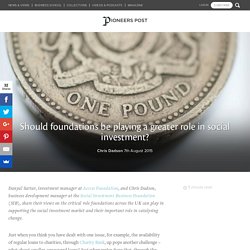 Just when we’ve done that, through the Social Investment Business (SIB) and CAF Venturesome, along come charities and social enterprises asking “What about some finance involving equity, where I only start repaying you when the income stream we grow is up and running?” A raft of social enterprise venture funds later, along come community groups looking to raise community shares. So how do we support that? Primarc eyes angel funding for startups with social impact. Rod Schwartz: The future of impact investing. Rod Scwartz, CEO of Clearly So, predicts rapid growth for the impact investment sector in 2016. 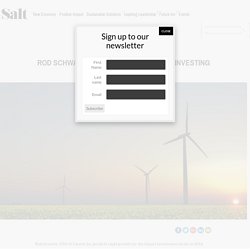 As a financial intermediary between high-impact organisations looking to raise capital and socially and environmentally oriented investors, ClearlySo’s deal flow and capital raising activity is a good barometer for growth in the UK impact investing market. In Q4 of 2015, we completed £21m+ in capital raises, our most successful quarter to date, with some significant momentum being carried into the new-year. The impact investment market is growing at a rapid pace, with some growth estimates for the UK market ranging from 30-40% per annum. Mitch Kapor, Founder of Lotus and Investor in Social Impact Startups. Neqtr. Neqtr is a socially conscious relationship app that helps you connect to new friends & new loves through causes & lifestyles, and provides planned dates like volunteering, charity, and unique social events (i.e. yoga, meditation, hiking, surfing, etc). 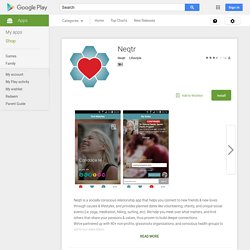 We help you meet over what matters, and find others that share your passions & values, thus proven to build deeper connections. We’ve partnered up with 40+ non-profits, grassroots organizations, and conscious health groups to aid in our date ideas. We’ve been getting some love:-"Neqtr is the anti-tinder dating app, helping you date for a good cause. " The State of Philanthropy: Why Millennials Will Revive the Nonprofit Sector - The Rockefeller Foundation. Topic: Innovation A version of this post originally appeared on LinkedIn. 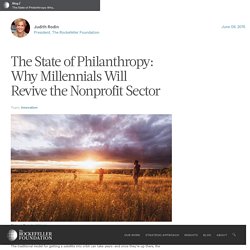 The traditional model for getting a satellite into orbit can take years–and once they’re up there, the technology is sometimes already obsolete, surpassed by innovations on the ground. The Social Enterprise Magazine - Pioneers Post. The Chancellor has announced an additional £80m over the next four years to be invested in social impact bonds (SIBs). 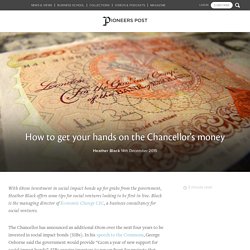 In his speech to the Commons, George Osborne said the government would provide “£20m a year of new support for social impact bonds”. SIBs require investors to pay up front for projects that help tackle social problems, and then receive payments based on the results achieved. The money will be used to help tackle issues including homelessness, mental health and youth unemployment, the Cabinet Office says.

Two Nigerian Startups Selected To Join The S Factory. Two Nigerian female-led startups have been selected to join the second generation of The S Factory, a pre-acceleration program aimed at supporting first time female entrepreneurs in building high impact startups. The startups – 500Apprentices and Content on Demand, will receive about US$15,000 equity-free funding and a 12 months working visa to Chile to be a part of the 3-month long acceleration program, whose overall goal is to help build the startups, a network and to participate in the local entrepreneurship ecosystem.

During the program, the startups will help in the social impact of entrepreneurship through sharing experiences and knowledge with other startups both within and outside the program in order to grow the women entrepreneurs’ network in Chile. “All of the startups are led and have been founded by women: this part of the requirements to be selected. The S Factory is an initiative of the Government of Chile and Start Up Chile.

Do social impact bonds really work for charities? A lot has been said and written about Social impact bonds (Sibs) in the past few years, but until now we’ve had little explanation as to whether they work and what it is like to be part of one. Now as 10 Sibs, which are part of the Department for Work and Pensions (DWP’s) three-year innovation fund helping disadvantaged young people, come to an end, we can get some answers. Career Connect, a Liverpool employment charity, raised its £1.5m Sib in 2012 with the help of Triodos Bank. Investment came from fund manager Bridges Ventures, Big Society Capital and the Esmée Fairbairn Foundation.