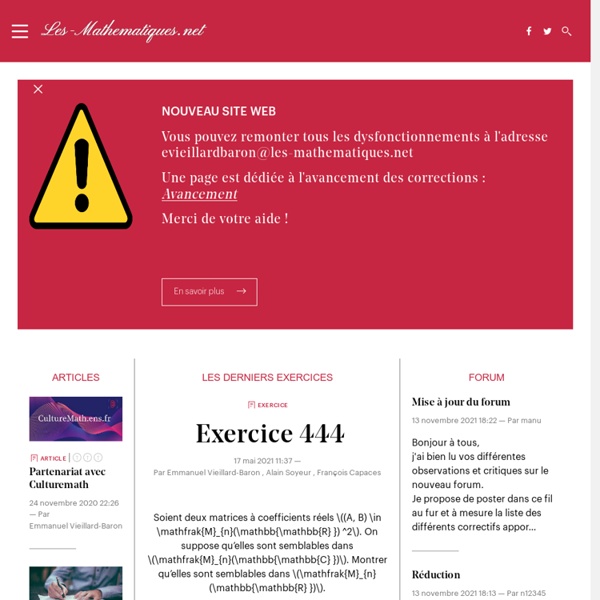 Math Encounters – The Museum of Mathematics Math Encounters Next presentation: “Peeling the World” Oct 1 at 4:00 PM by David Swart “Peeling the World” Oct 1 at 6:30 PM by David Swart The world is filled with spherical imagery: patterns on soccer balls, panoramic photos, and even the globe itself. Get Started Three Steps to Get Started OLI’s aim is to combine free, high-quality courses, continuous feedback, and research to improve learning and transform higher education. If you’re ready to check out OLI for yourself, get started in three easy steps. STEP 1Request an Instructor Account You will need to sign up for an instructor account. Once you fill out the form, we will confirm your account via email within two business days.

cocalc CoCalc does not support Firefox version 43. We recommend that you use the newest version of Google Chrome. Learn more about our browser requirements. Ben Webster (Northeastern University, Boston), lauréat en 2013 d'une Chaire junior de la FSMP, a donné 20 heures de cours sur le thème Higher representation theory in algebra and geometry. Résumé Categorical Lie algebra actions have shown themselves to be an important tool in recent years. They played a key role in representation theory of symmetric groups, in constructions of homological knot invariants and have shed new light on the theory of Cherednik algebras and the theory of quiver varieties.

Intro to proof theory (handbook article) Book article: Samuel R. Buss. "An Introduction to Proof Theory" in Handbook of Proof Theory, edited by S. R. Buss. The Beauty of Mathematics: A Visual Demonstration of Math in Everyday Life This lovely video short from Yann Pineill and Nicolas Lefaucheux of Paris video production agency Parachutes succinctly demonstrates the underlying mathematics behind everyday occurrences in the format of a triptych. On the left we see the mathematical equation, in the middle a mathematical model, and on the right a video of such things as snowflakes, wind, sound, trees and magnetism. The video begins with the following quote: