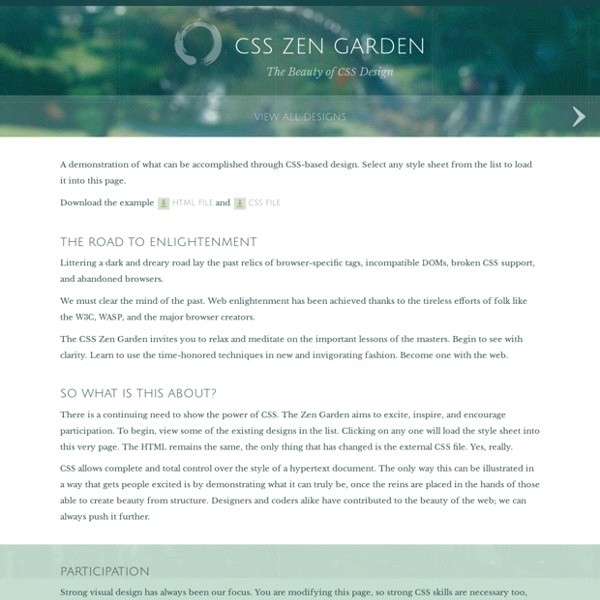 So What is This About? There is a continuing need to show the power of CSS. The Zen Garden aims to excite, inspire, and encourage participation. To begin, view some of the existing designs in the list. Clicking on any one will load the style sheet into this very page. The HTML remains the same, the only thing that has changed is the external CSS file.

Learn CSS Positioning in Ten Steps: position static relative absolute float 1. position:static The default positioning for all elements is position:static, which means the element is not positioned and occurs where it normally would in the document. Normally you wouldn't specify this unless you needed to override a positioning that had been previously set. 2. position:relative If you specify position:relative, then you can use top or bottom, and left or right to move the element relative to where it would normally occur in the document. Guide to Responsive-Friendly CSS Columns By Katy DeCorah On July 25, 2014 With CSS columns you can create a print-inspired layout with little added markup that can adapt beyond a fixed canvas. A supported browser will make calculations to wrap and balance content into tidy columns. If you're already working with a fluid layout, the columns will reflow automatically. With the right combination of properties, CSS columns can be an interesting layout option that is responsive-friendly while degrading gracefully.

Free Web Design Tutorials - How to Design Websites inShare9 One of our goals at Web Design from Scratch is "Everyone's website works". We're working towards a world where all websites are pleasant, easy, and appealing to use. Ben Hunt has been sharing his particular insights into what makes websites work here since 2004. How To Keep The Footer At The Bottom of the Page with CSS A familiar problem for many developers. A stunning design, perfectly crafted in semantic markup and CSS, that looks perfect in every browser… until you have a page without much content on it. Many people using dummy content on a standard-sized monitor will not notice this issue. Some might even argue that it’s not worth fixing at all… but I think they’re wrong, and just in case you agree, I’m going to show you a simple way to fix it. The Problem:

Categories Cascading Style Sheets are used to define the presentation layer of websites. How CSS works is not always self-evident, so many of these articles explain various aspects of using CSS. Cutting down on vendor prefixes A number of CSS3 properties that you can use unprefixed or with just a single vendor prefix. Full-width justified vertically centered navbar Two different ways of creating a full-width navigation bar with vertically centered links whose entire height is clickable.

page-break There isn't an actual page-break property in CSS. It is actually a set of 3 properties: page-break-before, page-break-after and page-break-inside. These properties help define how the document is supposed to behave when printed. For example, to make a printed document more book-like. Properties Eric Meyer: CSS CSS Work Books by Eric Including Smashing CSS, CSS: The Definitive Guide, Third Edition, CSS Pocket Reference, and Cascading Style Sheets 2.0 Programmer’s Reference, among several others. clear Summary The clear CSS property specifies whether an element can be next to floating elements that precede it or must be moved down (cleared) below them. The clear property applies to both floating and non-floating elements. When applied to non-floating blocks, it moves the border edge of the element down until it is below the margin edge of all relevant floats. This movement (when it happens) causes margin collapsing not to occur. When applied to floating elements, it moves the margin edge of the element below the margin edge of all relevant floats.

CSS Help Pile - CSS & Standards-Related Books, Magazines - Artypapers For some time I've been thinking of adding a books section to the help pile, but that always seemed sort of useless since so many books I would have posted pretty much would have been by the same person: Eric Meyer. Now, there's absolutely no reason for me to go through and attempt to re-create his biography (which for some reason I'm tempted to do) but certainly take a look at his site and pay particular attention to the section on CSS that links to many of the great resources he's made available. You can also check out the recent Web Standards Group interview: Ten Questions for Eric Meyer. (note: Obviously many, many people are aware of Eric Meyer already, so I wasn't sure if it was even necessary to mention him on the pile, but not mentioning him created this gapping hole.) Update: I added the category after all: CSS Literature

Performance & Organization - Learn to Code Advanced HTML Having the ability to write HTML and CSS with a solid understanding is a great expertise to have. As a website’s code base and traffic grows, a new skill set comes into play, one that is extremely important to both development time and user experience. Knowing the fundamentals of website performance and organization can go a long way. The organization and architecture of a code base can greatly affect not only the speed of development, but also the speed at which pages render.