10 cool HTML5 games and how to create your own 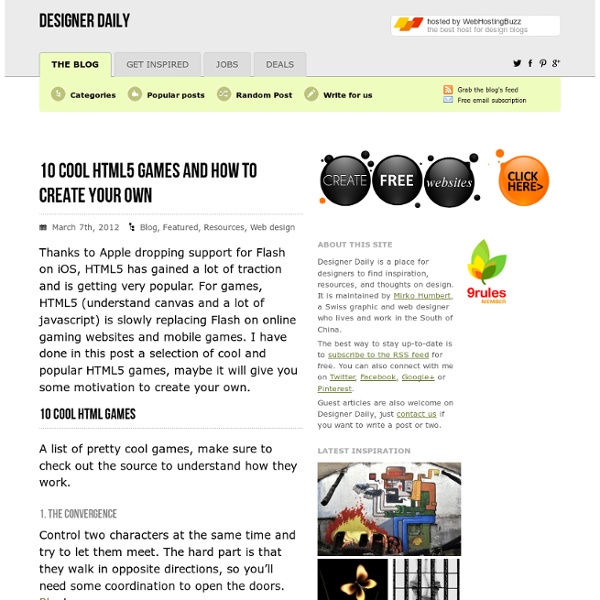 Thanks to Apple dropping support for Flash on iOS, HTML5 has gained a lot of traction and is getting very popular. For games, HTML5 (understand canvas and a lot of javascript) is slowly replacing Flash on online gaming websites and mobile games. I have done in this post a selection of cool and popular HTML5 games, maybe it will give you some motivation to create your own. 10 cool HTML games A list of pretty cool games, make sure to check out the source to understand how they work. 1. Control two characters at the same time and try to let them meet. 2. Defend your planet against incoming meteorites. 3. Addicting simple game where you race with a stick figure in levels designed by other users. 4. Your hero has fallen into a sinkhole and has a broken arm. 5. Not exactly a game, but a game emulator that gives you access to old games that you’ve probably missed. 6. A shoot-em-up with cool isometric 3D graphics. 7. A game created by Kevin Roast. 8. 9. A pretty entertaining tower defence game.

HTML5 Game Dev Tutorials iOS 7.1 - minimal-ui is anything but minimal for HTML5 game developers Posted 15:16PM on March 20 2014 by Pascal Rettig This is a guest post from Odobo CTO Peter Mareš. As the developer program for real-money gaming, we assess the impact that any new software update is likely to have on our developer community. The most exciting addition is a modification to how Safari handles web apps: it makes development easier, improves the look of games and enhances the player experience. In this article, we cover some iOS 7.0 history, prior solutions, and the future ahead with 7.1. iOS 7.0 Safari: a brief history In iOS 7.0, Mobile Safari hid the address bar and changed the behaviour of both full-screen browsing and full-screen mode. iOS 7.0 Safari: a temporary solution Since no browser event was fired when the browser bars appeared, workarounds had to poll the visible browser area for each frame (we used requestAnimationFrame). This provided a solution; however, it was a messy hack. About Odobo

No Tears Guide to HTML5 Games Introduction So you want to make a game using Canvas and HTML5? Follow along with this tutorial and you'll be on your way in no time. The tutorial assumes at least an intermediate level of knowledge of JavaScript. You can first play the game or jump directly to the article and view the source code for the game. Creating the canvas In order to draw things, we'll need to create a canvas. var CANVAS_WIDTH = 480;var CANVAS_HEIGHT = 320; var canvasElement = $("<canvas width='" + CANVAS_WIDTH + "' height='" + CANVAS_HEIGHT + "'></canvas>");var canvas = canvasElement.get(0).getContext("2d"); canvasElement.appendTo('body'); Game loop In order to simulate the appearance of smooth and continuous gameplay, we want to update the game and redraw the screen just faster than the human mind and eye can perceive. var FPS = 30; setInterval(function() { update(); draw();}, 1000/FPS); For now we can leave the update and draw methods blank. function update() { ... }function draw() { ... } Hello world Player movement

Tutorial: Simple game with HTML5 Canvas - part 1 Check other language versions: [RUSSIAN] Tutorial: Simple game with HTML5 Canvas Part 1 - Introduction & Background Part 2 - Character & Animation Part 3 - Physics & Controls Part 4 - Platforms & Collisions Part 5 - Scrolling & Game States If you are interested in news and updates of that tutorial just follow me on twitter: [MichalBe's Twitter] Because 10KApart is closed now, and we are all waiting for the results, it is good time to remind my very simple "Stairs to heaven" game and explain in details how it was made. StH is very simple clone of Doodle Jump, but to be honest I was inspired by Icy Tower and discover DJ after I submit StH to the competition. Part 1. That's all in HTML we will need during this tutorial. First of all its important to understand one thing about canvas - it is not possible to move objects in the canvas surface. var clear = function(){ ctx.fillStyle = '#d0e7f9'; //set active color to #d0e... Nice, but boring less only a little.

How To Design A Mobile Game With HTML5 Advertisement Care to make a cross-platform mobile game with HTML5? No need to dabble in Java or Objective-C? A handful of game developers are pushing the envelope of mobile HTML5 games at the moment. Getting Started Before you start sketching the next Temple Run or Angry Birds, you should be aware of a few things that could dampen your excitement: Performance Mobile browsers are not traditionally known for their blazing JavaScript engines. Now, as a Web developer you’re used to dealing with the quirks of certain browsers and degrading gracefully and dealing with fragmented platforms. In this tutorial, we’ll make a relatively simple game that takes you through the basics and steers you away from pitfalls. It’s a fairly simple game, in which the user bursts floating bubbles before they reach the top of the screen. We’ll develop this in a number of distinct stages: 1. Enough of the background story. As mentioned, there is a plethora of resolution sizes and pixel densities across devices. 2.

Create a Mobile Educational Game with HTML5 Kids nowadays get bored at school. A teacher talking to dozens of kids and expecting them to transform those low pitched sound vibrations into interesting concepts in their heads, can you imagine? And learning math in particular is hard for many, including some of my cousins and sons and daughters of people I work with. HTML5 Mobile Game Development by Example – Educational GameHTML5 Mobile Game Development by Example – Veggies vs Zombies In this tutorial, we’ll be creating a simple mobile game to learn multiplication tables (or develop other math skills) in the form of a racing game. We’ll be using the Quintus game development framework on this tutorial. The requirements for this tutorial are the following: Familiarity with HTML, CSS, JavaScript and basic object oriented concepts.Clone or download Quintus from it’s Github page.Setup a local webserver. Create a new folder in your web server public folder (www folder in most cases), let’s call this new folder “racingmath”. 1. 2. 1. 2. 3.

The Reality of HTML5 Game Development and making money from it The Reality of HTML5 Game Development and making money from it Note: This was written near the end of January 2012 and as such reflects the state of the technology and markets at the time. Everything is moving so fast a lot of the information below is subject to change, so bear that in mind. HTML5 game development and indeed the abilities of web browsers are in state of rapid evolution right now. On the HTML5 Game Devs site that I run I’ve been noticing an increasing pace of new content, game releases, tutorials, business news and technology. HTML5 is just a mark-up standard! Relax When I talk about “HTML5″ I’m doing so from the popular media use of the word, rather than the technical one. What is an HTML5 game? This seemingly innocuous question actually has a myriad of answers, and can get complex pretty fast. Most developers know CSS as the stuff that styles web sites. DOM (Document Object Model) The DOM is familiar territory for web developers but much less so for everyone else. Canvas

Geolocation API Specification Abstract This specification defines an API that provides scripted access to geographical location information associated with the hosting device. Status of This Document This section describes the status of this document at the time of its publication. Other documents may supersede this document. This document was published by the Geolocation Working Group as a Last Call Working Draft on @@ May 2014. it merged errata into the Geolocation API v1 Recommendation, which was published on October 24, 2013.This document is intended to become a W3C Recommendation. Publication as a Last Call Working Draft does not imply endorsement by the W3C Membership. Comments on the document should be sent to the Working Group's public mailing list public-geolocation@w3.org (subscribe, archives). This document has been produced by the W3C Geolocation Working Group, following the procedures set out for the W3C Process, with the intention of advancing it along the W3C Recommendation track. Table of Contents 3 Scope