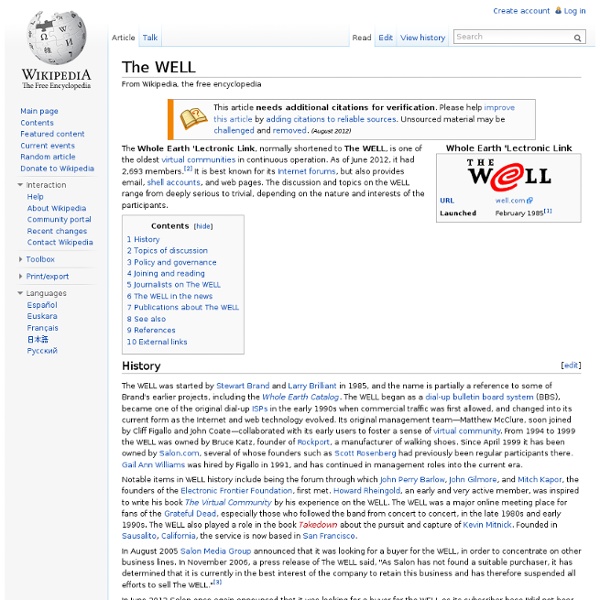 The Whole Earth 'Lectronic Link, normally shortened to The WELL, is one of the oldest virtual communities in continuous operation. As of June 2012, it had 2,693 members.[2] It is best known for its Internet forums, but also provides email, shell accounts, and web pages. The discussion and topics on the WELL range from deeply serious to trivial, depending on the nature and interests of the participants. History[edit] In August 2005 Salon Media Group announced that it was looking for a buyer for the WELL, in order to concentrate on other business lines. In June 2012 Salon once again announced that it was looking for a buyer for the WELL as its subscriber base "did not bear financial promise". In September 2012, Salon Media Group sold the WELL to the group of members.[6] Topics of discussion[edit] The WELL is divided into general subject areas known as conferences. Policy and governance[edit] Joining and reading[edit] Journalists on The WELL[edit] The WELL in the news[edit] See also[edit]

The Whole Earth Catalog Effect [Header = Intro] In the opening pages of The Electric Kool-Aid Acid Test, Tom Wolfe describes “a thin blond guy with a blazing disk on his forehead,” wearing “just an Indian bead necklace on bare skin and a white butcher’s coat with medals from the King of Sweden on it.” This guy is Stewart Brand, a Stanford-educated biologist and an ex–Army paratrooper turned Ken Kesey cohort and fellow merry prankster who, in 1966, at age 28, had launched a nationwide campaign to convince nasa to release for the first time a photo of the entire planet taken from space. While on that flight, Brand came up with a solution: to publish a magazine in the vein of the LL Bean catalog—which he’d always admired for its immense practicality—that would blend liberal social values with emerging ideas about “appropriate technology” and “whole-systems thinking.” The WEC lasted four years (along with some special editions since). It is now 40 years later and the WEC’s avalanche of influence continues to flow.

Stewart Brand Stewart Brand (born December 14, 1938) is an American writer, best known as editor of the Whole Earth Catalog. He founded a number of organizations, including The WELL, the Global Business Network, and the Long Now Foundation. He is the author of several books, most recently Whole Earth Discipline: An Ecopragmatist Manifesto. Life[edit] Brand attended Phillips Exeter Academy, before studying biology at Stanford University, from which he graduated in 1960. American Indians[edit] Through scholarship and by visiting numerous Indian reservations, he familiarized himself with the Native Americans of the West. Merry Pranksters[edit] By the mid-1960s, he was associated with author Ken Kesey and the "Merry Pranksters", and in San Francisco, with his partner Zach Stewart, Brand produced the Trips Festival, an early effort involving rock music and light shows. NASA images of Earth[edit] Earth from space, by ATS-3 satellite, 1967 Douglas Engelbart[edit] Whole Earth Catalog[edit] The WELL[edit]