Google Developers. Your code editor is your main development tool; you use it to write and save lines of code. 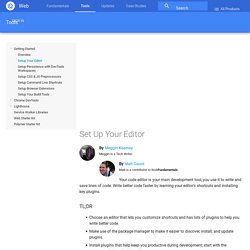 Write better code faster by learning your editor's shortcuts and installing key plugins. Choose an editor that lets you customize shortcuts and has lots of plugins to help you write better code.Make use of the package manager to make it easier to discover, install, and update plugins.Install plugins that help keep you productive during development; start with the recommendations in this guide. Install Sublime text editor Sublime is a great editor with a solid base level of functionality which makes writing code a pleasure.

You can install a package manager that makes it easy to install plugins and add new functionality. There are currently two download options for Sublime Text, either version 2 or version 3. Why use a package manager? Package managers make it easy to find, install, and keep packages & plugins up-to-date. HAML Best Practices – Rivalfox Blog. Is your competitor's marketing better? 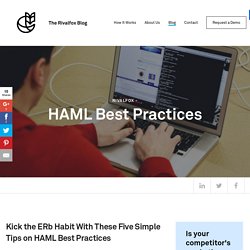 Get competitive insights in a personal benchmarking. Kick the ERb Habit With These Five Simple Tips on HAML Best Practices You, talented Ruby developer, should absolutely be proud of yourself for implementing clean, readable Ruby in your models and controllers per thoughtbot‘s standards, and for having the discipline to turn an 81-character “one-liner” into multiple lines. However, your view code deserves equal respect. Unlike model and controller code, view code isn’t in Ruby’s syntax, and as a result, the standard of quality tends to be lower as there is no simple style guide. Tip 1: Use Blocks. HAML isn’t Ruby, but it still incorporates some convenient elements of it, and there’s no better example of that than the block syntax. Solr - Logo.clearbit. Ruby Issue Tracking System. Refactoring Walkthrough · Darren Coxall. Refactoring is the process of restructuring, re-architecting and modifying existing code without affecting the output of the code. 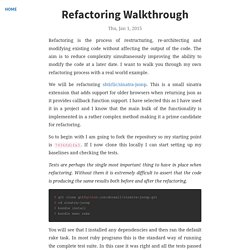 The aim is to reduce complexity simultaneously improving the ability to modify the code at a later date. I want to walk you through my own refactoring process with a real world example. We will be refactoring shtirlic/sinatra-jsonp. This is a small sinatra extension that adds support for older browsers when returning json as it provides callback function support. I have selected this as I have used it in a project and I know that the main bulk of the functionality is implemented in a rather complex method making it a prime candidate for refactoring. So to begin with I am going to fork the repository so my starting point is 7436fd1fa3. 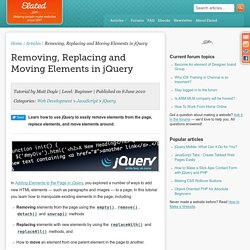 How to Create a Chrome Extension in 10 Minutes Flat. One of my favorite things about the Chrome web browser is how extensible it is. 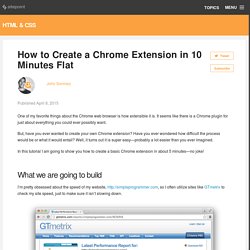 It seems like there is a Chrome plugin for just about everything you could ever possibly want. But, have you ever wanted to create your own Chrome extension? Tools. Git tab completion in zsh throwing errors. Animation 2. Last updated 24 Jan 2015 In part 1 we looked at how we could use _uihooks to fade in and out our list items. 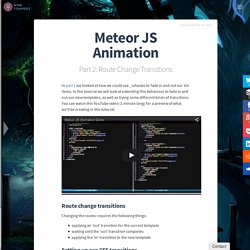 Touch And Mouse: Together Again For The First Time. Introduction For close to thirty years, desktop computing experiences have centered around a keyboard and a mouse or trackpad as our main user input devices. 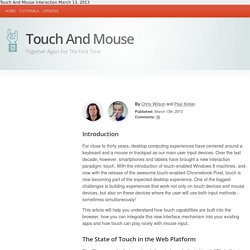 Over the last decade, however, smartphones and tablets have brought a new interaction paradigm: touch. With the introduction of touch-enabled Windows 8 machines, and now with the release of the awesome touch-enabled Chromebook Pixel, touch is now becoming part of the expected desktop experience. One of the biggest challenges is building experiences that work not only on touch devices and mouse devices, but also on these devices where the user will use both input methods - sometimes simultaneously!

This article will help you understand how touch capabilities are built into the browser, how you can integrate this new interface mechanism into your existing apps and how touch can play nicely with mouse input. The State of Touch in the Web Platform All done? Animation 2.