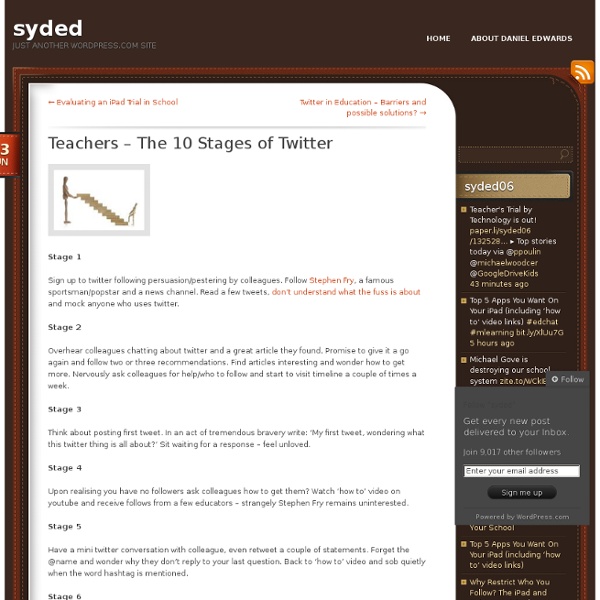 Stage 1 Sign up to twitter following persuasion/pestering by colleagues. Follow Stephen Fry, a famous sportsman/popstar and a news channel. Read a few tweets, don’t understand what the fuss is about and mock anyone who uses twitter. Stage 2 Overhear colleagues chatting about twitter and a great article they found. Stage 3 Think about posting first tweet. Stage 4 Upon realising you have no followers ask colleagues how to get them? Stage 5 Have a mini twitter conversation with colleague, even retweet a couple of statements. Stage 6 Practise a couple of tweets that include @names and hashtags. Stage 7 Retweet any link you find interesting as people might read them. Stage 8 Thank colleagues for introducing you to twitter, impressed with the knowledge you have gleaned and your growing number of followers. Stage 9 Reflect that twitter is an incredibly positive place and everyone is full of praise. Stage 10 (the reason for this post) When seeking opinion from a range of people, ask PLN to respond.

5 Ways Twitter Strengthens A School’s Learning Community Cross-posted at eFACE Today This year, our K-6 staff began learning in a new virtual way using Twitter. After a couple staff in-service trainings and after school workshops, parents and teachers ventured into this new educational Twitterverse. As we enter the final week of school, I’d like to share it’s initial impact on teaching and learning from my principal’s lens. Our staff’s “learning by Twitter” has occurred in multiple formats this school year:

All I Really Need to Know I Learned in Kindergarten: How to Use Twitter From Kindergarten to College 6.14.12 | As Twitter continues to make more inroads into academic spaces, two recent articles demonstrate its use across the educational spectrum. Both stories—a New York Times SchoolBook inside-look at a tweeting class of kindergarteners, and a ProfHacker column at The Chronicle of Higher Education on Twitter’s use in college classrooms—show not only how educators are using Twitter and social media for a great variety of tasks, but how educators are very aware of how to use them responsibly. At Public School 150, a technologically sophisticated elementary school in TriBeCa, kindergarten teacher Jennifer Aaron engages her class in a group tweeting effort three times a week.

7 Outstanding Free Books for your iPad Below is a list of some excellent books for your iPad. I have curated this list over the last couple of months and I kept adding to it every time I stumble upon a resource somewhere online.I don't know if you like reading books on your iPad or not but let me tell you this: having at least a couple of titles installed on your iPad would really be of great help particularly in those moments when you are stuck somewhere and have nothing to do but waiting. Reading is a habit ( luckily a good one ) that we can ACQUIRE by force of habituation at least in the eyes of Skinnerian theory.The more you read , the fluent you get at reading and the more used your mind becomes to the act of reading. Check out these books I selected for you. All of them are free and require iBooks.

Twitter for Professional Development: Ultra Beginner Edition, Part 2 Written by Mark Brumley Beyond the Basics In the post Twitter for Professional Development: Ultra Beginner Edition, I offered a simple way to demonstrate the power of Twitter to teachers. Utilizing Twitter Lists I recently read the blog post, Twitter Snobs or Efficient Learners written by Bill Ferriter. In this post Bill states, "whenever the number of people that I'm following grows to more than 200, I simply get lost in the streams of information that come through my Twitter feed. At that point, Twitter becomes useless, doesn't it?" This is something that I can relate to, however, I have found that you CAN follow more than 200 people on twitter and STILL can the benefits of learning from them. Why would you want to follow so many people on Twitter?

Educators Guide to the use of Pinterest in Education Some educational Pinners to follow This is the editor of the famous blog cool cat teacher. It has over 69 boards all with more than 600 pins. Some of her best boards include "Teaching Ideas and App", Collaborative Writing", and " Global Collaboration in Education ".

How (And Why) Teachers Should Blog So how do I get techno-nervous teachers at my school to read my blog, write their own blogs and encourage their students to write one too? It seems that in order to ease them into this phenomena of blogs and their promise of expanding ones creativity, writing and collaboration skills, I might need to disguise it as journaling. Language Arts and Reading specialists will love that! Right? How do I convince them that their students are thirsty for the knowledge they want to share but not the same way that they themselves obtained it? These kids are 21st century students and are adapting to a digital world that they are eager to learn from.

Personal Learning Networks for Educators: 10 Tips By Dr. Mark Wagner I often begin my workshop on personal learning networks (PLN) for educators by asking these questions: Who is in your learning network? Who do you learn from on a regular basis? Who do you turn to for your own professional development? Can Twitter replace traditional professional development? Twitter and Facebook might soon replace traditional professional development for teachers. Instead of enduring hours-long workshops a few times a year, teachers could reach out to peers on the Internet in real time for advice on things like planning a lesson (or salvaging a lesson that’s going wrong), overcoming classroom management problems, or helping students with disabilities. Or, at least, that’s what a group of Internet-savvy educators who convened in New York City this week are hoping. A presenter at the #140edu conference. (photo courtesy of @mbteach, via Twitter) “Being connected [through social-networking sites] is an opportunity for growth anytime, anywhere,” said Steve Anderson, director of instructional technology for the Winston-Salem/Forsyth County Schools in North Carolina, speaking yesterday at the second annual #140edu conference, a reference to Twitter’s 140 character limit for tweets.

The 2012 A-Z List Of Educational Twitter Hashtags We got so many additions and updates to our 2011 list we thought it was time to bring you the most up-to-date list for 2012. So, without further ado, here’s the 2012 A-Z list of educational Twitter hashtags. We went through all the comments on the 2011 version , wrote down all the Twitter and Facebook updates, and compiled this list over the course of several months. What follows is our best effort to bring you the biggest and baddest list of hashtags. - From the Principal's Office: Going 1:1? How Would You Respond To Comments Like This? 4 Comments January 14, 2013 By: Patrick Larkin Jan 13 Written by: 1/13/2013 5:17 PM ShareThis Also posted on the Connected Principals Blog