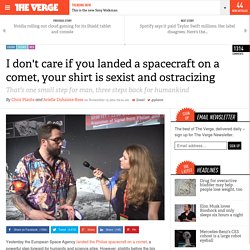 However, slightly before the big moment, coverage of the event reminded us how much progress remains to be accomplished back on Earth. A number of the scientists involved on this incredible project were interviewed in the hours leading to contact by Nature Newsteam. One of those Rosetta scientists was Matt Taylor, who chose to dress, for this special occasion, in a bowling shirt covered in scantly clad caricatures of sexy women in provocative poses. "This is going to be a very long day but a very exciting day," said Taylor. "I think everyone should enjoy it because we're making history. " "I made a big mistake and I offended many people" No one knows why Taylor chose to wear that shirt on television during a massive scientific mission. This is the sort of casual misogyny that stops women from entering certain scientific fields.

The day I finally gave a f**k. My message to Matt Taylor: Why Attacking Dr. Matt Taylor and #ShirtGate Belittles Feminism. Bibliometrics: Global gender disparities in science. Despite many good intentions and initiatives, gender inequality is still rife in science. 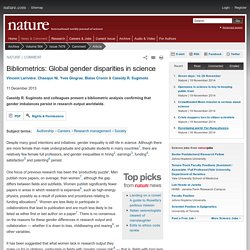 Although there are more female than male undergraduate and graduate students in many countries1, there are relatively few female full professors, and gender inequalities in hiring2, earnings3, funding4, satisfaction5 and patenting6 persist. One focus of previous research has been the 'productivity puzzle'. Men publish more papers, on average, than women7, although the gap differs between fields and subfields. Women publish significantly fewer papers in areas in which research is expensive8, such as high-energy physics, possibly as a result of policies and procedures relating to funding allocations4. Women are less likely to participate in collaborations that lead to publication and are much less likely to be listed as either first or last author on a paper7. Gender, output, collaboration and citation data Bias by numbers Next we looked at collaboration. 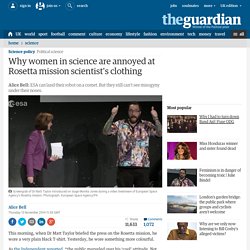 Yesterday, he wore something more colourful. As the Independent reported, “the public marveled over his ‘cool’ attitude. Not since Brian Cox rocked up with a Beatle haircut and soft northern vowels has a scientist become trended so suddenly over such a short period.” It follows a spate of press on this “geezer scientist” who seems like a charming and appealing break from images of labcoats.

Except not everyone was so pleased at Taylor’s style. In some ways, responses to Taylor’s shirt are a refreshing change from the over-emphasis placed on women’s clothing. Not only did Taylor not ask himself whether it was appropriate, none of his colleagues seemed to either (or if they did, they were ignored). Taylor recently joined an online chat with the Wall Street Journal.

Yasas Dita sur Twitter : "@BadAstronomer so @roseveleth can call him asshole, but we cant call her cunt?"... Notes from a Pornographer on Sexist Sexual Imagery and Behavior – UPDATED. Please note: The comment policy for this post is somewhat different than usual.

It’s at the end of this post. So, I’m a pornographer. I have written pornography, produced it, published it, edited it, sold it, bought it, reviewed it, modeled for it, narrated it, read it publicly, and performed in it. I have written/ produced/ published/ edited/ sold/ bought/ reviewed/ modeled for/ narrated/ read/ performed in pornographic fiction, video, photography, comics, and probably other media I can’t remember now. (I’ve even written about erotic cave paintings. So. I am sick to death of hearing that feminists are sex-hating prudes because we don’t want imagery of women in videogames to be overwhelmingly sexual.

Repeat for other issues, as appropriate. The idea that sex-positivity and sexual liberation means everybody expressing every sexual thought and acting on every sexual desire, the minute it pops into our heads — this is bullshit. Casual sexism: When a shirt is more than a shirt. Last week, the European Space Agency landed a space probe on a comet.

It was big news—historic, even. Phil Plait writes Slate’s Bad Astronomy blog and is an astronomer, public speaker, science evangelizer, and author of Death From the Skies! But another event caused a stir at the same time, tangentially related to the event. Matt Taylor, the Rosetta mission’s project scientist, went on the air to talk about the successful landing. However, his choice of attire was unfortunate. He was wearing a bowling shirt covered in pinup-style drawings of scantily clad women. (89) Bardock Obama - Timeline Photos. Twitter97. 10818619_10152858212502884_84808135_n.jpg (JPEG Image, 700 × 700 pixels) Twitter97.jpg Photo by shakespeares_sister.