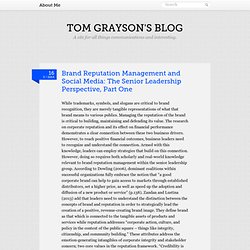 Managing the reputation of the brand is critical to building, maintaining and defending its value. The research on corporate reputation and its effect on financial performance demonstrates a clear connection between these two business drivers. However, to reach positive financial outcomes, business leaders need to recognize and understand the connection. Armed with this knowledge, leaders can employ strategies that build on this connection. However, doing so requires both scholarly and real-world knowledge relevant to brand reputation management within the senior leadership group. Tom Grayson's Blog. Take note: 'The web' is not 'the Internet'. Here's a note to self: If you’re in Silicon Valley, never mistake the web for the Internet. 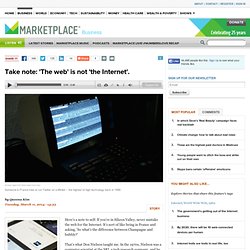 It’s sort of like being in France and asking, 'So what’s the difference between Champagne and bubbly? ' That’s what Don Nielson taught me. In the 1970s, Nielson was a computer scientist at the SRI, a tech research company, and he was on one of the teams that started the Internet. And when I met him, I said, "You were one of the guys who helped created the web! " "Absolutely not, I had nothing to do with the web," he said. Carnival Cruise Lines Revive Brand with Social Media. An Executive View of the Difference Between Brand and Reputation. Posted on Thursday, September 5, 2013 . by Peter Zandan, Ph.D. 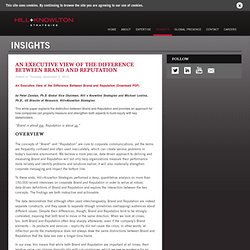 Global Vice Chairman, Hill + Knowlton Strategies and Michael Lustina, Ph.D., US Director of Research, Hill+Knowlton Strategies This white paper explains the distinction between Brand and Reputation and provides an approach for how companies can properly measure and strengthen both aspects to build equity with key stakeholders. Grunig revisited: digital communication and the Four Models of Public Relations. It must be the time of year but I’ve had a couple of conversations in the last week or so with post graduate students seeking opinion on how digital communication fits with Grunig’s Four Models of Public Relations. 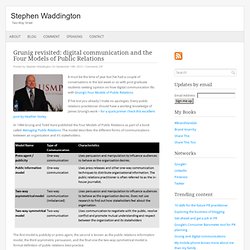 If I’ve lost you already I make no apologies. Every public relations practitioner should have a working knowledge of James Grunig’s work – for a quick primer check this excellent post by Heather Yaxley. In 1984 Grunig and Todd Hunt published the Four Models of Public Relations as part of a book called Managing Public Relations. The model describes the different forms of communications between an organisation and it’s stakeholders. The first model is publicity or press agent, the second is known as the public relations information model, the third asymmetric persuasion, and the final one the two-way symmetrical model is formal definition of public relations best practice. GRUNIG. Social media crisis communication: Lessons from Target's Data Breach - ZOG Digital Blog : ZOG Digital Blog. In the digital age, even the most prepared companies are at risk for having data leaked or stolen. 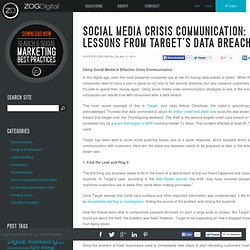 When this happens, companies need to have a plan in place to not only fix the security loophole, but also reassure customers so they feel it’s safe to spend their money again. Using social media crisis communication strategies is one of the many ways that companies can rebuild trust with consumers after a data breach. The most recent example of this is Target. Just days before Christmas, the nation’s second-largest retailer acknowledged Thursday that data connected to about 40 million credit and debit card accounts was stolen as part of a breach that began over the Thanksgiving weekend. The theft is the second-largest credit card breach in U.S. history, exceeded only by a scam that began in 2005 involving retailer TJ Maxx. Target has been able to avoid some potential losses due to a quick response, which included direct and constant communication with customers. 1. 2. 3. 4. Get Your CEO to Tweet. Big company executives are virtually invisible on social networks.

Whether it’s CEOs, CMOs, or CIOs only a small number of them are finding time to engage with their peers and their customers on Twitter, Facebook, Google+ and other social networks. Most prefer to leave that to their marketing and PR teams. Top 10 Brands on Social Media in 2013 [CHART] Samsung was the most popular social-media brand worldwide in 2013, according to Starcount, which compiled data across Facebook, YouTube and other sites to come up with its top 10 list. 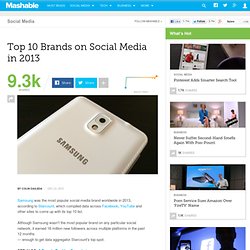 Although Samsung wasn't the most popular brand on any particular social network, it earned 16 million new followers across multiple platforms in the past 12 months— enough to get data aggregator Starcount's top spot. Walt Disney came in second place, largely due to a one-million-follower increase on Sina Weibo, a Chinese microblogging site. 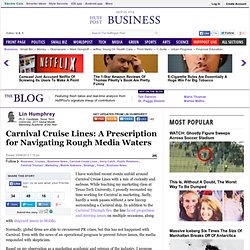 While teaching my marketing class at Texas Tech University, I proudly recounted my time working for Carnival in marketing. Sadly, hardly a week passes without a new hiccup surrounding a Carnival ship. In addition to the Carnival Triumph fire, the line faced propulsion and steering issues on multiple occasions, along with shipyard issues in Mobile. Normally, global firms are able to circumvent PR crises, but this has not happened with Carnival. Even with the news of an operational program to prevent future issues, the media responded with skepticism. Based on my observation as a marketing academic and veteran of the industry, I propose five steps Carnival should take to improve its media problems. 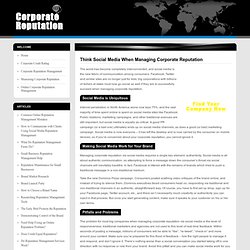 Facebook, Twitter and similar sites are no longer just for kids; big corporations with billions of dollars at stake must now go social as well if they are to successfully succeed when managing corporate reputation. What's in a Name? Reputation Building and Corporate Strategy. Abstract Firms compete for reputational status in institutional fields. 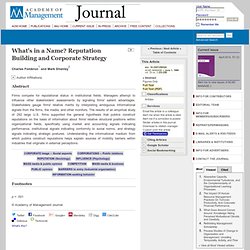 Understanding the informational medium from which publics construct reputations helps explain sources of mobility barriers within industries that originate in external perceptions. Social Media and Reputation Management. Reputation Management and Social Media. How people monitor their identity and search for others online Reputation management has now become a defining feature of online life for many internet users, especially the young. 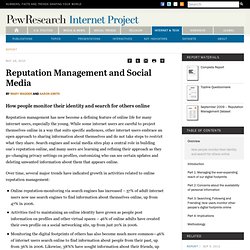