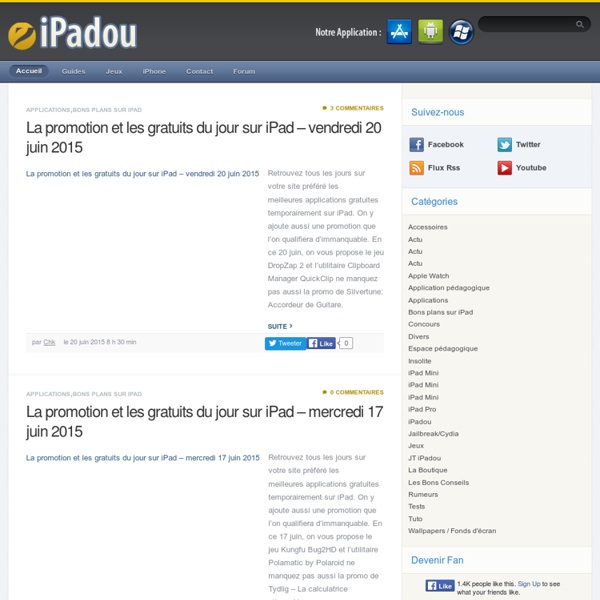 Some Of The Best Designs Of iPad Apps For Inspiration - 33 Examples An app made for iPad is an app like no other. That’s because apps for iPad are designed specifically to take advantage of all the technology built into iPad. However, not all iPad apps are to be considered well designed. Most of them have a rather simple design, making an app look similar to the next. Still, some apps have a creative approach and tend to make things differently so that they stand out and be liked not only for their functions and usability, but also for their design. 33 of these intelligently designed apps are here in this article for inspiration, to help you see how a good looking app should be, in case you’ll start designing your own app. iStudiez Pro

PrometheanPlanet There's a lot of talk in the education sector of Bring Your Own Device (BYOD) initiatives and I've recently taken an interest in how tablets, such as iPads, can be used in the classroom. Back in June, I went to the ISTE 2011 conference with several goals in mind, but one of them was to find the answer to this question: What can I do with an iPad in an ActivClassroom? (Although other tablets are available, I was particularly interested in the iPad as that's the one I have!) I had several ideas, but wanted to verify them for myself.

PrometheanPlanet There's a lot of talk in the education sector of Bring Your Own Device (BYOD) initiatives and I've recently taken an interest in how tablets, such as iPads, can be used in the classroom. Back in June, I went to the ISTE 2011 conference with several goals in mind, but one of them was to find the answer to this question: What can I do with an iPad in an ActivClassroom? (Although other tablets are available, I was particularly interested in the iPad as that's the one I have!) I had several ideas, but wanted to verify them for myself. I certainly didn't find all of the answers, but thought I'd write this blog to share what I did find out and my thoughts on it.

Star Walk - Interactive Astronomy Guide Stargazing guide Enjoy Stars Day or Night Now on Apple Watch! Star Walk is an interactive astronomy guide that shows celestial objects in the exact positions on the sky above you, providing detailed information about them. It helps anyone even remotely interested in astronomy find their way across the sky, determine where to look for any object, rewind or fast-forward time to see how celestial bodies move. It inspires curiosity about the Universe and helps users understand amazing cosmic phenomena.

7 Top Sites for Finding Useful iPhone and iPad Applications The iPhone and iPad are the hottest gadgets today and iPhone 4 that just was released will only make iPhone even more popular. One of the best things about the iPhone and the iPad is the huge number of applications available for them. There are literally thousands of iPhone and iPad related applications listed in the App store so how do you filter out the really good ones from the masses. 7 Apps That Will Help You Use Your iPad For Writing Projects While each of us has our own particular needs, I’m sure one or more of these apps will serve your needs. So get ready to set up a folder on your tablet and download a useful collection of resources. Evernote At the top of the list, the popular Evernote app (iTunes Store Link) and web syncing service is an essential tool for writing on the iPad. You can throw in all kinds of text based files, as well as photos and audio notes, into Evernote which will automatically sync all your notes to your iPad, as well as your Mac or PC.

Top 60 best free iPad apps 2012 On comparing iPad apps with iPhone equivalents, one thing rapidly becomes clear: apps for Apple's tablet are pricier. Many of the best free iPhone apps cost money in their iPad incarnations, and the quality level of what's still free is often ropey. But among the dross lie rare gems – iPad apps that are so good you can't believe they're still free.

50 best free iPad games So you've got an iPad and have come to the dawning realisation that you've got no cash left to buy any games for it. Have no fear, because the App Store offers plenty of iPad gaming goodness for the (unintentional or otherwise) skinflint. Our pick of the 70 best free iPad games is listed below. Note that apps marked "universal" will also work on an iPhone or iPod touch, scaling down controls and graphics accordingly. 1.

App Gems: Honorable mentions It isn’t that hard to come up with a list of App Gems winners. The difficult part is keeping that list down to a manageable length. When Macworld editors first meet to discuss our awards for great iOS apps, the number of nominees runs in the triple digits. From there, we whittle down the names to just a handful of winners. The following apps just barely missed the cut—but they still deserve your attention if you’re on the lookout for outstanding apps for your iPhone, iPod touch, or iPad. AirPort Utility: Apple shrunk down its wireless network configuration tool to fit on iOS devices, offering a welcome mobile utility for setting up and troubleshooting your Wi-Fi network.

Apps for Professional Development Twitter App (free) Twitter is one of the most active and beneficial social networks on the web. All educators would be wise to join the conversation. 30 Examples of Stunning iPad App Interface Design The iPhone ushered in an era of beautiful interface design unlike anything we’d ever seen on a mobile device. This trend is now being revived and pushed further than ever on the iPad’s larger screen and the results are amazing. We’ve combed through the App Store to bring you 30 iPad apps with gorgeous interfaces.